Attractions in the Everglades

The Magic and Mystique of the Everglades

The television series The Everglades did not have a long run at one year, but it did star Ron Hayes (1929 - 2004), who was a committed conservationist.

Hayes played a law enforcement officer on the TV show, but in real life, he was keen on preserving the Everglades area of Florida, and with it, the wildlife, native plants, people, and historic mystique that have grown up around the river of grass.

From time to time, questions over the Internet ask who played Lincoln Vail on the television show, but most people don't remember either the series or the star. However, the Everglades are under protection as a natural phenomenon and historic place in America and continue to be well known. Efforts of people like Ron Hayes, the Department of the Interior, the National Parks Service, and the American public make it so.

Lake of the Holy Spirit

South Florida is the only region of the state where ethnic foods are as popular as general American cuisine.

Not many people live in and around The Everglades, since most of the area is a US national park. In Everglades City, most employed workers are found in careers in tourism, especially with Marriott Vacations, and in truck driving with DTL Transportation and R.E. Garrison.

The city has most recently become a fishing community, so agricultural/commercial fishing - including crabs - and sport fishing have become big draws. Kayak, fishing, and air boat guides are available to the many guests; and restaurants do well in seafood, alligator, and frog's legs. A Seafood Festival happens every February.

Vacationers can rent cottages on stilts, a picturesque way to send some time, but many people camp out instead.

A Museum of the Everglades is located inside a National Historic Place: a pink commercial laundry building. 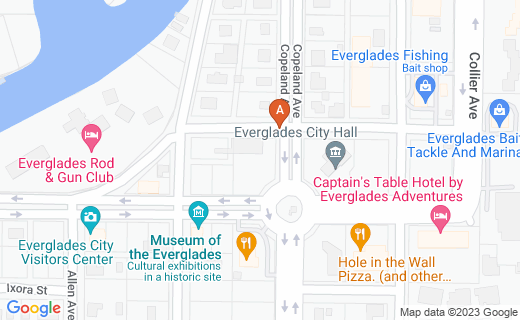 Near Naples and Marco Island, Everglades City is located in Collier County, Florida and has a population of just under 600 residents. That's a small town! Its fame is its Gulf Coast Everglades Visitor Center and reputation as a gateway portal to the national park. Tourism is a big business in town and the locations around it.

The town sits on the Chokolosee Bay of Barron River, just south of Parallel Routes 41 and 90 and beside the local airport. That makes it handy to fly in to the national park region, or to drive in easily. From there, many guided tours are offered.

Frakahatche Strand State Park is just north of Route 41/90 and is also an interesting excursion. Big Cypress Natural Preserve is connected to that just to the northwest on both sides of the major interstate highway I-75. In fact, several parks are located in that area around the interstate.

Big Cypress Natural Preserve is located just south off Highway I-75, which is known as Alligator Alley.

Everglades Seafood Festival: The-s celebration is nearly 50 years old and is held in February every year. Very popular, the show offers a large number of arts and crafts, live entertainment, a wide range of food, and attractions for the kids. Fresh local seafood is the main draw.

Museum of the Everglades: This museum is located right in Everglades City at 105 West Broadway. Local artists are invited to show their works in the museum. In addition, a yearly festival promoting conservation of the Everglades region, Big Cypress, and surrounding areas is a tribute to conservationist Majorie Stoneman Douglas.

River of Grass Greenway: Multi-use pathway across the Everglades. The greenway itself will be approximately 75 miles long, with a separate hard surface trail that will parallel U.S. 41, connecting Collier and Miami-Dade Counties.

Smallwood Store Museum: Located at Chokolosee Island, the store and museum is a US National Historic Site. Opened in the 10,000 Islands of Florida, the store became a museum in 1989.

Tamiami Trail Event: At the end of April each year, the founding of this trail in 1928 is celebrated with walking tours and refreshments. The trail underlies US Highway 41 in South Florida from Florida Route 60 to US Route 1. Completing the original trail (roadway) required 12 years of work, $8,000,000 in funding, 3,000,000 sticks of dynamite, and the labor of an ox called "Blue" in commemoration of Paul Bunyan's blue ox called "Babe." There is no fencing to keep animals off the highway, so you might have to stop for crossing alligators. 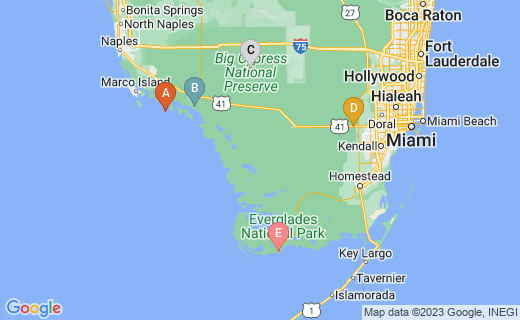 Everglades Patrol
Few people remember the 1950s TV series "Lincoln Vail of The Everglades", but stories of a real life Lincoln Vail in this book describe 30 years of life and work in what became a national park.
Buy Now

Park Boundaries Were Established in 1947

The park has been described in literature as a floating carpet of grass or a river of grass that flows from mid-Florida down to the Gulf of Mexico. Constantly moving and flowing southward, it is exactly such a moving carpet made of a sawgrass prairie that is filled with wildlife of the land, air, and sea, and with native plants. Native Americans like the Seminole groups thrived here early on.

Spanish explorers did not understand the region in the early 1500s and left the lower half of Florida maps blank. However, people in the 19th Century known as Gladesmen were adept at living "off the land" in the Everglades and enjoyed this life until farmers and builders ventured in during the late part of the century.

The Everglades is a fascinating natural attraction and a miracle of creation, since there is not another moving body of water like it in the world. Preservation efforts throughout Everglades National Park constantly restore and maintain the natural moving landmark. In the late 1800s, farmers began to drain the Everglades in search of arable land, but the ecosystem suffered and wildlife and native plants began to die off quickly.

In 1947, a US National Park was established to protect the refurbish the depleted natural habitat.

Wildlife In the Everglades

At least 15 US nationally designated threatened and endangered species live in the Everglades National Park. Birdwatchers can sight over 350 species of birds.

Thousands of alligators live in the Everglades now, but they are still on the protected list of species, because they look much like the endangered American crocodile. To be safe, both species are protected. However, the Burmese python is an alien species of snake and not native to the area. Biologists at the Everglades are determining ways of eliminating them through moving them elsewhere and other means.

At least 90 species of butterflies (some endangered) have been seen in Everglades National Park, which makes more than half of all species found in Florida.