Susan enjoys writing on a variety of topics. She spends time exploring Michigan outdoors and loves the history surrounding the lighthouses.

The Great Lakes surround Michigan. These lakes are massive bodies of water where there is a plethora of shipping industries and plenty of leisure boating. Hence, there is a great need to light up the many bays and harbors. So, along the edges of the Great Lakes, sit over 114 lighthouses—some of them still in operation, and no two exactly alike. All with incredible histories and views. In this article, I would like you to join me on my quest to see and learn about the Northwestern Michigan Lighthouses. Maybe, this will inspire you to check out some of them for yourself.

The Charlevoix lighthouse stands as a short tower, a meager height of 100 feet tall, located in the beautiful town of Charlevoix. At this lighthouse, you can swim in its shadows on the sandy beach just south of the pier, or if you take a short walk up the road, you can see one of the famous, architecturally impressive, thatch houses. Continue the journey, and you can explore many quaint shops and witness the raising of the drawbridge across the channel on US-31. All within walking distance of the lighthouse. The town of Charlevoix has many 5-star hotels to stay at and excellent choices in restaurants should you decide to extend your stay. It is an attractive destination to plan your summer vacation.

History of the Charlevoix Light

The town of Charlevoix was first settled in 1850 and incorporated as a village in 1879. The village decided to improve access from Lake Michigan to Round Lake in 1868 and the first efforts to dredge a channel between the lakes was begun. The first lighthouse was erected in 1885 lighting the entrance to the channel. It was a square wooden structure located on the north pier - opposite to its location now. It was moved to the south pier in 1914 and replaced by its current lighthouse. This Lighthouse was named after the French explorer Pierre Francois Xavier de Charlevoix. The south pier structure is the beautiful lighthouse that can often be found gracing “Pure Michigan“ postcards.

The Lighthouse Led Many Men Back Safely

Just a short boardwalk from the light stands a building that began as a Coast Guard life-Saving station in the late 1800s. It was a bustling station at that time in history, and the Lighthouse led many men back to safety after rigorous rescue operations.

In 1903 the life-saving station became the site of the Charlevoix National Fish Hatchery. It assisted with the populating of many of our species of fish in the Michigan lakes and rivers. In 1918 the old building was torn down, and the building that is the current research station was erected.

The station took a downward turn shortly after being completed - the funding ceased. Then hatcheries operations were suspended because the Great Depression struck America. In 1939 the facility reopened as a rearing station - a place that raises fish for release into the waters. It continued as a rearing facility until 1968 when it became the research station that operates at this location today.

The Robert Manning Memorial Lighthouse is on the water's edge just outside of Empire. The town of Empire is located about 22 miles west of Traverse City and in the center of the Sleeping Bears Dunes National Lakeshore. It is so picturesque that some of Empire's walking trails are found gracing the Sleeping Bear Dunes postcards.

The town of Empire holds quite a bit of history. It once was home to one of the largest lumber companies in Michigan. The Empire Lumber Company was built in 1887 and was capable of producing 20 million feet of lumber a year. The company caught fire in 1906 and was rebuilt, then burned down again in 1917 — this time forever closings the lumber giants doors.

In 1927 Robert Manning was born. He grew up enjoying the life at in a Lake Michigan town and became an avid fisherman. He worked as an insurance salesman, and later a civilian supply person for the Empire Air Force Station. His love of the water always remained though. He was often heard joking with his family that he wished Empire had a light to guide him home. Manning died in 1989 at the age of 62. His family and friends donated money to build what is lovingly dubbed, as the Manning Lighthouse. The lighthouse was erected in 1990.

This lighthouse is the second newest light in Michigan. The latest is the Tri-Centennial Park Harbor lighthouse built in 2004. It is also one of only three memorial lighthouses in Michigan. It stands a mear 35 feet tall, which is small compared to other lights. Its light shines brightly for those seeking the town of Empire.

Tri-Centennial Park Harbor Light, located along the Detroit River. It was dedicated on May 20, 2004.

Robert H. Manning Memorial Lighthouse located in Empire on the West side of Michigan. Erected in 1990.

For those who refer to the lower peninsula of Michigan, a hand is often held up to show location, the thumb being one area, and yes, at about the middle finger sits The Grand Traverse Lighthouse. Construction of this lighthouse began in 1851. The original lighthouse was built on the grounds with a small area for the lighthouse keeper and a stand-alone thirty-foot structure with a fixed light. The original light was constructed with six lamps and fourteen-inch reflectors (lighthousefriends.com).

It was soon found that the lighthouse was poorly situated. It was useful for ships traveling The Grand Traverse Bay, but not for vessels on Lake Michigan. In 1858 the original building was torn down and replaced by the structure that currently stands on the grounds. It is a lighthouse that had the apartment attached to it for the lighthouse keeper with a magnificent staircase leading up to the light.

The lighthouse and the grounds had many changes over the years. A woodshed was added, along with a small barn. Then in 1899, the first foghorn was erected a short distance from the lighthouse. The demands were high on the lighthouse keeper, and an assistant keeper was added to lighten the workload. With this addition, an apartment was added to allow for separate living spaces.

The lighthouse saw many keepers during its time in service, one of them being James Mccormick. He was responsible for much of the stonework that adorns the grounds. He came to the lighthouse with his wife and eight children.
The children enjoyed a summer of bliss swimming in the cold Lake Michigan waters but also experienced many hardships as they fought the winds to go to the privy on cold wintery days. It also meant for them a shivery walk of nearly a mile to the sleigh that would pick them to bring them to the schoolhouse. An excellent book on the life of a lighthouse keeper and family is called

The Way It Was" Memories of My Childhood at Grand Traverse Lighthouse. This book was written by Betty McCormick, one of the children of James.

The light became electrified in 1950 and keepers remained until 1972 when the last of the keepers left. The lighthouse soon became a place for raccoons, bats, and squirrels causing the house and grounds to fall into disrepair.

The organization that is now called The Grand Traverse Lighthouse Museum took over the structure in 1984 and after a great deal of work and restoration opened a portion of it to the public. Even one of the original McCormick children became involved in the repair. Douglas McCormick was able to locate many of the unique items from the original lighthouse and lived on the grounds during the renovation period.

This lighthouse is well worth the trip to see and while you are there take time to enjoy many of the restaurants and sights in the Grand Traverse Bay area. While you are there, take a step back into time and picture what it would have been like to grow up in a lighthouse.

Visit this lighthouse, and you will be standing on the 45th parallel or halfway between the North Pole and the Equator. This lighthouse though not a giant stands 35 feet tall. It is positioned on a hill, so its focal plan stands at 46 feet with a light that shines for thirteen miles. It was built in 1870 and is an exact copy of the MaMa Juda Light, built in 1866, located on the Detroit River.

This lighthouse sits on the end of a Peninsula, dividing the Grand Traverse Bay into the East and West Arm. The need for this lighthouse was realized when a large ship hit a shallow reef and sank. Money was set aside for building this lighthouse before the Civil War times - but due to the War, it was ten years later before it was constructed. The lighthouse was erected in 1860 and lit on September 10, 1870. It continued keeping the water safe for Mariners until it was decommissioned in 1933 and replaced with an automatic buoy light just offshore.

The lighthouse sat empty for over ten years, slowly declining in the Michigan winters. In 1948 forty-three Peninsula residents raised $1900.00, so the township could purchase the lighthouse and the surrounding property. During its years of operation, only seven lighthouse keepers lived at Mission Pointe, and they kept the grounds pristine. Now, several caretakers have lived in the lighthouse and helped in the restoration. It continues to be a prime lighthouse for visitors and caretakers. Updates continue to the lighthouse and the grounds. For a small fee, you can climb the stairs, see the 5th Order Fresnel Lens, the fantastic views and tour the museum. The admission to the museum and gift shop purchases all help in the continued restoration of this National and State Historic Site. 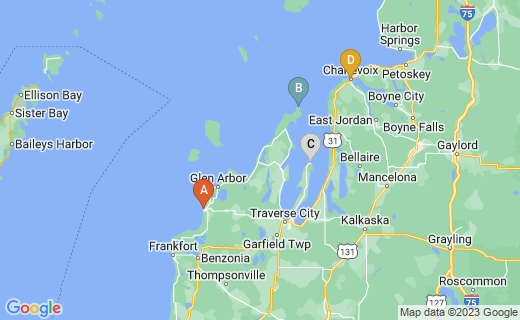