The City of Lincoln, in England, together with the adjoining town of North Hykeham and the village of Waddington, had a reported population in 2011 of 130,200. Lincoln is known throughout the world for it's historic cathedral, which was built around the 1200's, and the slightly older castle. It is also famed for its Roman remains, and the Christmas market, which is set in the beautiful uphill area. But what of the shopping area to the south, "down the hill"?

The main shopping area comprises an array of larger stores, with a few independent traders. Some of the shops themselves are in old buildings, notably the Stokes Cafe on the "High Bridge" which can be seen in the video. This bridge is believed to be oldest bridge in the United Kingdom which still has buildings on it.

This text accompanies the video.

Walking from south to north, past the well known stores along the pedestrian precinct, you could be in any town - but occasionally you may notice some quite unusual sights. A little way along on the right hand side, there is the "speakers corner", where the High Street joins with the Cornhill - an open space where occasional events, rides etc. are sometimes to be found. Just past Boots, on the opposite side of the street, is St. Benedict's Church, which dates from the 1600s. Today, this is still in use by the Mothers Union, where tea, coffee and light refreshments are sometimes on sale.

Continuing northwards, the High Bridge comes into view. Built in the late 1100s, it crosses the River Witham, which continues its journey from the nearby Brayford Pool to Boston. The underside of the bridge is known locally as the Glory Hole. On the left (the western side) can be seen "Stokes Cafe". Stokes of Lincoln was started by the grocer Robert William Stokes, who opened the High Street café on November 22 1937. The bridge itself is believed to be the the oldest bridge in the United Kingdom which still has buildings on it, and the cafe is in a beautiful Tudor building which was built around 1540.

If you were to follow the river to the west, behind the cafe, after a few minutes walk you would come to the Brayford Pool, home to pleasure craft and swans alike, and the University of Lincoln, 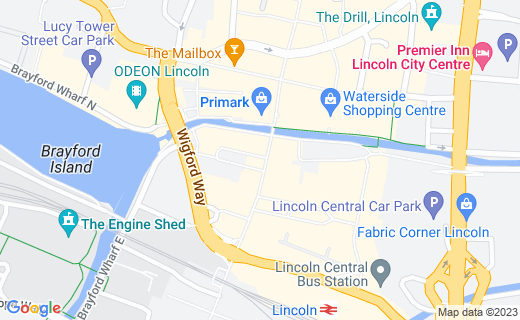 Just past the cafe and to the right is the Waterside shopping centre, which was built on the site of a large Woolworth store in 1991 / 1992.

Straight ahead from here, looking north, is the "Stonebow", an early 16th century town building. Forming an archway over the High Street, the second floor is used as the Guildhall, and is home to such items as the sword of Richard II, the Mayor’s posy ring and the Mayor’s Chains of Office. On both the south and north side of the Stonebow is a large clock. Looking at the archway today, it is difficult to believe that busses used to pass underneath, before the area was pedestrianised!

Passing through the archway, a road (Guildhall Street / Saltergate) is crossed, and this can be seen near the end of this video. The precinct then continues as the "North Precinct" on up to The Strait, the very aptly named Steep Hill, and eventually to the Castle and Cathedral area, which is not shown.