London's Popular Markets You Have to Visit

Markets have been around London since the Middle Ages and currently there are over 300 across Greater London. London’s markets initially began selling farm produce but today have evolved into a bargain hunter’s paradise for almost anything including the quirky. The markets are not only popular destinations for cheap eats but also for the diversity of great foods served by the stalls.

London has a thriving market scene, which includes the covered and outdoor markets. They range from the small neighborhood markets to the large bustling markets. Some open throughout the week while others open on certain days of the week. Therefore, check when a particular market opens before making a visit. However, most start from early morning and close during the early or late afternoon.

London is a great city for markets! They are great places to explore and immerse in the lively atmosphere besides enjoying the bargains and great foods. The following are London most popular markets.

Camden Market is located in Camden Town, a working class neighborhood in northwest London. The market comprises not one but four adjacent markets that include Camden Lock Market, Inverness Street Market, Buck Street Market, and Stables Market. Camden Market features small independent shops and stalls but only the shops open for business throughout the week while most of the 200 street stalls open during the weekends. Therefore, expect a bustling and lively market during the period.

Camden Market is a popular London destination for great bargains attracting both Londoners and thousands of tourists each year. Here you can scour for clothes, accessories, jewelry, arts and crafts, souvenirs, gift items, decorations, and books to name a few. There’s even alternative and fetish clothes as well as the occasional bizarre items that are best not mentioned! The street food scene here is multicultural and most of the food stalls concentrated at Stables Market and Camden Lock Market.

Getting to Camden Market

Borough Market is a famous wholesale and retail food market in Central London that has been around centuries. However, its current location goes back to the mid-19th century and today one of London’s largest and oldest food markets. The market operates from Monday to Saturday but the full market, when all the traders open for business, is from Wednesday to Saturday. Around 150 stalls and small shops open for business during the full market turning it into a hive of activities.

This Victorian-style market is inside a mid-19th century building and a winding maze of passageways and open spaces. The emphasis here is on quality foods and traditions, which makes Borough Market a famous London food market. There’s more than just farm produce and catch from the sea. Here, you’ll find artisan bread, freshly baked pastries, and an array of gourmet foods. There’s also the tempting array of cuisines from around the world to complete the market experience.

Getting to Borough Market

Portobello Market is a popular London street market that stretches almost along the entire length of Portobello Road in Notting Hill. The market comprises of small independent shops and street stalls but the only the shops open throughout the week. Portobello Market is a treasure trove for vintage items, which it is most famous for, though you can find newer items as well. The main market days, especially for vintage items, are Fridays and Saturdays with Saturdays being the busiest of the two days.

Over 1,500 shops and street stalls open for business on the main market days and probably the largest vintage market in London. It’s a bustling and lively market attracting not only Londoners but also curious tourists. Clothes, arts, crafts, books, vinyl records, ceramics, glassware, and furniture are just a few examples of vintage items that you can find here. Newer items include fashion by emerging labels, T-shirts, jewelry, and accessories at affordable prices.

Getting to Portobello Market

Greenwich Market is in Greenwich, a borough in London situated along the south bank of the River Thames. The borough has a rich maritime history and is the only market in London located within a UNESCO World Heritage Site. The current Greenwich Market dates back to the early 18th century but its history goes back further to the 14th century. The covered market features 120 stalls surrounded by a mix of small shops, restaurants, cafes, delis, and pubs. The market is a popular London tourist attraction but not overtly touristy. Market days are from Tuesday to Sunday.

Greenwich Market is popular for its arts and crafts including paintings, glasswork, ceramics, jewelry, leather craft, and embroidery. Here, you can actually see some of the artisans working on their arts and crafts. The market is also popular for vintage items including clothes, accessories, vinyl records, books, and posters. The boutiques here are devoted to fashion by independent labels that include men’s and women’s, jackets, and accessories. When it comes to food, there’s a diversity from the traditional British fare to Italian, Spanish, Chinese, Indian, and Mexican to name a few.

Getting to Greenwich Market

The Docklands Light Railway stops at Cutty Sark Station, which is the closest station to get to Greenwich Market. Greenwich Station is located further but within walking distance. Boats under the London River Services stop at Greenwich Pier, which is a short walk from the market.

Old Spitalfields Market is a huge covered market in the heart of East London in the Spitalfields neighborhood. The market had its beginnings in the 17th century and presently housed in a Victoria-era building. The historic market features over 70 stalls including street food traders (around 100 on Sundays) surrounded by small independently owned shops, restaurants, and cafes. Any day of the week is a good day to visit the market with Sundays followed by Saturdays being the busiest.

The stalls and shops here offer an eclectic mix of items from clothes to foods. However, each day of the week is different with a daily rotation of nearly half of the stall traders. On Thursdays, there’s a fair for antiques offering a wide assortment of vintage items. On Fridays, there’s a fair for fashion by emerging fashion designers and art by talented artists. There’s also a fair for old or second hand vinyl records and CDs on some Fridays. The general arts and crafts market is throughout the week.

Getting to Old Spitalfields Market

Brixton Market is located in the working class neighborhood of Brixton in south London. The neighborhood is primarily residential and multicultural with a large African and Caribbean community. The multicultural character of Brixton makes the market unique from other markets in London. Brixton Market comprises of three adjacent arcades namely Brixton Village, Reliance Arcade, and Market Row. It also includes the street markets on Electric Avenue, Brixton Station Road, and Pope’s Road. The market opens daily except the street markets on Electric Avenue and Pope’s Road, which close on Sundays.

The arcades features closely packed shops, restaurants, cafes, and stalls while there are about 80 street traders at the outdoor street markets. Brixton Market is lively, colorful, and always welcoming towards outsiders. There’s a wide host of items from the shops and stalls including cheap clothes, accessories, jewelry, vintage items, home ware, fresh bakeries, spices, and groceries. The food scene reflects Brixton’s cultural diversity and cuisines from the Caribbean, Africa, India, Chinese, Middle East, Mexico, and Portugal are just a few examples.

Getting to Brixton Market

The Markets on the Map 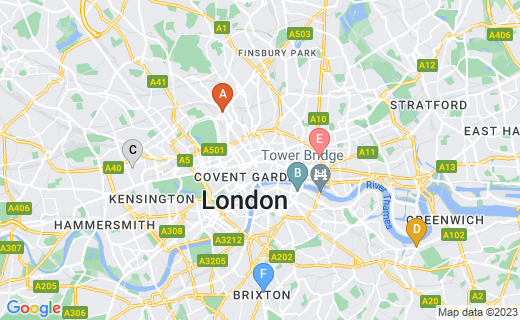