Walking In The Phoenix Park Dublin

Dublin Zoo in The Phoenix Park 1964

The Phoenix Park at 1752 acres is one of the largest enclosed recreational spaces within any European capital city.

The Phoenix Park was established in 1662 by one of Ireland’s most illustrious viceroys, James Butler, Duke of Ormond, on behalf of King Charles II.

Conceived as a Royal deer park, it originally included the demesne of Kilmainham Priory south of the River Liffey, but with the building of the Royal Hospital at Kilmainham, which commenced in 1680, the Park was reduced to its present size, all of which is now north of the river.

About 30% of the Phoenix Park is covered by trees, which are mainly broadleaf parkland species such as oak, ash, lime, beech, sycamore and horse chestnut.

A more ornamental selection of trees is grown in the various enclosures.

If you are one of the lucky ones like myself The Phoenix Park is a great place to go with your family and friends for a free fun day out.

It is also a great place to go if you need some time alone to gather your thoughts. You can walk among the beautiful trees in the Park and search among the wild flowers while enjoying Mother Nature at her best.

The Furry Glen in The Phoenix Park

In the south-western corner of the park is an area known as the Furry Glen which has a series of short walks centred around a small lake with birds, plants and wildlife.

The Furry Glen is an idyllic place to go with family and friends on a sunny day for a great free day out. You'll see squirrels, creatures, wildlife and plenty of beautiful wild flowers.

The Furry Glen in The Phoenix Park Dublin

The Papal Cross in The Phoenix Park Dublin

The Papal Cross was erected at the edge of Fifteen Acres for the visit of Pope John Paul II on the 29th September 1979.

Over one million people attended an open air mass in the park at the time.

The white cross, which dominates its surroundings, is 35 metres (115 ft) high and was built with steel girders. It was installed with some difficulty. After several attempts, the cross was eventually erected just a fortnight before the Pope arrived.

Deer in The Phoenix Park

Fallow deer have been present in Phoenix Park since the seventeenth century when they were hunted for sport by the gentry of the day. The present-day herd is descended from those deer who were chased for enjoyment and hunted for food.

They are wild animals, and their relationship with man has sometimes been a stormy one, like when calls were made to remove the animals to a special enclosure so twentieth-century motorists could drive through the park on the way to somewhere else without having deer wandering the roads and precipitating accidents.

In fact, their wanderings during the Second World War and pressure on space in general in Phoenix Park saw most of 1,200 herd members being officially shot dead. Just thirty-eight animals constituted the herd, following the 1942 cull.

Some 200 fawns can be born each year in Phoenix Park.

As part of a continuing study, hair and nail clippings are taken from the newborn animal for DNA samples, for official records.

Fawns are colour-tagged shortly after birth and allocated an individual identification number.

The herd is normally situated on the 200-acre flat meadow area known as the Fifteen Acres, and in the woodland of Oldtown Wood on its northern perimeter.

The oldest recorded male died of old age in summer 2004 at 14 years of age. His skeleton was placed on exhibition in the mammal study unit in UCD.

By 2005, the herd had grown to some 800 animals once more and a major reduction was ordered by the Office of Public Works. Some 350 animals were to be killed to reduce the herd to a manageable size of 450 animals once more. A deer population of this size was regarded as the maximum carrying capacity of the park. The cull was to be carried out over a number of years taking into account the number of healthy or infirm specimens that are extant from each year of birth.

Herd of Deer in The Phoenix Park Dublin Ireland 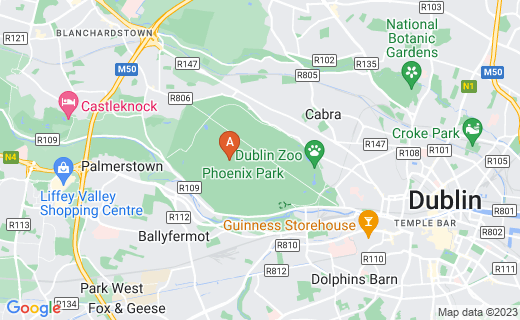 Phoenix Park is an urban park in Dublin, Ireland, lying 2–4 km west of the city centre, north of the River Liffey. Its 11 km perimeter wall encloses 7

Bloom 2014 is taking place in the Phoenix Park Dublin over the June bank holiday weekend, from Thursday 29th May until Monday 2nd June 2014.

Bloom 2013 was the 7th year of the event and continues to attract thousands upon thousands of people every year. Bloom 2013 attracted over 110,000 to the 70 acre site at the Visitor's Centre in the Phoenix Park, Dublin.

A Day Out in Dublin Zoo

Dublin Zoo in The Phoenix Park

Dublin Zoo is much more than a fun-filled day out for all the family. It is a place to learn about wild animals, especially those which are endangered.

The Zoo is a registered charity. Your visit will help to maintain Dublin Zoo to a high standard, improve the Zoo and contribute to conservation programmes.

Located in the Phoenix Park in the heart of Dublin city, Dublin Zoo is Ireland’s most popular family attraction, and welcomed over one million visitors last year.

As one of the world’s oldest, yet popular zoos, the 28 hectare park in the heart of Dublin is home to some 400 animals in safe environment where education and conservation combine for an exciting and unforgettable experience.

Do You Visit The Phoenix Park Often Enough?

How Often do you Visit The Phoenix Park Dublin Ireland?

Cavendish was the newly appointed Chief Secretary for Ireland, and Burke was the Permanent Undersecretary, the most senior Irish civil servant.

The assassination was carried out by members of the Irish National Invincibles.

Cavendish who was married to Lucy Cavendish the niece of British Prime Minister William Ewart Gladstone, and had worked as Gladstone's personal secretary, had only arrived in Ireland the day he was murdered.

He and Burke were attacked as they walked to the Viceregal Lodge, the out of season residence of the Lord Lieutenant of Ireland.

Thomas Myles, resident surgeon at the nearby Dr Stevens’' Hospital, was summoned to render medical assistance to the victims.

Responsibility for the assassinations was claimed by a small hitherto unheard-of Republican organisation called the Irish National Invincibles.