Do you want to see monkeys? Well, just turn up in the old part of Lopburi and you will be besieged by the things.

Lopburi is the capital of the province of the same name and people in each one of Thailand's 76 other provinces know that Lopburi is the place to go if you want to see a profusion of monkeys living alongside humans; quite simply, Lopburi is known throughout Thailand as the monkey town.

When you first see the monkeys of Lopburi the first reaction is usually to smile. However, quite quickly visitors can often feel intimidated by the creatures as there are so many of them and they stroll around the city so cockily.

You can see in this picture how bold they are and how numerous they are too; quite simply the monkeys are everywhere in Lopburi's old town, on the road, in the bins, on the power cables, on roofs, in doorways, climbing on road signs, jumping on cars etc.

On one occasion I saw the police stop the traffic so that a troop of about 60 monkeys could charge across the road without causing an accident; they had just grabbed a great banquet of food from somewhere and where rowdily making off with it and would have caused motorcyclists to have fallen and crashed had the police not intervened.

Another time I was crossing the road after visiting Prang Sam Yord and a pair of monkeys were in the back of a pickup breaking into the luggage that had been left in the back.

Whilst the monkeys of Lopburi are a permanent fixture in the old town and they area constant source of amusement and annoyance, things get really crazy on the annual monkey festival.

In the last weekend of November Lopburi holds the annual monkey festival attracting many tourists, both foreign and Thai.

The locals of Lopburi provide the monkeys with lavish banquets; plates of food, huge decorative sculptures festooned with fruit and peanuts galore with the activities focused on the monkeys' Lopburi stronghold of Pra Sam Yord.

Watch the excellent video clip below to see for yourself the Lopburi monkey festival.

Oh doesn't he look cute? Sitting on his apple, enjoying his banana, this little chap seems so cuddly.

Unfortunately, wild macaques are not brought up to be polite or have good table manners and even though the monkeys of Lopburi are used to humans, they are wild animals and can be dangerous.

Monkeys are very numerous around the old city and they are used to being fed by people; this means they associate people with food which in turn means they sometimes jump on people to look for food.

Mostly, though, the monkeys are easily scared away and don't bite, but be wary of the large males. If you do get bitten go to hospital and get treated for possible rabies!

Where In Lopburi Can You See The Monkeys?

What Species Are The Lopburi Monkeys?

The monkeys of Lopburi are all of the same species; Long-tailed Macaque Macaca fascicularis, this species is also known as Crab-eating Macaque.

Remember, monkeys are not to be confused with apes. Monkeys have tails and apes do not. Baboons, Macaques, Langurs and Marmosets are monkeys. Chimpanzees, Gibbons, Gorillas and Humans are apes.

The monkeys can be seen all around the old city of Lopburi on the roof of buildings, on wires etc. but the best place to take a closer look at them is in the grounds of Phra Prang Sam Yord.

This is the largest single ancient temple in Lopburi and is very obvious when arriving in the old city. Entry to the temple is 50 baht and you can take photographs of the monkeys crawling over the temple to your heart's content. You can also buy food from vendors to give to the monkeys.

At this temple the monkeys are particularly numerous and likely to jump on you, steal your bag or pick your pocket. Be vigilant and don't be scared to ward them off with a handy stick.

Prang Sam Yord is just one of a number of ancient temples in Lopburi - if you want to learn about more of them visit this page: Lopburi, A Town Of Temples & Monkeys.

Lopburi is the provincial capital of Lopburi province, about 150 kilometres north of Bangkok, the capital city of Thailand.

Lopburi is easily accessible by road and it is probably best visited this way as part of a tour around Thailand. The city is also serviced by rail and the station is only a 1 minute walk away from the monkey temple, Phra Prang Sam Yord; you can get there by catching a train from Bangkok's Hua Lompong station. It is also easy to travel to Lopburi by bus from Bangkok's Morchit bus station, although you will have to take some local transport from the bus station in Lopburi to see the monkeys.

Lopburi's close proximity to Bangkok make it a suitable destination for a day trip, particularly if you have your own vehicle; just be aware of the traffic when heading back to Bangkok. 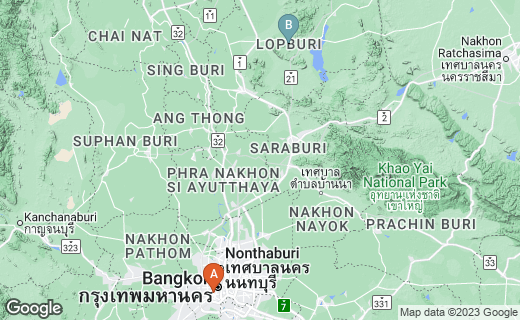 Unfortunately the quality of the hotels in Lopburi is poor; most of the hotels in the old city that I have ever found are grubby and dark. The only hotel that I have stayed in which is of a decent standard is Lopburi Inn Resort which is clean, comfortable and serves good food and a good buffet breakfast is included in the price. This hotel is in the new part of town but is only a short ride away from the monkeys.

What do you think of Lopburi Monkeys?

Are Lopburi's monkeys cute and cuddly or vermicious vermin?

Some More Information On Lopburi

The Rough Guide to Thailand

Personally I prefer the Rough Guide to Thailand, which is clear and informative, compared to the Lonely Planet to Thailand, which gets bogged down on every last temple lintel and its own weird transliteration of Thai which nobody understands. 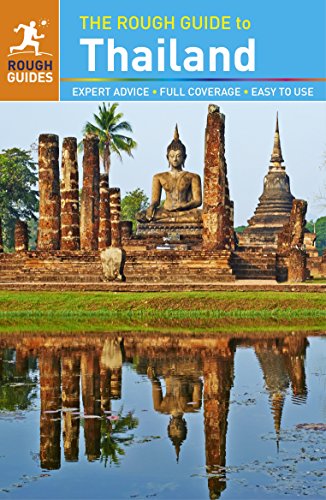 The Rough Guide to Thailand is more wide-ranging in the types of places of interest it describes and I find the way it is laid out to be just about the most user friendly of the main travel guides. This type of guide comes into its own when you first arrive in a town with the maps detailing the locations of recommended accommodation being particularly useful.

This book gives a nice summary of Thai history, affairs and cultural themes while at the same time recommending a variety of places of interest and travel details to places like Lopburi. if you are carrying this around with you it also has the added advantage of being lighter than most similar guides.