Luxor and the Temple of Karnak

Egypt, the setting for the Gold of Mansa Musa

The Temple of Luxor

“I don’t want to alarm anyone, but there has been a grey Jeep Commander following us for some time,” said Ramazani.

“I saw that a while back,” said Ahman as he turned around and peered out the back. “It disappeared for a while and now it is there. Damn. Let’s hope they stay far back and are simply following us. We can lose them whenever we wish.”

“If they were following you would think they would stay back more,” Ramazani surmised.

“Ci, push the emergency button on the communication panel that will connect us to the secret service.”

A voice from the dash said, “Mulatu here.”

“We think a Jeep Commander is trailing us.”

“We think so too. There is a suspicious vehicle moving in on your position. It has been trailing you far back and is now ready to make a play. We have a plan to shake them, that is if everyone is in good shape and can run a short distance.”

“We think if everyone exited the vehicle except the driver, the people trailing you would leave their vehicle and follow on foot. Then the driver would rendezvous with everyone one up the road leaving the others behind.”

“Ahman said, “Let’s do it. I want these monkeys off our back. Do you have a location in mind?”

“We are working on that now…you are on Sharia al Corniche…hold on, here it is. Make a left at the Luxor Museum and drop off the runners at the entrance to the Luxor Temple. The runners would wind their way through the Temple and rendezvous across the street where there is a bazaar of tourist shops. You should be approaching now.”

“I say we do it.” Quentin made the left turn at the Museum. “Everyone grab your weapons and be ready.”

Mulatu continued, “We want the driver to run across the street and find cover behind the building there. When they see the abandoned vehicle in the middle of the street, they will believe that all of you have run into the Temple. When the street is clear the driver would return to your vehicle and we will guide him through the neighborhood to the rendezvous point.”

“Ahman said, “Mulatu, we are going to take your advice.”

Quentin exclaimed, “This is it!” as he slammed the Wrangler to a stop in the middle of the street, grabbed the mongrel and jumped out.

Ci, Ramazani, and Ahman jumped from the SUV and ran up the Avenue of Sphinxes toward the Temple. “I guess we will take the quickie tour!” exclaimed Ci as the trio ran past the dozens of sphinx statuaries that lined the entrance.

“Keep your revolvers hidden as we don’t want to start a panic,” said Ahman. “Hopefully they won’t start firing at us here.” He turned and saw black robed figures jump out of a green Jeep Commander and run over to the Wrangler. One of them exclaimed, “Honaak zehab!” and pointed directly at him.

Ci said, “They have spotted us!”

“Keep running!” exclaimed Ramazani while he grabbed Ci’s hand and pulled her down the path toward the ancient ruins.

Ci looked over her shoulder and saw that half a dozen figures dressed in black djellabas were headed toward her. Ahead were towering stone statues of Ramses II guarding the entrance of Karnak. “Sorry Ramses II, I would like to stay and chat, but I’m kind of busy right now. I’ll plan to come back when I have more time.” They ran through an entrance that led to a court yard. “Where the heck is the Temple? Did we just blink and miss it all?”

“I think it is over here!” Ahman grabbed her hand as Ramazani fell behind.

“The two of you stay ahead of me and I will provide cover if needed,” exclaimed Ramazani. “Run as fast as you can—they are approaching quickly!”

Ramazani looked around at the dozens of tourists milling about. “We do not want a gun battle here, many would die.”

Ahman agreed, “Yes, our best bet is to stay well ahead out of range. I think that is what our boys back in the office had in mind.”

“This way!” Ahman led Ci into the Abu al-Haggag Mosque. They ran up the side porch lined with elaborate stone colonnades engraved with hieroglyphs. They ran into the Mosque.

“We could get lost in here. I would bet this place once had a fairly decent roof. Hey, have you ever been here before or are you as lost as I am?” wondered Ci as they passed through the Hypostyle Hall with its towering columns.

“I have never been here. We should come back sometime when we are not in a rush.” “Let’s go this way and then try to find our way out of here.” She found a long rectangular building off to one side and ran inside. “If we are not careful we will get turned around and miss the rendezvous point.” She breezed by a sign The Precinct of Khonshu standing against the weathered walls of sandstone. Darkness enveloped the narrow hypostyle hall and a solitary beam of yellow-gold sunlight danced across the stone floor.

“I am already turned around,” said Ahman. “If we were going in circles I would not know.” They found an exit and ran across a dusty forum lined with papyrus bud columns. “This way!” she yelled to Ramazani, “We are turning to the right!”

“To the right!” echoed Ramazani who continued to trail behind, “Got it, keep moving!”

“This is it!” said Ci. They had found the front steps and, looking south, they could see the inky figures entering the side porch. “Good, they did not see us. With any luck, they will get lost in there.” Gunfire erupted behind them. “Uh oh—we must go back and see that Ramazani is not hit!”

“No, Ci, he would not want that,” said Ahman and grabbed Ci by the shoulder. “He knows what he is doing. We must keep moving.”

“OK—I hope you are right.” They stepped into the grassy knoll and headed north running down the front side of the colonnade. “This is one hell of a big place. We had better get there soon as I am running out of breath,” panted Ci.

Ramazani came running off the porch with his revolver blazing into the entrance. “Run for your lives—they are nearly upon us!”

“I see the end of the Temple and there are shops across the street!” yelled Ci as she found a second wind, now pumped with adrenalin and ran like hell across the lawn.

“Thank God! Quentin had better be there otherwise we are going to have a blood bath!” he said as he saw the crowd of tourists in the walks across the street. “Run Ramazani!”

They ran into the street filled with traffic. “Where is he?” wondered Ci as she stretched her neck hoping to spot the Wrangler.

“He is not here! Get out your revolver!”

“My God—we cannot fire! All these people will die if they fire at us!”

“Taxi!” yelled Ahman as he signaled desperately at an Arab driver who made a universal gesture with his middle finger.
“Never mind that sonuvabitch,” said Ci as she returned the gesture and stuck out her tongue. “I see Quentin! He is coming around the corner!”

Quentin screeched the Wrangler to a halt. “Get in! Get in!”

Bullets tore into the grassy lawn like killer bees around Ramazani as the black-robed figures followed behind with AK-47’s. Ahman left the back door open hoping Ramazini could make a desperate jump. Ramazani took a flying leap into the back and yelled, “Go!” while he was in mid-air.

Quentin raced the engine and squealed smoking rubber down the street onto Sharia al-Corniche into the traffic leaving the inky figures standing in the street.

Ramazani slammed the door shut as they passed alongside the Winter Palace Hotel. “That was close—too close!”

“My God!” gasped Ci as she pointed out the side window.

“What—are they after us?” wondered Quentin.

“That’s Madonna coming out of the hotel!” Ci found her Coach purse and pulled out her tube of lipstick.

“Wha’—is that all? You scared the hell out of me.”

Jad jumped on Ramazani and licked his face. “Good boy Jad,” said Ramazani as he rubbed the mongrel’s ears.

“He is our lucky mascot,” suggested Ci while she examined her lips in the mirror.

“We are lucky if we have shaken them for good,” Quentin glanced into the rearview mirror….

The "Gold of Mansa Musa" is Book 2 of the "Seeds from Heaven" series.

The Gold of Mansa Musa is available world wide 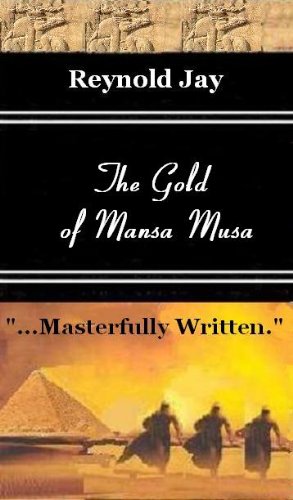 Pyrmids of Giza, Karnak Temple and the River Nile.