The Balearic Islands off the coast of Spain 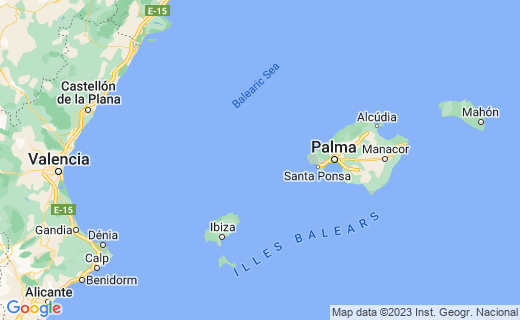 The Balearic Island's of Spain are situated off the Spanish coast in the Mediterranean Sea. Menorca is furthest east and is the second largest of this island group. Its western neighbour Majorca is larger and more brash. Travel a little further west and you will hit the Island of Ibiza a loud dance and club lovers paradise. Finally the tiny Island of Formentera completes the Balearics

Departing from Mahon on the Yellow Catamaran

Whether you visit Mahon the capital of Menorca just once or on many occasions you may find that a trip on The Yellow Catamaran floats your boat.

The boat leaves Mahon harbour on the half hour throughout the day between May 1 and October 31 each year.

Prices have not significantly increased.

Included in the price of your ticket is a leaflet with useful information plus a map of Mahon and one of the island of Menorca.

The Yellow Catamaran operates more services than ever.

Glimpses of our trip and vacation

The Yellow Cataraman sailing out of Mahon Harbour

The Yellow Cataraman boat has an upper desk where you can take in the sun and get a great view of what is on offer.

The lower deck has toilet facilities, a bar and offers shade.

If you do not fare well on boats you may find this lower level best for you. However, there is nothing to stop you chopping and changing.

This in and out approach fits well with the itinerary.

As you reach the mouth of the estuary the catamaran moves out and near to the coast. This is the time the workers on board offer you the chance to go below decks to view the sea bed and its flora and fauna.

The boat is not the glass bottomed boat it claims to be but rather has glass sides in, I think, four chambers. Each of these will comfortably seat a fair few people.

Be warned though it gets hot down there but it does make for fascinating viewing.

As the Yellow Catamaran leaves the harbour a guide gives a commentary in at least Spanish, English and German.

The main highlights detailed are:

Back in the harbour your yellow catamaran may be dwarfed by one of the many cruise ships that sail in for a day or more.

Mahon is the second deepest harbour in the world which is why it was so useful strategically for the British back in colonial times.

The old gin factory, which you will be able to visit when you disembark, is along the harbour front. It is a working, if small, distillery with a good selection of Menorca gin.

Apart from the items detailed above you will see the homes of the wealthy across from the main side of the estuary.

Recommended: This trip represents great value for money and is a lovely way to spend an hour.

Sights in and around the harbour

Five star service for us

All images are (c) Eileen Kersey aka Ethel Smith