Yucatan, Mexico for Vacation or Longer

Maren has traveled throughout central America and writes from the perspective of an open-minded explorer.

Need a quick shot to somewhere warm? Desire some new experiences, but want to avoid overcrowded tourist spots? Is economizing important?  Try Mérida in the Yucatan state in Mexico.  It is safe, convenient, fun, and stimulating.

You heard it. I am an AARP-eligible white gringa. The travel journals, guides, and even the U.S. State Department bulletins* I researched convinced me that my excursion to Mérida, the capitol city of the estado de Yucatan, would be totally peaceful. These authorities did not lie.

Even after I arrived, I checked my ability to roam safely alone and after dark accompanied by a young native woman and an older English-speaking ex-patriot. Ditto, ditto they asserted. There will be no problems. They were correct. 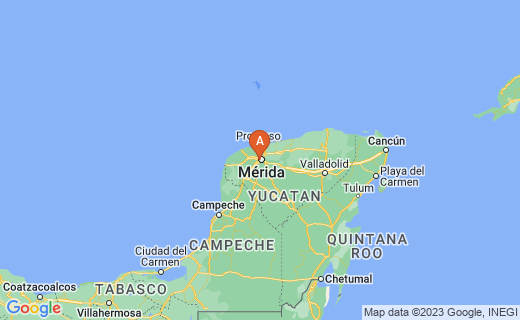 Merida is the capitol city of the Mexican state of Yucatan.

Ex-Pats from Canada and U.S.

There are many American and Canadian ex-pats living in the greater Merida area - so many that they have established a library of English media and have various social networks in place.

Convenience: Mexico is closer to the United States than is Panama. Since Mérida has an international airport, I was able to fly in directly from Houston. I must admit that I am coming from the east coast of the United States. Perhaps those in the west will suggest a more convenient destination. In any case, the Yucatan is closer than South America.

From the airport (MID), a taxi ride into the center of the city takes about 18 minutes.

Since I am a walker, I enjoyed strolling the downtown cultural district, the adjacent neighborhoods, the markets, the churches. There are plenty of eateries, stores, and money changing establishments.

I love to eat. So, when I travel, I taste the local cuisine. For those whose stomachs are sensitive, be advised that Yucatecan food is not the spicy fare in Mex-Tex or chain Mexican restaurants north of the border.

I was surprised at how many entrees use pork. Pigs must have been THE animal of the Yucatan jungle, because pork similar to "pulled pork" is the feature of many of the dishes.

One day, I did indulge in a guided tour of Mayan pyramids and temples. I chose to see Uxmal, and it is incredibly impressive. Furthermore, the citizens are friendly and gracious (except perhaps a handful of aggressive vendors) and want to show you the best their city and country offers.

Mérida is off the beaten “American tourist" track enough that most people I encountered knew only a few words of English. That’s a good thing because they could not “help me” by speaking English. That meant that I could practice my pigeon Spanish (and my charades-acting ability.) I was extremely gratified to realize I could communicate! A bonus is that the Spanish language learning tapes I used free from my public library at home serendipitously had the same dialect used in Mérida.

Also, I loved seeing the Mayan indigenous people continuing to follow their customs without dilution, from what I could tell. The practice of courtesy and respect, especially great respect for elders, was very apparent.

All the Grandmas are Wearing This

That is the bottom line, isn’t it, for a snow bird? If you want to make sure, start tracking the weather conditions on a weather website.

Because the state of Yucatan is heavily populated by ethnic Mayans, it can be useful to learn a few Mayan language phrases (found on the Internet, of course.)

When a young woman vendor approached me with shawls and belts for sale, I was able to smile and say in a friendly way "I don't have any money" in Mayan. This is a gentle joke because any foreigner who can vacation in Mexico obviously has money to spare.

Her face showed her shock and pleasure and she said to me in English: "You know Mayan!" We then chatted a teeny bit in Spanish and a lot with hand gestures. I did not purchase anything and when, after our satisfying chat, she prepared to leave I told her in Mayan language, "God go with you."

It was a very good encounter. I was so happy to have been able to convey my respect for her heritage.

– To prepare for the trip, I strongly advise you to research. As of the time of my trip, the United States had safety advisories issued for the northern and southern borders of Mexico (neither is near the Yucatan.) However, driving a car across the border to reach this warm oasis could add some unwelcome challenges to the vacation.