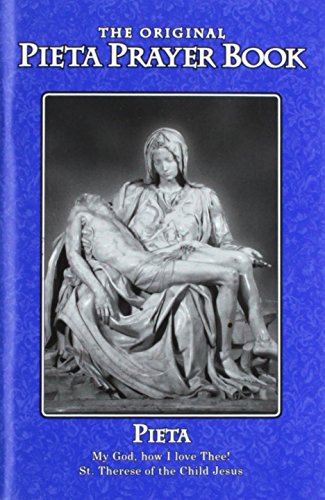 The Pieta Pocket Prayer Booklet (Including the 15 Prayers Revealed to St Bridget of Sweden, and Over 50 Other Prayers for All Occasions)
Buy Now

So what is a Pieta? And why is this one so Special? A Pieta is the depiction of the Virgin Mary and Jesus, often just after Jesus is taken off the cross. It has been done in many different mediums but mostly painting and sculpture. The reason Michelangelo’s Pieta was so special is because of the way in which he depicted both Mary and Jesus. If you look at Mary you see a very youthful face, torn with emotion. When the artist was asked why he depicted her being so young, he replied that the Virgin Mary to him could only ever be young, a symbol of her pureness and closeness to God. Also notice how Mary is holding Jesus with only one arm, and that he appears very relaxed. At this stage Jesus would have just died and we can see the limp and lifeless body of Jesus just down from the cross. (We know Michelangelo was familiar with the study of anatomy, due to his illegal autopsies that he carried out in Florence). This depiction of Michelangelo’s Pieta represents that Jesus was not eternally dead and that he would rise again soon. He also would have been very heavy for Mary to hold with only one arm, however he appears almost weightless.

Michelangelo’s Pieta is also the only work that Michelangelo ever signed. He placed the work into the Cathedral in the middle of the night to avoid commotion. When he returned during the day he overheard people commenting on it and crediting it to another artist. He was so disturbed that he crept in that night and chiselled his name into the sash running across Mary's chest, it reads 'Michelangelum' - his name in latin.

Michelangelo’s Pieta has not been a stranger to controversy, it was once attacked in 1972 by an Australian tourist with a hammer, it is one of the reasons why it is now behind a Perspex screen. The Aussie geologist Lazlo Toth ran at the statue yelling ‘I am the reborn Jesus Christ’, he was detained in an Italian Mental Hospital and then deported but no charges were laid for his attack on Michelangelo’s Pieta..

It is also of interest to point out that very near to his Pieta is the Sistine Chapel, on the roof of which is his most famous work, the Sistine Chapel ceiling. Not only was he a genius at painting and sculpting but Michelangleo also was the architect for most of St. Peter's Bascilica including the impressive dome. It is also said that Michelangelo designed the uniforms of the Popes Medici guards. Truly Michelangelo was a renaissance man.