Montserrat Volcano on a Caribbean Paradise

Follow Hank’s journey as he deviates from his life’s plan and miraculously finds his way to a better, brighter future.

Montserrat is an island in the Caribbean Sea, southeast of Puerto Rico. This island used to be very popular for vacation, but during the decades of 80 and 90 it suffered blows from hurricanes and Montserrat Volcano eruptions that led to the abandonment of the former capital - Plymouth and the south of the island is uninhabited.

The Caribbean has the privilege of having truly wonderful places for a holiday as a time for relaxation, but also gives you the best opportunity to put some adventure in your vacation. This place enjoys a pleasant temperature which varies from 24 º C to 32 º C throughout the year, with constant cooling breezes. The rainy season is from July to November.

Montserrat also is a place of natural beauty and so, many tourists visit the tropical forests in guided tour groups. They can also enjoy the tranquility of the beaches. Plus, diving and snorkeling are very popular as this island is surrounded by reefs full of marine species. The place also offers an extraordinary range of exciting activities on foot, horseback, boat or land transportation and there are all sorts of activities from adventure to cruising and carnivals.

The Montserrat Volcano is the star attraction, easier to see from the Montserrat Volcano Observatory. Tours are conducted by special for several days a week. The ruins of Plymouth are now a ghost town under a blanket of ash. During the day the former capital's access is possible with a police escort that can be arranged through hotels or tourist office.

History shows that Christopher Columbus discovered the island in 1493 and gave it the current name. However, it is not well known until 1632 when the first British settlers arrived. France intended to occupy the island on two occasions between 1664 and 1668 and then between 1782 and 1784, however the British restored power.

This island became more familiar with the eruption of Soufriere Hill, a Montserrat Volcano in 1995 that destroyed the north of Montserrat. And instead of closing their doors to tourists, the brave people of Montserrat saw that destruction was an attractive tourist destination! The rugged terrain covered with volcanic dust is considered an ideal place to take photos and walk among the hills and beaches.

True to his nickname of the Emerald Isle, the exuberance of its extent of 38 square kilometers shows a mild and sunny atmosphere. Once again, the Montserrat Volcano provided a plus. That is, the floor of Montserrat is super-fertile volcanic ash from the volcano that threw over the fields and meadows in this Caribbean island.

It should be noted that Montserrat Volcano is considered the third Caribbean paradise, in order of importance, although it has been one of the islands that have risen to fame by becoming the residence of renowned pop group, The Beatles.

But the truth is that the island is primarily a place of rest and tranquility. The long walks along the beach, swimming in the Caribbean sea, visits to places of interest, and a happening hectic night life is enough to attract tourists like bees to honey. 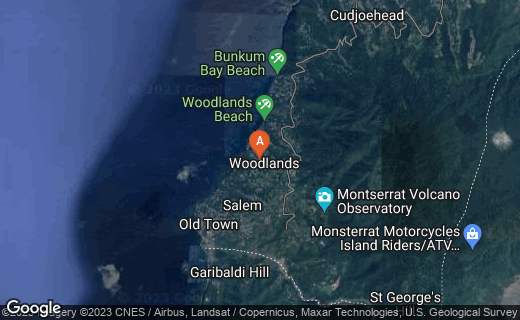