A true story - decide the fate of Matthew Weeks - was Matthew guilty? Charlotte Dymond was murdered on Bodmin Moor in April 1844. Her boyfriend, Matthew Weeks, was arrested. In this fabulously different visitor attraction in Bodmin, you act as a member of the jury in a re-enactment of a real trial from 1844. This is the very building in which the trial took place, Bodmin Shire Hall.

Guilty or not guilty?

The whole trial and decision takes an hour, you'll hear a re-enactment of the trial of Matthew Weeks, but what will you decide? Did he murder Charlotte? Or not? Are there holes in the defence?

Afterwards you can visit the spooky holding cells, just 1 metre square, where prisoners waited for their trial, imagine how it'd feel to be in one of those gloomy cells, knowing you might shortly be convicted of murder - and hung!

Afterwards you could spend hours in a nearby picnic spot, or local hostelry, discussing the facts of the case and arguing Matthew's innocence or guilt! A really thought-provoking day out.

This is a fabulous indoor attraction, ideal when the weather's not great - and great for the whole family.

Stuck where to go on a first date? Wondering where to take your fab new beau? How about something controversial? This gives you heaps to discuss afterwards - and can really sort out if you're compatible, or if s/he's just ... annoying and wrong! Save months of deciding if they're right for you! If they don't agree with you, maybe it's time for the next one :)

On a serious note though, the Matthew Weeks trial really happened. Charlotte really did die. Matthew was tried before a judge in the very building you'll be in. Was there a miscarriage of justice?

So, was Matthew guilty or not? I'll let you find out for yourself.

When Charlotte's body was found on Bodmin Moor in 1844, after a search party went looking for her, suspicion fell on her boyfriend Matthew Weeks, a crippled farm-hand. Matthew had been the last person seen with Charlotte.

Charlotte and Matthew both worked nearby at Penhale Farm, owned by a Phillipa Peter, a 61 year old widow. Mrs Peter ran the farm with her son John, 38, and their three live-in servants John Stevens, Matthew Weeks and Charlotte Dymond. Charlotte had four shillings (£0.20) in her bag when she was last seen alive, which would have been a week's wages at the time.

Charlotte's throat had been cut with a razor. Charlotte's shoes, bag, shawl and gloves were missing and she was discovered beside a stream, where it looked as if she'd been washed. her missing items were found buried close by.

With a potential new beau on the scene, did Matthew and Charlotte row on the moors as she was off to meet the other man?

One book that covers this story is Cornish Murders, by John van der Kiste and Nicola Sly. Published in 2007 this book of Cornish murders includes the story of Charlotte Dymond.

Immortalised in a ballad "The Ballad of Charlotte Dymond", by Charles Causley, the Matthew Weeks' jury found Matthew guilty of murder and he was hanged at Bodmin Jail. But was he really guilty?

Matthew Weeks was hanged at Bodmin Jail on 20 August 1844.

At the time, the case was notorious, the Ballad of Charlotte Dymond helped immortalise the story, but it wasn't until the 1970s that doubts started to be raised about the reliability of Matthew's conviction. Perhaps he was innocent all along.

Pat Munn, a Cornish historian and author, was researching an article about Charlotte Dymond. Pat discovered the original 1844 Prosecution Brief for Matthew Weeks’ trial, sparking off a full investigation of the facts. Pat Munn went on to publish a book in 1978 "The Charlotte Dymond Murder". In her book, Pat Munn carefully goes through each piece of evidence that was presented at the trial, taking it apart, piece by piece.

Pat Munn's conclusion is that, if tried in a court of law today, the evidence would not stand up in court - and Matthew would have been found not guilty.

So popular is the story that the original 1978 book was republished in 2010.

However, a crime investigator disagrees with Pat's findings: http://www.lindastratmann.com/CharlotteDymond.html

Which one do you agree with?

Where to Go Next in Bodmin

Directions to the Courtroom Experience 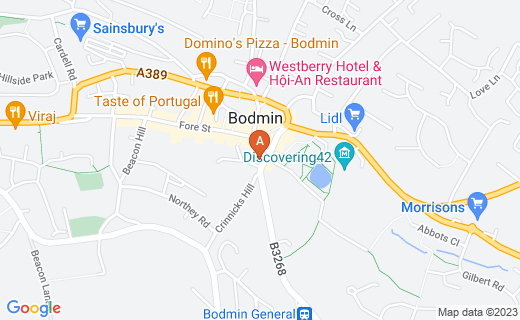 Where, When and How Much?

The venue is in Bodmin town, at the Shire Hall. There are two car parks within 2 minutes' walk of the building.

Opening Hours: Sessions start on the hour, every hour, starting at 11am, last session at 4pm. Easter to end of October Mon-Sat. November-February, Mon-Fri.

As Seen on TV

The trial of Charlotte Dymond's alleged murder by Matthew Weeks was re-enacted and televised.