Close to the famous Sorbonne University and the Panthéon is Musée National du Moyen Âge (National Museum of the Middle Age). The institution is also known as Musée de Cluny, named after its building which was the town house belonging to the abbots of Cluny (and which interestingly was built partly on a Gallo-Roman thermal bath). One can easily reach the museum via subways since it is close to the appropriately named Cluny-Sorbonne stop.

My original motivation to visit the place is only the famous "the Lady and the Unicorn" tapestries in it's collection. However, after a tour from one fantastic thing to another, I come to the conclusion that the everything else the museum has to offer is worth seeing too. 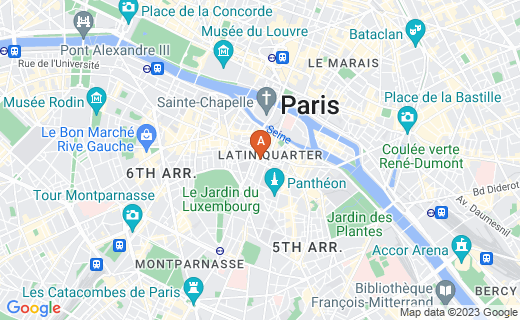 Despite the name, the museum does not cover all aspects of medieval life. It is dedicated solely to artworks from the era in all imaginable forms, from the majestic like the sculptures that once graced the Notre Dame to the delicate like a rose made of gold foil. The diversity of materials of the works on display is also stunning: stone, wood, textiles, precious metals, gemstones, ivory, etc. The pieces are dated from different centuries, and are collected from many countries as far as Sicily and Turkey. This brings remarkable variety into the collection even to untrained eyes such as mine.

An overwhelming majority of the items on exhibiton are religion-related. One will encounter countless visual representations of scenes from the Bible and of medieval Christian worldview in general (the building housing the collection itself is an illustration of this theme). As a result, the overall atmosphere of the exhibition is sombre and solemn (especially with the darker lighting meant to protect the delicate old works). However, there is still a sense of humour and playfulness lurking around. One will catch it from time to time, often in unexpected places such as an organ-playing pig carved on a church bench or a figurine of a self-important (and fat) magistrate.

Despite the rather restricted number of themes, the creativity and skills displayed through the artworks are simply awe-inspiring. One has to admire and respect the many ways the cross and the Bible could be decorated that the artisans could come up, or the sensitivity and vividness with which different figures are portrayed. Mostly beautiful, sometimes grotesque or macabre, they appeal to one's imagination, and leave behind a certain dreamlike feeling after the visit is over as if one just travelled through time.

The service of the museum is adequate. There are audio guides in a variety of common languages, which fits for a stroll through the collection at your own pace. Of course, the museum also offers traditional tour guide if you prefer it.