When we lived in Arizona, I frequently visited the library. One day I discovered a book named “Fatu Hiva”, the first book written by Thor Heyerdahl ( October 6, 1914 in Larvik, Norway, Died April 18, 2002) I couldn’t put it down until I was finished. His way of using words to described his thoughts and feelings impressed me. Here are a few of them:

The Kon-Tiki Museum contains the balsawood raft that was used by Thor Heyerdahl in his famous 1947 journey from Peru to Polynesia. The Kon-Tiki Expedition was conducted to prove that such a journey could be undertaken with pre-Inca technology and know-how. Heyerdahl wanted to prove his theory that the original Polynesian settlers had sailed in such rafts from Peru. 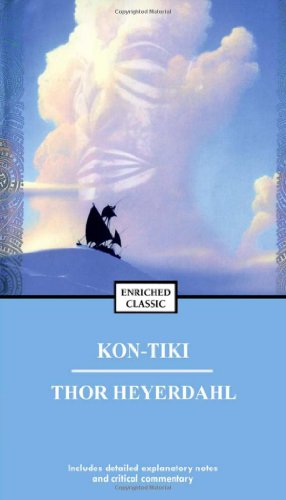 Kon-Tiki: Across the Pacific in a Raft
Buy Now

I had the idea that man was a slave of his own little time keeper. Continuously, it told him to move, to rush, to get ready. Time was supposed to be money. These islanders had plenty of time. Thus they were rich. They had no watches. Time took on a new dimension when it was measured by the sun, birds and the appetites rather than hacked into seconds and hours.

Thor Heyerdahl and his new bride went on a real adventure when they left their busy city life and went “back to nature” which is what fatu hiva means. They sailed on a ship to one of the Marquesas Islands. It was an experience which meant a lot to me as I have left my home of 21 years to try to make my new home in the South Pacific.

Civilized man had declared war against his own environment and the battle was raging on all continents…In fighting nature, man can win every battle except the last. If he should win that too, he will perish, like an embryo cutting its own umbilical cord. All other living creatures could exist without man; they did exist before man. But man could not exist before they were present, nor could he survive after they were gone.

What cascaded down over several days in temperate countries, cascaded in a single violent shower and then the sun peeped through the escaping mist to paint a peaceful rainbow over the palm-filled valley.

As long as they lived, the islanders never put on shoes. Their feet were too big. But after death when the shoes no longer hurt, they had new, white tennis shoes put on.

Wherever we walked, wherever we looked, we were filled with new impressions, new sentiments, changing emotions. The lights, the colors, the sounds, the perfumes, the touch, the shapes were never the same, and were always playing on our minds like a vast orchestra. We could hardly take in more music. At home, the four unchanging walls, the same dead furniture, the never-changing electric light, made us crave for music, for something to keep us alive in our hideouts deep inside our eardrums.

As city people, we had been secondhand customers of the environment; now we were directly part of it and had the strong impression of nature being an enormous co-operative where every associate unwittingly has the function of serving the entity. Every associate except man, the secluded rebel. Everything creeping or sprouting, everything man would spray with poison or bury in asphalt to make his city clean, is in one way or another his humble servant and benefactor. Everything is there to make the human heart tick, to help man breath and eat.

The word instinct is nothing but camouflage. Learned men use it as a scientific term to hide from ordinary people the fact that they don’t know the answer. If we call it instinct, it becomes science; if we call it the Holy Ghost, it becomes religion.

We tell carefree islanders to abandon their ancestral huts in order to sell them imported materials. In order to sell them civilized clothing, we tell them not to expose their bodies even to the tropical sun and to stop making bark cloth, and we fool them into forcing shoes upon their healthy feet. We train them to eat bread and canned food instead of coconut and fresh fish, in order to make them dependent on imported grain and other expensive provender. We tell them to work; to work for us so as to be able to pay us for what we want to sell them. For though we seldom admit it, white man went to these people in order to harvest for white man’s further progress.

We have tablets to make us relax, and liquor to make us happy. Our doctors prescribe the calories and vitamins we need to be properly fed. We are, therefore, greatly advanced compared with the people we came upon in Polynesia, who from sheer ignorance, ate and drank just what nature gave them and thus by no merit of their own happened to be healthy as beasts. Formerly, when a Polynesian woman was pregnant, she merely stepped behind a bush and soon emerged with a new child. The reason why so many of them now struggle with child-bed fever is that they were so quick to pick up our diseases, and so slow to catch on to the need of building their own hospitals.

Any device that saves us from using our muscles is a blessing? To save physical labor, we add motors to vehicles, to bicycles, to dinghies, to lawn mowers, to razors and toothbrushes. And we sit. We sit and do overtime to pay the bills for these gadgets, and run to our doctors because we are overworked, overfed and stressed. The doctor presents another bill and tells us to do exercise, and then we build a bicycle without wheels or a rowing boat without a bottom. There we sit cycling or rowing without getting anywhere, trying to regain the shape and the health of our progenitors before the motor was invented.

The Polynesians are children of the sun, who live for one day at a time, with little thought for yesterday’s problems and less for tomorrows.

Progress can today also be defined as man’s ability to complicate simplicity. Nothing in all the procedure that modern man, helped by all his modern middlemen, goes through before he earns money to buy a fish or a potato will ever be as simple as pulling it out of the water or the soil.