You must be going on a reasoned train of thought, for first-time London visitors an entire stretch of 7 days or more will go exploring the sights and sounds of ‘mind the gap’ city. Only after that comes the time to fill up our brain box for exploring the English countryside towns that almost took into one’s hand shaping down the years its indomitable heritage and history.In 2011 my spouse was working as an employee to a big four as a due diligence auditor and was awarded with a secondment program for nearly 3 months to visit his clientele site, the age-old British Gas. I tagged along with him for no other reason as such but to explore and cultivate the land of the Queen.Oh hell !! How can I miss ticking up my Bucket list was the 'numero uno' cause to enter the pound Kingdom.

Initially we stayed outside the London metropolis, a suburb 20 miles west of central London called Slough. One weekend we hopped on to a 5 min Windsor and Eton central train from Slough station that departs every 20 mins for 5 pounds. It is like a toy-train tootle, perhaps shortest quickie ever train journey covered from one town to another.

Little did I know some great show was waiting for me there!! The train entered in a platform of a high-street market. I am not giving any hyperbolic explaination, if not as flamboyant as Milan’s shopping arcade or Paris's Galleries Lafayette. A tiny part is a railway station,the other majority area is converted into a Windsor Royal Shopping zone coming out the street facing just opposite to the Castle hill of Windsor.

when all your must-see attraction are ticked at the day’s end you might say to the picturesque town ‘A day spent in a round of strenuous idleness’.

There are dotting few county towns quintessentially and unashamedly English than Oxford, a city so majestic in the first and last impression that even its nickname, ‘The City of Dreaming Spires’, sounds lifted from a classic romance novel. With its medieval skyline of church spires, cobbled streets snaking through the town center and stately gardens adding a touch of greenery, this is a city that perfectly blends old English charm with modern shopping streets, a cutting-edge arts scene and a throbbing nightlife. The word 'Oxford’ buzzes our ear identifying the prestigious world-renowned Oxford university thus Oxford always persists being a students’ town.Oxford University is the oldest in English speaking dated back to 1096.Naming the Ex-legendary icons is like calling the roll numbers of genius toppers nominated in the hall of fame. History’s most acclaimed literary, political and science stalwarts like Lewis Carroll, C.S. Lewis, J.R.R. Tolkien, Tony Blair, Margaret Thatcher and even Albert Einstein, have all flipped through pages in the Bodleian library. A mere 55 miles from London ,we have taken a train from slough which took 30 mins to reach the town, even from London it is 2 hours driving along the picture-perfect countryside of Oxfordshire.

Whizzing all the must-do's of the place, at the end of touring university sights,getting a glimpse of students forgather near the bridge of sighs, an air of academician brilliance illuminates on the Oxford sky makes you regret a while 'why didn't I become an oxfordian' !!

There are no Bicycle thief in Oxford !!

The Tudor Town Touring upon Avon !!

In the late 16th century many writers and playwrights have headed out from this small warwickshire market town to London yet none has ever got the renown quite like William Shakespeare.Stratford-upon-Avon is a quaint looking market town with Tudor row houses,half timbered streets capes,a statue of a Shakespearean jester erected on the Henley street,provides with attestation of your right entry to the bards abode.The 100 mile journey to the playwrights home is lot quicker travelling north-west from the London cutting through idyllic countrysides before arriving the heritage site of literary pilgrimage.The word is 'upon' not 'on'just to seperate the town itself.Highlights are:

Unfurling eastwards towards the sea in the anglia side of Cambridgeshire , nearly 50 miles north of London is the Student town of Cambridge.The introduction starts as you get stuck at 'The Corpus Clock'. The fabulously terrifying “Grasshopper Clock” on the corner of Corpus' Taylor Library is a must-see for any Cambridge visitor.It is one of a kind invention in 2008. 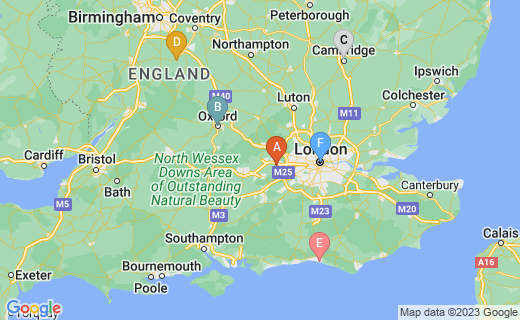 Brighton is 54 miles south of London .We went for a day trip by Car with my first cousin and our common friends.It took 2 hours to reach the lovely seaside town, on getting outside the Car I sniffed the fishy smell of the legendary Fish and Chips coming from the rows of Fish bars.The place was originally a fishing town which in 18th century emerged as a prosperous town with the subsequent patronage by the Prince Regent.He build a summer resort 'Brighton Pavilion' making Brighton famous apart from its rock and roll beach-side. The Highlights are:

Brighton has a charm all of its own. It may have started life as a humble fishing village, but when the Prince Regent came here for his first ‘season’ in 1783, its status as a fashionable seaside resort was sealed.If you come in a crazy windy day,the seagulls almost fleeting by ones ear,living it up on the pebble beach,picnic gatherings,beach ball, all the frolics get clustered on this ultimate Brighton experience.