What You Have to See in Delphi Greece

My Pursuit of the Delphic Oracle: A Short Story

I think I need to go to Delphi and talk to the Pythia. Since my question for her is of the utmost importance, I need to bring an outstanding offering. I think a half-scale copy of Hermes and the Infant Dionysus is a solid choice because after all, the original is located in the Temple of Hera!

The piece, interestingly enough, suggests the divinity of Dionysus, for Hermes is his half-brother, and yet hints at human emotions and passions. For example, Hermes is playfully engaging Dionysus and teasing the little infant with grapes. Never before have I seen an artwork that depicts a god with emotional aspects.

The Statue of Zeus with his thunderbolt emanates power and discipline. The Statue of Athena hints at wisdom and preparedness. While Hermes and Dionysus show emotion, they also show aspects of naturalism that have been becoming more popular in contemporary art. For instance, the veins in the feet of Hermes are not necessary, but were added in order to emphasize real aspects of a body. The hair on both gods is curled and set apart visually from the rest of the artwork by its ornamentalism. The movement of the body is very fluid and smooth, just like a real body would behave. The contrapposto of Hermes further emphasizes this naturalism when the left leg is relaxed and right hip extended. The hand of Dionysus on the shoulder of Hermes is a particularly touching aspect of the piece.

I feel the Pythia would readily accept this beautiful piece of art because it shows the gods in a kinder light – a more human light. I can identify more closely with this Hermes and Dionysus piece than Zeus or Apollo. I hope to ask her if I will win the Olympics and bring honor to my city! Maybe Hermes will aid me in my endeavor since I’ve spoken so highly of this artwork that depicts him in a kindly manner!

Why Delphi is the Best in Greece

I felt the most surreal and captivating destination on the entire Greece trip was undoubtedly Delphi. It was very secluded and quaint, both of which added to its uniqueness. This ancient little town felt very much alive. It possessed a certain energy that no other city had. I looked upon Athens and it felt too contemporary and touristy, for instance. Delphi on the other hand, radiated this sort of illicit power that I believe the playwrights must have harnessed when they wrote their plays. That power, I believe, originates from the landscape.

I have seen some beautiful landscapes in my short life, such as ones in Alaska and Switzerland. However, almost none compare to Delphi. The snow-capped mountains and deep valleys, the greenery and the loud silences, all came together at once to form this otherworldly backdrop for creativity. Although I didn’t have my journal, I still recorded my thoughts and feelings on video. My feelings just rolled right off the tongue and the playwrights must have felt a bit of this too.

One can’t help but be absorbed in the environment. Next thing you know, you’re in a sort of ‘frenzy’ with all types of spectacles and daydreams whirling about in your head. Of course, I eventually came to the Olympians and began thinking about what happened in Delphi in mythical antiquity. The god Apollo lived in these mountains and slew the Great Python here. Heroes, such as Herakles, visited the Pythia to receive an oracle and Greeks everywhere regarded this land as sacred. I traveled the Pythian road thousands of people before me had walked on. I touched the stones of temples and buildings that were handcrafted by artists hundreds of years ago. Indeed, someone could be inspired to write the tragedies on the gods and men here. The scenery made me think how small I am, and yet how powerful one could potentially be. This reminded me of the plight of Prometheus who never gave up, who always kept fighting the good fight. It also reminded me of Cadmus, who had searched the forest for the pieces of Pentheus and was doomed by Dionysus to be a serpent as punishment for blasphemy.

Playing the character of Cadmus in this beautiful environment is something I won’t easily forget! Acting out The Bacchae in ancient Greece made me feel like I was one of the original actors for Euripides. I am thoroughly convinced the Greek playwrights saw beautifully breath-taking landscapes like the one at Delphi and were simply caught up in the moment – a moment of ‘flurry’ and inspiration that led them to write about the divinities and myths that defined ancient Greek tradition. 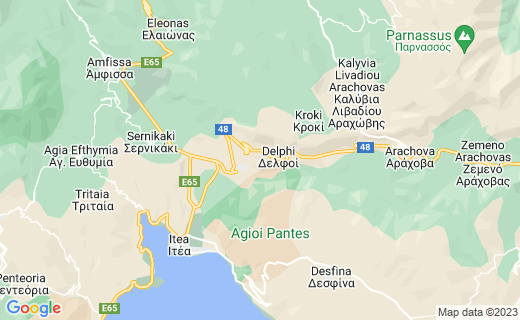