My Trip to Ontario Canada

Labor Day is a great time to get away from home and travel somewhere new, somewhere interesting. One year, instead of spending Labor Day weekend at home my uncle decided to make a trip to Ontario Canada and invited me to come along. I was very excited about it. I had been to Canada before but never to the part where he wanted to go...

My uncle didn't want to stay at a hotel or a b&b and decided to rent a cottage instead. After doing a Google search he found a cottage in St. Catherines, Canada on Nokara Farms and that is where we went.

We left to Canada on Friday morning and returned back home late Monday night. We drove around St. Catherines and went sightseeing to Niagara-on-the-Lake during the day and to Niagara Falls at night, when everything is lit up.

Here is my experience from the amazing trip.

The cottage we stayed at was located on Nokara Farms (St. Catherines, Ontario). It was a cozy two bedroom cottage with a large living room, a fully equipped kitchen, a roomy bathroom, and a large porch. The cottage overlooked Lake Ontario and the view was breathtaking.

I never thought that I'd be living on a farm, surrounded by fruits and vegetables, overlooking Lake Ontario, but it happened and I am so thrilled that it did.

Instead of sleeping in the bedroom I decided to sleep in a pullout couch in the living room. Why did I do that when I could have slept in a cozy bed? Well, I did it all for the view. Lying on the couch and looking straight out the window I could see Lake Ontario, the picturesque skies above, the rustling leaves of the trees and the birds flying overhead. Pure bliss and worth the discomfort of sleeping on a pullout couch. Actually, it wasn't that uncomfortable but of course a bed is always the better choice. In this case the view won me over and nothing else mattered. I wish I could wake up to this kind of view every morning...

The View from the Cottage

The view from the cottage was breathtaking. I am glad that I didn't forget to bring my camera along with me. I was able to take some amazing photographs of the lake and the sunset... Below are some of these photos.

There was no way we could have left Nokara Farms without going fruit and vegetable picking. The owner of the farm took us on a tour of the farm land and then allowed us to pick fruits and vegetables. By the time we were done we had baskets loaded with plums, peaches, pears, tomatoes, eggplants, onions, red peppers, and melons. We asked how much we owed for all these delicacies but the owner said we owed him nothing. 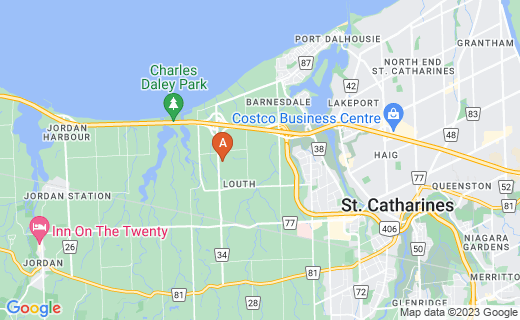 Niagara-on-the-Lake is a town in Ontario Canada and we went to visit it on our trip. It had nice buildings and stores and a beautiful park. I also noticed that there were flower arrangements situated throughout the main street of the town. Even in the middle section of the road that divides the two-way street there flowers galore.

While walking along the main street I saw a couple that was dressed up like someone from the olden days, which was interesting to see. They were nice enough to let me take their picture. I didn't ask them. They just saw me taking pictures and posed for me.

I also came across a lady walking a poodle. I've never seen a dog like it. He was so unique, so beautiful that I had to take a picture.

Another amazing thing that I saw was a monument of sorts that listed the names of the people who swam across Lake Ontario. It showed how old the people were when they made that swim, where they were from, and the length of the swim.

Have you ever visited Niagara-on-the-Lake or other cities in Ontario Canada?

I have been to Niagara Falls in the past but I have never visited it in the evening when everything is lit up. This time I got to do just that. It was really a sight to see. So majestic, so magical, especially with the fireworks overhead.

I tried taking pictures but it was hard to get any great ones because it was so dark. I guess my Nikon camera is not designed for taking night pictures. I managed to take a few that weren't that bad though, which I am happy about.

I am not sure what the occasion was but there were too many people visiting Niagara Falls that night. It was way overcrowded. It gave me a feeling that something big was going to happen. And that's when the fireworks started. The downside was that the fireworks lasted for only a few minutes. I would have thought they'd be for at least twenty minutes, if not more. Oh well. Even the few minutes brought with them lasting memories.

How many times have you been to Niagara Falls on the Canadian side?

My trip to Ontario Canada was an amazing experience and one that I will never forget. I definitely want to return there in the future, hopefully in the near future. And as far as where to spend the night I'd prefer to stay at a cottage on Nokara Farms than at a hotel or a bed and breakfast.