A Spectacular Trip to Texas: A Photo Journal....a Time to Heal

Ecards are easy to send but a snail mail handmade card is a special gift that arrives in our mailbox. Try making some to send.

It is now almost another summer and it is 2021 and much has happened since this article was first written. More of a personal journal for me than an 'article.' My precious sister that I went to visit in Austin received her Angel wings since I was there. It was a painful time for all of us. How thankful I am that I captured the moments we shared not having an inkling that too soon after this trip, she would be gone.

It must be said: hug and squeeze and love (to the extent that you can since we are still restricted some by Covid". Never miss an opportunity to call or text or Skype or Snapchat or whatever means at your disposal with those you love. You really don't have 'all the time in the world."

My Sister at Gordo's in Austin (I was here in Florida....wishing I was beside her)

Woody was My Loyal and Trusting Companion on This Road Trip

Over the river and through the woods.....tralala la la

Driving the 2072 mile trip, as the crow flies and the Garmin leads, to Texas with my silent partner, Woody of Toy Story fame, within the last three weeks was an adventure that I am not so sure I would repeat without a less silent partner and surely one who could spell me on the driving.

Fortunately one of my nieces lives in Bridge City, Louisiana, which was on my way so I was able to spend the night with her while travelling to and from Texas. When I arrived heading to Austin, she had prepared a shrimp boil that was divine. The shrimp had just come out of the Gulf and were cooked perfectly. It was a meal prepared with love and lots of excellent flavors. The very last thing I wanted to do was go out a n y w h e r e after arriving so having such a meal waiting for me was indeed a treat.

When I left, I took about ten pounds of those divine shrimp that were frozen to my sister and her family in Austin. I also took along left-overs from dinner, stowed away in an icy bath in my cooler. When at last my trusty Honda Fit brought me safely to my sister's home in Austin, tired but filled with excitement, we had left-overs for dinner and they were yummy just as they had been the night before.

Enjoying a Break at One of Many Tiny Cafes...

A trip for a number of reasons

During the last five years much sadness has befallen our family, and as a result, we were getting together for funerals and memorial services rather than for joyous occasions.

It just seemed the right thing to do to travel to visit my sister who had lost her second child within two years in May of this year. It tore at our hearts to have lost my niece whom I adored but it was heart-wrenching to see my precious sister so devastated once again.

This visit was a no-brainer. My trusty car would be loaded up and headed off to Texas for a sixteen day visit

We would laugh and talk and 'solve the world's problems' (as we always say) and all would be right within our souls.

We would not, could not change what had happened but we could soothe the raw edges that clearly still are present and calm the savage beast that would devour us and swallow us whole if he could.

Two 'little sisters' together in the same bed once again....just like they would be on Friday nights while they were still children. I would pack up a tiny suitcase and walk the few steps to my sister's room on Friday nights, a room just two rooms over from mine, and 'spend the night' in her bed....We would laugh and talk and talk and laugh and get scolded by Daddy and laugh some more.

At this time all of these years later, we laughed and talked and knew that our Daddy was watching and smiling as he always had and the years melted away, time stood still.

One of my most favorite pleasures on this planet after loving family and friends is enjoying nature's bounty. So being up close and personal with nature while I was there was what I was all about.

Spending time with my sister in botanical gardens and other gardens and even just natural beauty in areas we visited was worth every second of every mile that I spent traveling.

Most of these are random shots...just pretty little faces that had shown themselves to us as we meandered around sharing each other's company in this magnificent state.

Please join me as I revisit just a bit of the beauty we saw while we were together.

Fiery red and orange splashed before us....

The Austin Area was Very Dry

In one of the messages I sent to my daughter while I was away, I texted:

It is scary dry.

Having come from Florida where everything was so drenched in the rains that have fallen and the greens are greener than green, to see the powdery earth all around and the dry brown growth that was evident every where, gave me reason to pause.

A few years back a horrible fire hit in Bastrop, Texas, which is a short drive from Austin,occurred.

Many homes (reported to be more than 1000) were lost and according to one source two lives were lost during this fire. Even one life lost is devastating.

While I was there at breakfast one Sunday the discussion of the outreach that occurred from Austin came up....without a doubt, souls reached out to souls to help in whatever way they could to help those affected to begin to recover.

As I was stopped at a rest area on the way home, my sister texted that Bastrop was on fire again. Reading on line the October 15th report stated that more than 48 'structures mainly homes' have burned but that folks are being allowed to return...and that about 50% of the fire was contained....praying for the best for each member of that community. 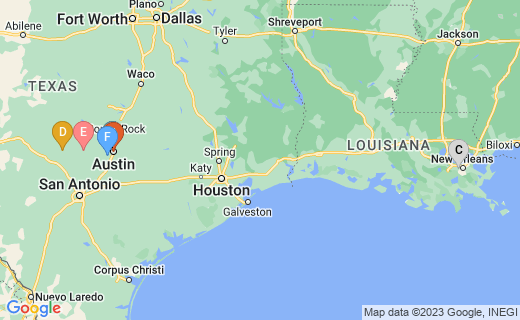 Startling and Magnificent to Behold

One of the greatest thrills of my trip was seeing a Road Runner running (yes, running) along the side of the road as we made our way to my sister's home. Right there in the neighborhood where she lived this bird I had only ever heard of from cartoon fame appeared. And just that fast was gone from view.

About a fourth of a mile later, a second one showed up to make my day. Both were just too fast for my camera.

However the one in the photo was taken by my niece while she was on a trip headed to Arizona.

She kindly allowed me to use it.

Soft Vibrant Yellow Flowers were in Abundance Everywhere We Visited

One of Many Cacti in the Botanical Garden

The Aztec Column in the Center Wowed Me

Another View of These Amazing Plants

This curious little neon green ball was laying on the ground startling in comparision to the brown grasses and twigs that surrounded it.

Unable to determine what it was while I was there, googling revealed to me the osage orange tree and show a fruit that if it is not the fruit it is its 'kissing cousin.'

One of Many Cacti Growing on My Sister's and Niece's Property

Fascinating to Me...Each and Every One

Peaceful Oasis Along the Koi Pond That Stretched on and on

A Beauty Greeted Me One Morning in Fredricksburg, Texas

When I originally wrote this article, I thought I had mentioned that the ground cochineal was used to color foods. One in particular that it is commonly used in is yogurt ...the next time you purchase strawberry yogurt check to see the contents...You may find the dye used is from cochineal.

Thank you, drbj, for reminding me to add this. (Go check out her Matt Damon interview..it rocks!!)

Close-up of Cactus Leaf from My NIece's Yard

A Bit of Trivia

The cactus leaves known as pads or paddies shown have little white flecks or spots as you can see in the close-up. My niece told me they are the eggs from the cochineal bug. The interesting thing about this white matter is that when moistened it becomes a deep red almost maroon but I imagine if large amounts were used the color would differ to some extent.

There are many more in-depth articles on line regarding this topic and carmine the resultant color when mixed with water. For the purposes of this article, in-depth discussion is not provided.

In the video it was demonstrated how a group of the actual bugs are ground, water added, and the resultant color is scarlet...

For much more information regarding

A Few Little Treasures I Brought Home..and Shared Some With My Friends

A Grackle Came to Visit While We Were Dining

Grackle Made My Day

The first time I went to the HEB store with my sister when we got out of the car, there were a number of black birds scurrying around, no doubt, looking for a bit of food.

And then, they made this most unusual beautiful sound...I would almost describe it as a melodious whistle....It was such a lovely surprise to hear as I entered and exited a number of stores around Austin.

My video was unable to capture but one of the sounds and it was a bit faint. On line the videos capture a different sound...not the one I was privy to.

Just had to share this lovely bird with you.

Every Time I See This, I Think....It Looks Like I am Getting Ready to Burst into Song!!!

A Time of Healing

And so the journey came full circle as I pulled into my driveway after 16 days, exhausted but overflowing with joy and love.

As I write these words, tears have found their way into this story. Cathartic tears, tears of love and compassion, tears of letting go of sorrow and moving forth course down my cheeks.

It was a time of healing ....a time to let go of pain and sadness and embrace each new day with our faces held up toward the sun feeling its warmth and the love of a sister who left the planet too soon.