Seafarer Mama/Karen is a joyfully home-schooling parent who holds a B.A. in Psychology and M.Ed. in Elementary Education.

From the outset, it must be mentioned that Providence is a college town and the best way to get around and explore is by foot. Given our schedule on Sunday, I chose to drive my husband and daughter down for a Mythology Tour given to a group of home-schooling families by a docent at the Rhode Island School of Design Art Museum . The difficulty of finding a valid parking space for a few hours inspired us to promise ourselves a train ride down next time. We will drive to Taunton, park at the MBTA commuter rail station, and ride the train in to Providence.

Once we did find a little corner of Providence to park where we were confident that we would not be towed, we walked to the Chace Building, where we met the other families we toured with. The museum offers AAA discounts upon request. Adult tickets are discounted 50%.

The design of the signs around Providence was both cheerful and helpful. They are easy to see and the directions given by the museum staff were very accurate. When we finally parked, we were able to find a friendly student to point us in the right direction to arrive at the Chace building. Providence is a very friendly pedestrian city.

Navigating through Providence to find the RISD Art Museum 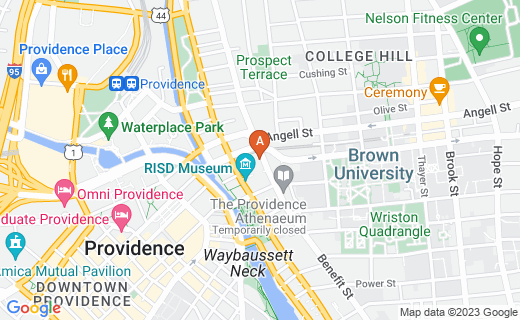 Our Docent's name was Charleen. She was very friendly and enjoyed bringing home-schooling families around the museum. She welcomed us, allowed ample time to ask questions and for the students to share the knowledge they have gained by the materials they have been studying. Everyone was engaged in the tour, and she stopped at points of interest to the children on our way to the mythology exhibits.

The first room we stopped in on our way back to ancient civilizations was the Lynda Benglis exhibit of multimedia modern art. The group observed the 3D pieces presented to decide whether we like them, and the docent stressed the importance of knowing why we like or dislike a piece or style of art.

Quick Flash to the 19th, 2oth and 21st Centuries

The next room we passed through was the 20th Century Room. There we stopped at a red manual typewriter with black keys and a red heart-shaped chair. There were many different types of chair models in that room. Only one of the children in the group was born in the 20th century.The rest were born after the turn into the 21st. The adults were amused at having their own era reflected in a museum.

Our third stop was at a model of the moon by Tristin Lowe. The group was given a sample of the fabric used to make the impression of the moon's surface, which was soft and white. The material was stamped with the circle pattern, and some of them were peep holes that allowed the observer to look inside the model. It was one of my daughter's favorite items on the tour.

The one piece that the group were given permission to touch was of green glass. It seemed shaped like a lady with a whale's tail. The glass was frosted and bubbly, its texture rough. Copper was also mixed into the glass to create the kinesthetic effects it presented.

The group passed briefly through a few rooms filled with paintings composted by American painters, and a sculpture of a dancer by Degas posing in an arabesque . My daughter enjoyed looking at it and noting all the elements of the pose (shape of hands, placement of arms, legs, etc.) and tried to copy it. We practiced more when we arrived home later that day.

The rooms with Mythological representations in art were fascinating, and one could spend hours in each. The pieces we stopped to observe more closely included an Egyptian coffin and mummy (that of Nesmim), a statue of Maat (a goddess with 46 attributes), Ptolemy II with a ritual rattle (sistrum), art student replicas of ancient textiles, and a giant wooden statue of Buddha. The group discussed the process of mummification, the meaning of hyroglyphics written on coffins, different representations of Maat in ancient Egyptian art (especially the scales of Justice, which were used to weigh the heart against a feather).

Charleen, our docent, encouraged the group to walk silently and reverently into the room with the Buddha statue. We discussed the history of the statue, some biographical highlights of Buddha's life, and poses used in Buddhist meditation (the "lotus" position of the legs and the hand "mudras").

The final two ancient pieces discussed were of a dragon (with a tongue of leather to protect its body from the fire it breathed while it protected those it guarded) and a chimera , a Chinese lion figure placed in front of homes, temples, and other buildings to protect those places against evil spirits.

The rooms containing the ancient Ancient Greek and Roman art were still closed for renovation until September 26, 2010. The museum failed to inform the home-schooling group organizer of this when the reservations were made. This was disappointing, but it will give us another chance to visit the museum, which we look forward to.

The final room was the room filled with more modern paintings, and the Degas sculpture. The painting discussed by Charlene before she bid us farewell was van Gogh's Landscape Near Auvers-sur-Oise , dated 1890. It is a van Gogh original that needed to pass through a rigorous authentication process due to its subtle differences in paint strokes from his earlier works. Since van Gogh is my favorite artist, this finale was a grand one for us.

Once the tour ended, my husband, daughter and I spent some time in the museum's historic house exhibit, Pendleton House. This house is reminiscent of walking through the Isabella Stuart Gardner Museum in Boston, with its diverse collections, inlaid furniture, and an enclosed courtyard. When we return, I would love to spend more time in the room with the Japanese Woodblock Prints, among others.

The Area Surrounding the Museum ~

On our way back to our car, we passed by several points of interest to us, for which I have provided photos. One was a house that seemed like it dates back to the turn of the 18th or 19th century, with a classic style dome behind it. The other was a park full of more modern features. My daughter had fun playing near the fountain for fifteen minutes before our ride back to Massachusetts.

Providence is a very walkable city, and if you stay overnight during the summer, you can catch the "Waterfire" on a Saturday night, or visit the zoo at the Roger Williams State Park. The canals are inspiring place to explore and enjoy a family picnic.

Links to RISD and other cultural attractions in Providence, RI

The art of interstate exploration...

Did reading this hub inspire you to visit Providence and the RISD art museum?