Have You Visited Napa Wine Country?

Napa - A Small Wine Town With a Big Draw

Napa is located away from the hubbub of Sacramento or San Francisco, in a quiet country location. Napa has an old town of charming shops, a modern shopping center and a few strip malls. Excellent restaurants line the touristed areas of Napa and the vineyards are the main attraction, with their events and tastings. Thousands of tourists flock to Napa annually for the charity and culinary events that make this region so famous. Celebrity chefs and famed vintners call Napa home.

Originally home to Native people as late as the 1830's, Napa became a part of the new state of California in 1850. Today, a large mix of Native, Latino, and European descendants make up the population residing in the Napa region.

With over 300 vineyards, there may be too many to choose from! Wine tastings and winery events are constant and annual happenings in the area and include the following vineyards (this is a truncated list):

Another enjoyable way to enjoy the Napa wines in one place is to ride the "Wine Train." Napa Valley Wine Train - This is a popular excursion train that departs nearly daily within Napa. Special events include dinners and tours. Those who would like to ride the Bay Area Rapid Transit (commonly referred to as the BART train) from different Bay Area regions - from the South Bay, San Francisco, Berkeley, and Contra Costa county areas - will find it an easy ride to the city of Martinez. From Martinez, the Wine Train can transport the wine enthusiast straight into the heart of Napa. Another way to reach the Wine Train from San Francisco is to take the ferry, which disembarks in Vallejo. In Vallejo, a Wine Train bus escorts travelers to the Wine Train. Because of the popularity of the Wine Train, advance reservations are recommended.

Here are some winery special events the Wine Train hosts: 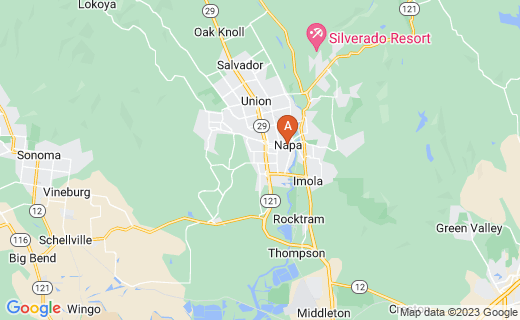 It was Charles Krug who is universally acknowledged as the one who was first to begin a commercial enterprise of raising grapes to convert into wine, in the year of 1861. By the 1940s, the Napa Valley Vitners was formed. The NVV banded together to promote and market wines and attempt to put California on the international map, as a player. It wasn't until the 1970s that Napa arrived as an equal to European wine makers.