Unvrso is a lover of nature and technology. He has been writing for HubPages since 2009 on various topics.

The Chapultepec Park in Mexico City

The National Museum of History is located in the Chapultepec Castle, which is found within the installations of the Chapultepec Park in Mexico City. The National Museum of History includes fifteen showrooms that display a vast collection of pre-Columbian old manuscripts and objects that illustrate almost 400 years of Mexican history, including the establishment of the Spanish Empire, the Spanish colony, the Mexican War of independence, the reform movement and the Mexican Revolution of 1910. In the present , the museum exhibits over 150,000 items, including documents, jewelry, weapons, paintings, dress garments, numismatics, furniture and flags, all of them relating to the political, social and cultural history of Mexico.

The Chapultepec Castle became the Headquarters of the National Museum of History in 1944.

The oil paintings and sculptures depict scenes of historic and popular type. During the viceroyalty period there was an abundance production of masterpieces of religious origin; however, there were also paintings depicting society and history, including ¨Conquista de Mexico¨; ¨Puesto de Mercado¨; ¨Plaza Mayor de la ciudad de Mexico¨, among many others. In addition, there are mural paintings throughout various showrooms performed by some of the most relevant Mexican artists of the xx century, including ¨La Reforma y la Caida del Imperio¨ by Jose Clemente Orozco; ¨Del Porfirismo a la Revolucion¨ by David Alfaro Siqueiros, among others.

The Constitution of the United Mexican States of 1824

The Flag of the Heroic San Blas Battalion

The National Museum of History possesses a collection of documents and manuscripts encompassing the XVI and the beginnings of the XX century. In addition, it exhibits the flags and emblems which gave identity to many episodes of the Mexican history. Among the great variety of manuscripts outstands out for its beauty a document of the Santo Oficio written in calligraphy practiced at the beginnings of the XVII century. Another document of great importance is the first edition of the Constitution of the United Mexican States of 1824.

The museum shows a complete collection of flags throughout Mexico´s history, including the flag of the heroic San Blas Battalion, used during the battle against the United States Army in 1847. For its importance this flag has been used as the representative flag of the National Museum of History, since its inauguration in 1944. The photographic collection includes more than 900 pieces taken by Mexican and foreign photographers, showing various stages of Mexican history. In addition, the museum contains collections of philately, sheet music, maps and unusual books.

In this section are included the objects employed during armed disputes, which stand out for the technological modifications undergone, as well as its manufacture and for having been employed in a memorable historic moment. Many of these objects were of common use from the second half of the XVI century, and to the beginning of the XX century, some of which include swords, knives, rifles, cannons, guns, armatures, this section contains the sword carried by Maximilian I during the time of his capture, and armament that belonged to other protagonists of the Mexican Revolution, such as Francisco I. Madero and Francisco Villa.

This section includes items of personal masculine and feminine use during the viceroyalty of the XIX and XX centuries. Most of the pieces shown are of the civil, religious and military nature that belonged to famous characters, including Miguel hidalgo, Benito Juarez, Maximilian I, Emiliano Zapata, Francisco Villa and Venustiano Carranza, among others. The vast collection includes wardrobe, hats, footwear, coats, pants, shirts, uniforms, dresses, among other items. Among the dress accessories are found cigar cases, matchboxes, tobacco boxes, pocket watches, walking canes and jewelry, such as rings, earrings, necklaces and tight-fitting necklaces.

The collection exhibited in this section reflects the richness in taste and styles between the XVI and XX centuries. This collection consists of more than 4000 pieces, most of them closely related to the characters and historical acts comprising the years from the viceroyalty to the second half of the twentieth century. Some of the most prominent items include the desk on which the Mexican National Anthem was written, the silvery dinner set of Maximilian I and a huge collection of musical instruments, among others. For its great variety and historical value, this collection is considered among one of the most important in Mexico.

This collection includes coins, medals and bills. Some of the coin money is made of silver and copper, although there are others made of brass, nickel, lead, steel and gold. In total, there are approximately 23,000 pieces. The Mexican coins comprise those coined in New Spain commemorating the reigns of Felipe II, Felipe III, Felipe IV, Felipe V, Carlos I, Carlos II Carlos IV and Fernando VII. From the XIX century, those used during the insurgent movements are shown, as well as those used during the Empires of Agustin de Iturbide and maximilian I. In addition to this collection, there are other collections of religious and masonic coins and medals, as well as those from European and American nations. 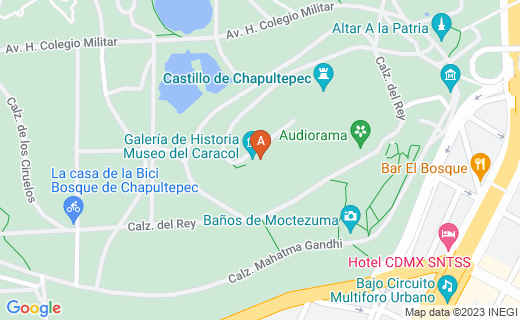