The winds just over Nevada’s border nearly tore the car door from its hinges. Even the dog was nervous about going out into the violent gale, despite her usual eagerness to escape the car and run around whenever the car stopped moving.

Nothing grows in Nevada except tumbleweed and casinos. It is a place of unbridled avarice for some, and deeply pragmatic survivalism for others. The Native people were shoved onto the most barren, desolate pieces of land on this continent, and they have wisely turned it to what profit they can; there is an ironic hint of justice in knowing the white man comes there to fritter away his money, victim to his own greed.

It was amusing, in perhaps a dark way, that the very first thing to see *immediately* across Nevada's eastern border was a casino, merged in an awkward marriage to a gas station, garishly lit up in the midst of that desolate, seemingly endless desert plain.

These are just a few examples, but they tend to come in clusters (Vegas being the Mother Cluster, of course). 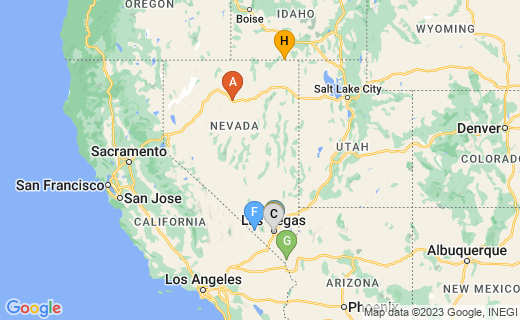 I myself am not a fan, but some of my friends think casinos rock. What do YOU think?

Salt Flats; After the Burning

The salt flats are striking for their utter lifelessness. There is not even the drama of death; it is simply without life. People took the little dark rocks beside the vast white flats and spelled out their names and dates by the side of the road; nothing grows or moves for so long that some have been there fifty years, untouched, perfectly readable. This is the pause between the last gasp of the old life, the death rattle, and the beginning of what is new. This is utter silence; nothing stirs.

Even the few scattered remnants of towns I passed through were eerily silent; people were more like shadows than living beings, walking with furtive airs and downcast faces. Even the dogs, the cats, the birds I saw were notable only for their strange lethargy. As for the buildings, they were old, mostly abandoned and boarded up, with 'FOR SALE' signs pasted or posted over them with a kind of quiet desperation. All this put me forcefully - and unpleasantly - in mind of reading stories as a child about the fabled 'Ghost Towns' of the Old West. I did feel that strange thrill of being in an alien, mysterious place, but I had not foreseen the flavor of despair and sadness that came with these forgotten places.

But even the desolation after a burning on a pyre cannot last forever. The ashes blow away, leaving only what is solid and of substance: the jewels forged in the flames of the merciless pyre catch the fire of the sun and ignite, reflecting beauty and life once again. The Phoenix is made increasingly of these brilliantly colorful jewels with each incarnation, its plumage streaking like fire and water behind it as it launches into the sky for its next flight.

The cycle begins anew; it was eerie to me to see the definite line between Nevada and California, marked out by the forest line. California’s eastern border was indistinguishable from the mountainous beauty of long-ago Colorado; it did not escape me that here was continuity. Here is the spiral pattern again; the echo of what was once known repeating itself emphatically in what is utterly new.

A Thousand Shades of Green

And then, as the elevation dropped quickly to sea level in the final hours of this journey, I drove into new life. The green of those hills is dazzling; the trees magnificent with life, already heavy with fruit. The flowers riot; it is the Shire of Middle Earth, the Summerlands of mythology, the Paradise not lost after all. The tang of the ocean drifts in the breeze, and the cry of seagulls evokes it even when the bay itself is out of sight.

And then the city; yes, this is still the Teaching Place. California is not Utopia, though often it seems to exceed my loveliest dreams. With enough courage and determination - and luck - anyone may start a new life, but we do well to realize from the beginning that it will be fraught with its own pain and its own hardship, though they be of a different breed than the old pain and hardship. There are always echoes, too; the spiral continues and the pattern is uninterrupted.

Knowing you're supposed to be where you are at a given time does not make it easy by default. The hatchling Phoenix has yet to find her wings, and she remembers the sky well enough to resent being earth-bound. When we have not yet taken to the sky, it can be difficult to be patient. Still, better to use the time for healing, for rest, for renewal, for gathering energy in preparation for flight.

The immensity of the redwoods with all their strength and wisdom beckons irresistibly through the mist in the hills nearby; separate worlds lie adjacent, for some never actually touching. There are whole new resources of strength here; new channels of learning, adaptation, and growth.

And the first lesson I am learning here is patience; they will be explored in time, for there is no such thing as instantaneous transformation.