1. Kent Falls State Park, Connecticut. Northwest Connecticut's Litchfield Hills has the state's most rugged and highest terrain. It’s also the best place to find waterfalls. Kent Falls, along the Housatonic River, has the highest drop of any in Connecticut falling 250 feet along a course of cascades separated by pools including a single single drop of 70 feet. A hiking trail follows the falls from its base.

2. Baxter State Park, Maine. New England's largest state park, Baxter State Park is located in northern Maine and contains a 209,500 acres which surround the centerpice, Mount Katahdin (5,270'), the highest mountain in Maine and the summit of a huge mountain massive with multiple peaks above four-thousand feet and arctice-alpine plateaus, Katahdin is a hiker's paradise. The park's legacy is the product of properties owned by Percival Baxter, who donated the land between 1931 and 1962. Today Baxter is largely a wilderness park and there are limits on the number of people allowed in the park on a daily basis. Scattered across the park are numerous lakes and a vast boreal forest mixed with northern hardwoods harboring moose, bear, and bobcat. Rising in virtual isolation from the lowlands the granite Mount Kathadin is considered a monadnock.. Chimney Pond, at Katahdin's rock-strewn base is a favorite hike and one of the most beautiful alpine tarns in the Appalachians. Hiking boots and bug repellant are a must during the summer. There is also snowmobiling during the winter.

3. Camden Hills State Park, Maine. Camden Hills State Park overlooks Penobscot Bay on the coast of Maine and is a nice prelude to Acadia National Park if you’re travelling up coast. Here the hills meet the ocean’s edge and the characteristic pink granite looms over the quaint town of Camden along U.S. Route 1. Mount Battie (780’) and Mount Megunticook (1,385’) are connected by hiking trails which fan out from the park headquarters and campground. Great views are gained from the summit.

4. Mount Blue State Park, Maine. Hiking, canoeing, geocaching, and mountain biking are mainstays at this park which centers around the prominent Mount Blue, which rises in relative isolation to a maximum elevation of 3,192 feet. One of many monadnocks in the state of Maine, Mount Blue seems to hover over the surrounding countryside with its impressive bulk and height. There are 136 campsites to choose from in the park and it is open year round. Snowmobiling is popular during the winter.

5. Mount Greylock State Reservation, Massachusetts. This 12,500 acre state reservation crowns the state’s high point, Mont Greylock (3,488’) and the adjacent high ground which includes Saddle Ball Mountain (3,248’), and Mount Fitch (3,091’). There’s a road to the summit which is topped by a beautiful monument, the 93 foot Veterans War Memorial Tower, which can be seen for miles. Campgrounds dot either side of the road on the slopes of this Mount Greylock. Numerous hiking trails run through the park including the Appalachian Trail. The higher elevations of Mount Greylock are home to spruce-fir forests characteristic of more northerly latitudes – the only such boreal community in the state.

6. Franconia Notch State Park, New Hampshire. Franconia Notch State Park is located in New Hamphisre's White Moutains and encapsulates the famous defile of Franconia Notch (1,900’), immortalized by Hawthorne in his remarks about the famous rocky profile, The Old Man of the Mountains. The famous profile collapsed a couple of years ago after years of steel reinforcing gave way. Just as well known to this start park are the abundance of waterfalls, gorges, and potholes carved from the state's famous granite. The Flume is perhaps the most famous and a trail with bridges and stairs follows a trecherous series of falls, potholes, and gorges. Adjacent to the road (U.S. Route 3) is The Basin, a 30 foot deep giant of a pothole. Hiking is a summer mainstay in this park and trails fan out across the valley an into the high peaks of the White Mountains. Cannon Mountain ski are provides excellent downhill skiing during the winter and the autumn brings great colors to the forests making this state park a favorite for leaf watchers.

7. Monadnock State Park, New Hampshire. Seemingly out of place, Mount Monadnock (3,165’) rises isolated above the southern penne plain of New Hampshire. This isolated prominence naturally aroused people’s curiosity and Monadnock has a long hiking history which dates to 1725. Its close proximity to major urban centers makes it the most frequently climbed mountain in the United States with 125,000 hikers per year. The bare, rocky summit gives splendid views. Emerson and Thoreau found the mountain appealing and wrote about it in poems. Thoreau catalogued the mountain’s natural phenomena and wrote one of the first books regarding the mountain’s nature. True to its name, Mount Monadnock is a classic monadnock, a mountain, usually of igneous origin, which rises prominently and often in isolation from other major peaks. Mount Monadnock happens to be mostly schist and quartzite.

8. Fort Adams State Park, Rhode Island. This state park near Newport, Rhode Island is a great combination of history and coastal scenery. The huge masonry fort, the largest in the United States of its type, was one of many coastal defenses that protected America’s coast in the early years of the republic. The stunning scenery at the mouth of the rocky Narragansett Bay offers a great scenic drive around the Newport peninsula. The fort was started in 1799, garrisoned in 1812, until construction of the present fort started in 1824. Finally completed in 1857 Fort Adams served as an active Army post until 1952 at which times it was transferred to the Navy. The U.S. Navy transferred the fort to the state of Rhode Island in 1965 although some of the grounds are still used for Navy housing.

9. Burton Island State Park, Vermont. Simply put, a kayaker’s paradise and one of a collection island and shore-based state park’s in Vermont Lake Champlain which include Knight Island, Woods Island, Knight Point, and Kill Kare State Parks. Together this collection of parks provides great opportunities to the dedicated kayaker or canoeist for island to island travel in the summer. Burton Island is a 253 acre park and is only open from May 26 to September 5, or Memorial Day to Labor Day.

10. Smugglers Notch State Park, Vermont. At the base of Mount Mansfield, Vermont’s tallest peak is the glacially carved defile, Smugglers Notch (2,168’), named for smugglers who carried goods to Canada during the War of 1812. While the notch itself is in Mount Mansfield State Forest, the state sits just down slope on Route 108. Hiking is popular in the summer and skiing in the winter. Bingham Falls is another must-see attraction just down road from the state park off Route 108. Smugglers Notch is also a great place for leaf watching during the autumn. The rocky cliffs of the notch rise almost one thousand feet and hiking trails fan out across the peaks including Vermont’ Long Trail. 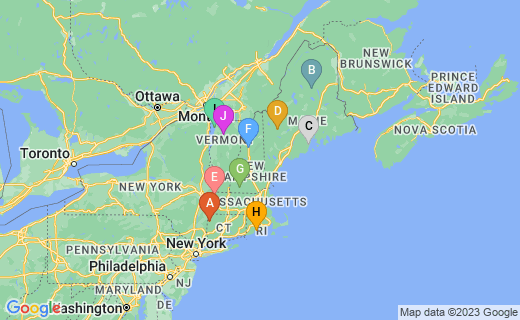