In the Dog House

New Mexico is not called the “Land of Enchantment” for nothing. The state is really quite blessed with its special blend of natural beauty and indigenous Spanish architecture. Visitors to the state should not forget that the “Camino Real” (the royal road), a trade route between Santa Fe and Mexico City, has been in operation since the 1500s, long before the Santa Fe Trail of the Old West began its operation in the early 1800s.

A few years later towards the end of the 19th century, another overland trail began shuttling travelers from the West Coast of California to the high desert of New Mexico. Not surprisingly this trade route was called the California Trail. All total, the commerce brought into the state from these three directions has made New Mexico the thriving and fascinating place that it is today.

Modern-day visitors might enjoy stopping at any one of the many attractions, conveniently located along the state's many highways and byways. These places are carefully selected to show the timelessness of the desert landscape, as well as some of the captivating history of the region that even continues now into the 21st century.

Shiprock – This large sandstone monolith could not be more aptly named, for the towering structure really does look like a ship. The endless plain of desert brush that stretches in all directions from the base of this really big rock, does convey the feeling that one is located upon a great sea.

However, not everyone who lived in or visited the landmark has seen it in this manner. To the Navajos, this was "the winged rock" and to the very first pioneers, who traversed the region, the formation was referred to as "the Needle". Today the Shiprock peak as well as the town by the same town is part of Navajo tribal land.

The four corners, where New Mexico, Arizona, Utah and Colorado meet, is nothing but a modern-day creation of mapmakers. There is no natural landform or river boundary that occurs here. The point is just a perpendicular crossing of two lines created by surveyors. Nonetheless, there is a road that leads to the exact point and a monument, recently placed to mark the spot.

Nowadays, the geographic anomaly, has been incorporated into a Navajo Tribal Park that charges admission. (the four corners mark has always been on tribal land) This financial inconvenience does not have seemed to deter visitors from stopping and wait their turn so they can stand at Four Corners and have their picture taken. In fact, during daytime summer hours, the line can be a bit lengthy with waits of a half an hour or more not uncommon. 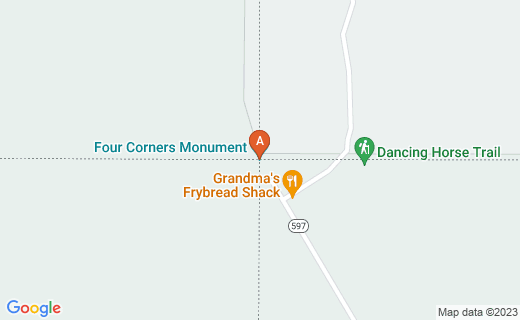 This is the spot where New Mexico, Arizona, Utah and Colorado meet. The four state lines form a perfect 90 degree angle.

The Old and the New

Right in the heart of the nation's oldest state capitol is a park like plaza surrounded my many adobe-styled buildings. Some of this architecture dates back to the 1600s century when the site was first settled by Pedro de Peralta and a small cadre of Spanish priests and soldiers. Many of the streets along with the nearby Cathedral date their existence back to the 1600s.

Today the plaza is a thriving tourist mecca, where street musians and artists cater to out-of-town visitors and Native Americans sell their jewelry underneath the portal of the Governor's building. Also, many of the neighboring shops and galleries are adorned with the art and artifacts of the Old (and New) West.

What To Bring On a High Desert Day Hike

Along New Mexico's highways and byways, there will be many excellent opportunities for short walks and day hikes. Here is a short list of items you might consider bringing along.

if you are traveling west from Taos on NM State Highway 64, you will encounter a steel deck arch bridge that passes 800 feet above the raging waters of the Rio Grande, as it flows south out of the Colorado mountains. This is a great stopping point for picture takers and casual walkers, who wish to take an easy stroll along the top of the canyon rim. A large parking lot and rest area can be found on the west side of the bridge.

The International UFO Museum and Research Center in Roswell, NM is devoted to sharing information about a strange incident that occurred in the July of 1947 during a severe thunderstorm. The actual event took place northwest of the small central New Mexico city, but visitors can learn a lot just by visiting the museum. Hours are 9 a.m. to 5 p.m. daily except for major holidays and admission is charged.

The Church at Ranchos de Taos

Thanks to a remarkable painting by Georgia O'Keefe, the backside of this adobe building is better known than the front. The amorphous forms seen in O'Keefe's painting come from the unique building material, still used in a few places across New Mexico. Known as adobe, the mud and straw mixture has been used to build some of Northern New Mexico's most striking churches such as the San Francisco de Asis Mission Church in Ranchos de Taos. Other adobe churches can be found in the nearby towns of Penasco, Las Trampas, Picuris and Chimayo, along a scenic road called the High Road to Taos.

Much of the old Chicago to Los Angeles highway is gone, but a few picturesque sections remain throughout the Southwest and Midwest. Central Ave. in Albuquerque is one place where a few of the old buildings can be seen mixed in with newer architecture. Be sure to check out Nob Hill, the Kimo Theater in the downtown area, as well as the neon-lighted motels, as you approach the Rio Grande.

Be sure to check out Old Town in Albuquerque, which features an early 18th century Spanish mission, the San Felipe Church, surrounded by many western-styled buildings, which house an interesting array of restaurants, gift shops, galleries and boutiques. This square is located just a few blocks away from Central Ave., just before you get to the Rio Grande. This small enclave, which was established in 1706, was the original settlement that grew into Albuquerque.

Just across NM State Highway 285/84 from the Camel Rock Casino, is the natural rock formation from which the popular entertainment venue gains its name. The resemblance of the windblown sandstone formation to the famed four-legged creature of the desert is uncanny. There is a small parking lot, where you can park and stretch your legs for a better view.

The St. James Hotel in Cimarron

Situated on the east side of the Sangre de Christo mountains is a small town named Cimarron. Meaning "wild" in Spanish, Cimarron is a remnant from the colorful mining days of the 19th century, when gold was being dug out of the nearby hills and this part of New Mexico was really wild.

Though not built until 1872, the non-descript brick building has a guest list that reads like a who's who of famous western outlaws and lawmen. Stay here at the St. James Hotel and sleep under the same roof that harbored Wyatt Earp, his brother Morgan, Jesse James, Doc Holiday, Billy the Kid, Kit Carson, Pat Garrett, Annie Oakley, Buffalo Bill Cody, Bat Masterson and Black Jack Ketchum......Spend a night here if you dare, for the place is reported to be very much supernaturally active at night with the ghosts of the many men, who have been shot to death within the premises.

The Pedernal and Abiquiu Valley

The Pedernal is that flat-topped mountain that you often see in the background in any number of Georgia O'Keefe's desert landscapes. In reality, the distinctive mountain top is visual from both far and near. It is even possible to hike to the top, though hikers should be advised that the climb is strenuous.

For those not in top physical shape, there are other things to do along NM State Highway 84, as it winds through the beautiful valley, where Georgia O'Keefe lived for so long. Any place along the main route will yield eye-popping views of the multi-colored rock cliffs, as well as the famed peak. Another popular place is the Ghost Ranch, which offers lodging, tent sites, RV parking and hiking trails. This place is a must visit for O'Keefe fans.

Hope you have enjoyed perusing my short list of highway attractions in the beautiful state of New Mexico. These are all wonderful places to stop and visit, but by no means should this short selection be considered the final word on places to see. Anyone who spends any amount of time in this fascinating southwestern state is bound to discover just as many interesting sites on their own. For that my friends is the joy of traveling....Happy Trails.