View Newquay beaches without leaving your armchair, with this full list of every Newquay webcam every surf webcam in Newquay - along with a handy map so you know where they are.

The are many Newquay webcams, some now are really fast, streaming webcams - and they can be great for checking the weather, or used as surf webcams to check the surf before you hit the beach.

The first webcam some years back was a pretty poor affair, with just one grubby webcam still posted every half hour. Nobody seemed to clean the lens either.

But now Newquay webcams seem to be getting their acts together and producing some really worthwhile angles and views. Check below for a full list of Newquay webcams.

This is my favourite collection of websites, I just love checking out the Newquay webcams to see what's going on. The weather in Cornwall can change dramatically across just 3-4 miles, so if you're sitting at home and it's raining, there might be a beach just 1-2 miles up the road where the sun's out! It's most peculiar, but checking out these cams might help you find a sunny spot one day when it's raining at your house.

This is a really fast-streaming live video from the Crantock Bay Hotel, looking down onto Crantock Beach.

The Crantock Bay Hotel has an amazing location, right on the top of the cliffs overlooking Crantock Bay, Newquay, Cornwall.  They've also got a lovely garden that's open on Garden Open Day annually.

There are regular activity holidays, such as yoga events, which can be booked.

It was a bit of a windy day when I took this screenie.

From the far side of Fistral Beach, this was the earliest webcam locations, I think it might have even been the first webcam in the UK, but that seems a bit far-stretched. You can see the cam at the Water's Edge Apartments on Pentire.

To be honest, the results from this side of Pentire have never been good, I suspect they suffer a lot from salt spray.

It's not loading at the moment, so might be dead. This one is attached to the former Windswept Cafe on South Fistral, which was sold in June 2010.

it might take the new owners a while to get the cam connected and organised again.

The last screen grab I've got seems to show pink waves! So, colour/light balance was probably a bit off.

The surf webcam at Fistral beach is quite often a good one. It's certainly streaming, so you can actually see the surf conditions. But the angle's really not all that great and it could do with shifting a bit :)

So, here's the first Newquay surf webcam location - on Fistral Beach. It's on the main Fistral Surf Centre.

The photos here are screenies I took when I visited each one. Unfortunately, I'll have to grab a better image at some future point as this one's rubbish.... tide's out and it all looks a bit grim. The sand on Fistral Beach has never been the same, imho, since they built the Fistral Surf Centre.

I love this webcam, it's live and streaming. You can see the waves, the ripples on the water that are making the boats bob up and down. You can see seagulls flying past and people walking up the steps at the end of the harbour beach.

This Newquay webcam is located on the Harbour Hotel, set on the rocks above the Harbour. It shows a sweeping view of Newquay Bay, so you can see the harbour and 3-4 beaches. You can also watch gig racing and RNLI lifeboat launches when they occur.

The images here are screen grabs I took direct from the video - so this is really what you get!

Belushis is a cliff-top backpackers hostel, with commanding views across Newquay Bay, which can be enjoyed from their hot tub in the garden. For beers inside, or outside with the view, there's usually a buzzing atmosphere in and out of this popular bar.

Belushis have two webcams, you can control them, allegedly. The first one that always loads for me is the bar - but often when I try to change cam it doesn't let me do it. I'm not on full/proper broadband though as I use a dongle, so it could be intermittent bandwidth issues.

The images taken are ones I screenied when I last visited.

I'll try to get those other cams loaded and showing shortly.

Dude's Barbers is right opposite the public car park and public lavatories overlooking the bowling green in Fore Street, Newquay. It has a view of The Island and the Bay.

Once you've loaded the webcam page you can press LIVE to see the live webcam, but when I tried it it didn't work.

Screenie I grabbed is a bit dark, but that's because the sun' always behind this building, so there'll always be a big shadow cast.

Update: May 2011: The webcam at Dudes Newquay doesn't seem to be working at present.

Update May 2013: Webcam still not working, but I'll leave it on the list

This is a great Newquay webcam, overlooking the rear of the Victoria Hotel, down onto Great Western Beach,

The images here are some I grabbed so they are actual webcam images to show you just how great this cam is.

On the right in the image, you can see some cars parked. These cars are parked in the Aldi car park (Travelodge is above Aldi), so you can see some great views yourself from their car park.

This video no longer seems to be operating (September 2014)

Narrowcliff is one of the approach roads to Newquay, this cam is on the Surfers Hotel, which is on your left if you've got Tolcarne Beach to your right. If you're not quite sure where that is, this cam is diagonally opposite the new Rocklands Apartment block.

Tolcarne Beach is a private beach, with two beachside restaurants, including a choice of organic foods. There are holiday apartments on Tolcarne Beach too, which can use the private road access and have parking down there.

There used to be a webcam actually on Tolcarne Beach, as part of the Venus complex, but they now force you to become a 'friend' in order to view it.

For mere mortals who are just visiting, you can walk down the road, or down the 130 steps to the beach. There's no parking at Tolcarne Beach, for parking there's plenty around Newquay Railway Station area, both sides of the station.

On Lusty Glaze Beach you'll find an award-winning beachside restaurant on this private beach. Although it's private, it's fully open to the public - the only time you'd find out it's private is if you were misbehaving! So that keeps the riff raff out.

THey have three webcams, so you can choose which angle to view the beach from. One is pointed south, one north and one straight ahead as the surfcam.

UPDATE: Lusty Glaze have been having problems with their Internet connection and getting the webcams live from the beach, until that's sorted out the image is refreshed once a minute

This is an interesting set of webcams, put up by NewquayWeather. NewquayWeather is a private weather station, monitoring local weather.

I've not put links to these as he's running on his home broadband and there is a limit of 5 connections. If you're really interested in seeing these then you'll have to copy/paste the links I've provided above. I don't want to knock his webcam out for people who genuinely need to know what's going on on Porth Beach.

If you're off to do some kitesurfing or are thinking about a surfing lesson at Watergate Bay, check out their webcam first and see if it's just how you like it.

Whether Watergate Bay is Newquay or not is a moot point, but I like to include it for completeness.

The images here were screenied by me when I last visited. Note: it wouldn't load for me today. 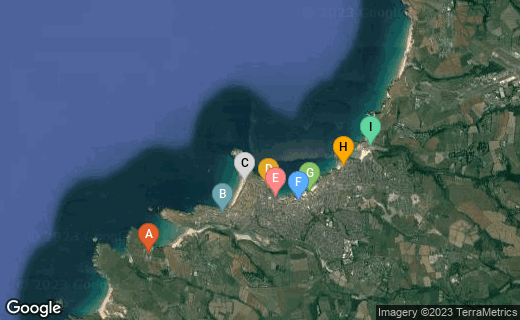 Over time, webcams will be offline for various reasons. Maybe they've broken, maybe they're just not there any more. Below I've listed the Newquay webcams that I have known of in the past, but do not now seem to be working:

The map to the right has omitted Watergate Bay, which is 2 miles north of the top marker, because it'd make the map less readable.