Nickelodeon Universe at the Mall of America

The most famous Minnesota Twin ever is probably Harmon Killebrew. Most fans remember the Hubert H. Humphrey Metrodome, but Killebrew played his games at the old Metropolitan Stadium in Bloomington. After the end of the Twins' (and the Vikings') stint at the old stadium, the land was put to a new use. Today, visitors at the Mall of America can see a home plate monument that commemorates the spot where Harmon Killebrew and other historic Minnesota Twins took their swings before the opening of the Metrodome.

The park now known as Nickelodeon Universe first opened in 1992 as Knott's Camp Snoopy. Later, the Knott's name was dropped and the park became simply Camp Snoopy. The park had a Peanuts theme that revolved around the characters from Charles Schultz's famous cartoon strip.

Nickelodeon took over the naming rights in 2007, and the park now has a number of rides that have themes related to shows on the cable network, including Spongebob Squarepants, the Backyardigans, and the Wonder Pets. There are 27 rides and attractions spread throughout the seven acres that make up the park's floor plan.

The Fairly Odd Coaster at the Mall of America

Roller Coasters at the Mall of America

Nickelodeon Universe is listed as having four roller coasters, although one would not technically classify as a traditional coaster. All of the coasters except for the Pepsi Orange Streak are quite compact when it comes to the surface area that they take up. The Orange Streak meanders throughout the park.

The Orange Streak measures nearly one-half mile in length and takes over two minutes to complete a circuit. Although the coaster only reaches a height of 60 feet and drops a mere 40 feet over its course, the Orange Streak boasts two lift hills and reaches speeds of nearly 40 miles per hour. The coaster goes through a tunnel that gives a view of the park's log flume. The Orange Streak was the original coaster and was a fixture in the park when it opened in 1992.

The Fairly Odd Coaster, FKA the Timberland Twister, opened in 2004 and is a coaster that has a number of drops while the cars twist around. The ride reaches a top speed of 31 miles per hour and a height of 51 feet.

The signature ride at the Mall of America's Nickelodeon Universe is the SpongeBob SquarePants Rock Bottom Plunge. Eight riders can sit on the cars that climb a 90 degree lift to a height of 67 feet. The car then drops at a 97 degree angle to a low point of just six feet above the park's floor. Over a one-quarter mile track that takes just 33 seconds to complete, riders will experience two inversions and a top speed of 40 miles per hour.

The final roller coaster in the park, the Avatar Airbender does not resemble a roller coaster, but rather a couple of spinning seats placed on a giant skateboard. The skateboard then rocks back and forth on a track that simulates a half-pipe. None of these coasters would reach the level of excitement of some of those at Kings Island or Cedar Point, but they can operate year-round in a climate-controlled setting.

Other Rides at the Mall of America

Most of the rides at the Mall of America are kid-friendly, but there are a few others that adults might find enjoyable. The Log Chute is one of the rides that opened with the park in it's Snoopy-themed days. Riders cannot expect to get terribly wet on this ride, but it has a couple of drops and a logging theme.

The newest ride at Nickelodeon Universe is the Teenage Mutant Ninja Turtles Shell Shock, which is a sky fly ride that reaches a height of 72 feet and speeds of 25 miles per hour. Riders have a level of control over the ride as they make their circular trip around the ride's center.

Costs to Ride at Nickelodeon Universe

Although there is no charge to enter the park, there is a charge required for those who wish to ride on any of the 27 attractions. An all-day pass costs $29.99. Those who arrive after 5 p.m. should check on a pass to ride for the rest of the day for a cost of $19.99. Tickets cost about $1 each. There are slight discounts for lesser numbers. Each ride costs between 3 and 6 tickets, so it would be wise to guesstimate whether a pass or tickets would be more cost-effective. Most of the riders are small kids, but adults can find that some of the attractions at the Mall of America are quite fun.

The Mall of America in Minnesota 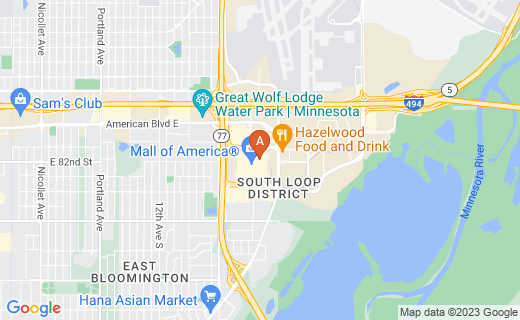 The Mall of America has an indoor amusement park with kid-friendly rides and four roller coasters.