Every Place Has Hidden Treasure

There is beauty in the world wherever we go, I've become convinced of that, though I have not seen nearly as much of it as I would like to. When I moved across the country from Pennsylvania to Northern California a few years ago, I did so from necessity due to my health. The winters in the east, my doctor informed me, were killing my lungs. Repeated bouts with pneumonia over the course of several winters had forced me to quit nursing school, among other inconveniences.

I did not dream I would fall so irrevocably in love with the Pacific coast; my impression of California was what pop-culture gave me, and I had no wish to be part of that subculture as I then perceived it.

My mistake was almost immediately clear to me, as I mentioned in an earlier hub about the end of my cross-country journey. I found that the Pacific was well-named, and that it still possesses a wild beauty that has been largely lost in layers of trash on much of the familiar Northeast Atlantic coast.

However, when my sister came out to visit us, we all found even more reasons to love this place. We explored it together, reveling in its stunning vistas and quiet river retreats.

Even the road to Big Sur is breathtaking - Bixby Bridge itself is worth seeing, and the rocky, beautifully mountainous coastal road interspersed with coastal towns like Santa Cruz, Capitola, and Monterey - each with their own unique charms - make it unforgettable.

In my case, driving that road was also fraught with danger, due to the fact that my sister and my elder son are one of the world's great undiscovered comedy duos. I had to stop the car more than once on the side of the winding cliffside road in order to avoid danger due to excessive hilarity. 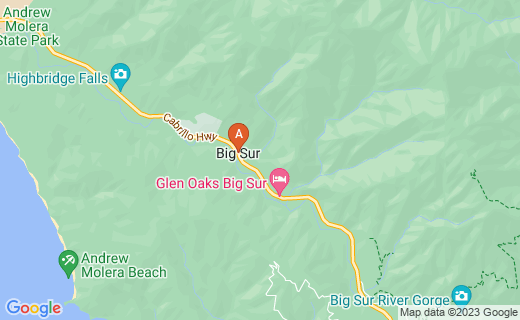 Our hotel was called Big Sur River Inn, no doubt because there is a wide, shallow, mellow river in their back yard. Adirondack chairs have been placed in the river to allow guests to sit with their feet in the cool, beautifully clear water, talking and staring at the rocks and multi-colored pebbles in the river floor, distorted by the gently running water, lit by topaz shards of golden sunlight. It really is an enchanting place, one where it seems hardly possible not to relax.

The accommodations we took across the street from the main hotel are not over-spacious, but certainly more than adequate - and I can pretty much guarantee there won't be cause for complaint in that. There is far too much to see and do in and around the grounds as well as within minutes' drive to wish for more pacing room inside.

The ocean is not visible from the hotel, but breathtaking Pfeiffer Beach is minutes south, and provides such a stark contrast it's difficult to believe you have not been driving for hours rather than minutes. The wind is usually quite strong here, and it never really gets hot; if you go, you will probably want to layer pretty well in order to adjust your comfort level to the temperature and weather conditions.

That said, it is well worth getting one's hair blown into beehive shapes to see this absolutely stunning beach.

Should you tire of the beach itself, the sand and surf and astonishing, sculptural rock formations, there are sandstone cliffs lining the beach with winding little paths in and among them. Both my sons thoroughly enjoyed exploring these paths, although watching them do so at times made me feel a little dizzy. 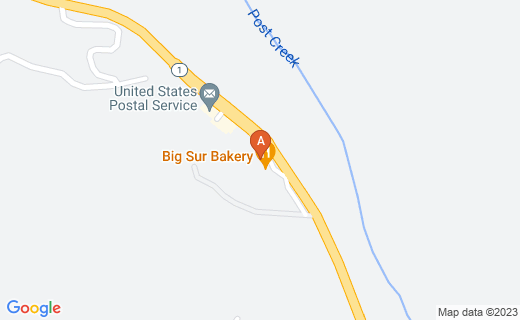 We read several rave reviews of the food and drink available at this place, and were moderately excited to try it. This in itself was a disappointment, since the food and drink were no more than average when we stopped. The sandwiches, lemonade, and coffee were all good, but certainly nothing I would consider rave-worthy. The prices are rather inflated, which inclined me to be more disappointed in the average fare than I would otherwise have been.

That said, however, it is still well worth stopping here because of the gorgeous succulent and cactus garden. There is also a small shop with books, gifts, and artwork which many might enjoy - for us, the garden was the main attraction.

We made a detour further south, to a little beach where adventurers could climb over the rocks near the crashing waves in search of treasure: it's called Jade Cove because there are very large amounts of jade occurring naturally in the rocks at this specific place on the coastline. Anyone who wishes may climb down and carry as much jade with them when they leave as they can - without, of course, beginning some kind of industrial mining operation.

This is not a path for beginners; there's one point on the cliffside that requires climbing with only a rope to hold you. It's not an immense drop, but it's arduous enough to deter most casual hikers.

Our time in Big Sur was limited, unfortunately, so we were unable to explore as extensively as we would have wished to. However, we did manage to hit several truly stunning highlights. Julia Pfeiffer Burns Waterfall was certainly one of them; it is by far the most beautiful piece of coastline I have yet seen.

The waterfall once poured directly into the ocean, but changes caused by erosion in the landscape have in a sense redirected it so that it pours onto the white sand of the beach instead, creating a gorgeous, pristine scene.

The path itself, called Overlook Trail, is not a difficult or challenging one, and is also quite short - less than a mile. It leads under Hwy 1 by way of a slightly surreal, round tunnel, and out to the most stunning of vistas.

The trail ends at the terrace of the former Waterfall House; the terrace is all that now remains of the house, as well as some of the landscaping. There are signs for those who have an interest in the history of the house and its owners, who were friends with the park's namesake, Julia Pfeiffer Burns, and donated it to her memory. There are also benches with views of the gorgeous coastline just below the terrace, affording rest or just contemplation for those who wish to stay a little while.

View to the north from the terrace

The last place of note that we visited on our trip to Big Sur was an adorable place that was a combination cafe and art gallery. The gallery itself is quite diverse in the art it features; some is very sophisticated (surprisingly so), while much of it - notably the garden art - is whimsical instead. Beautiful photography lines the walls, and pedestals hold abstract sculptures, while curio cabinets display carnival glass on their brightly-lit shelves.

It's necessary to pass through the gallery to get upstairs to the cafe, which seemed odd to me since dogs are permitted, and the cafe itself is quite family-friendly. The atmosphere is surprisingly casual, yet the gallery holds an air of elegance almost despite that.

The casual atmosphere of the cafe also belies the quality of the sumptuous desserts and delicious sandwiches available. The food here is everything it was not at the previously described bakery at which we stopped. There is both indoor and outdoor seating, both delightfully casual, though the views from the outdoor seating are spectacular, as one expects of Big Sur. 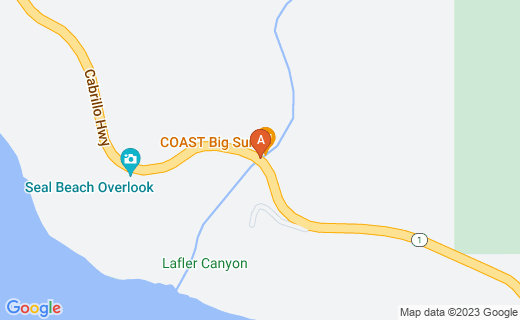 Again, I am certain the photographs can do far more than any amount of words ever could, to persuade anyone desirous of spectacular coastal views that Big Sur is a worthy destination. I hope you've enjoyed the photographs, and if you've been to Big Sur yourself and know of glories I passed over, please share in the comments if you're so inclined! Also, if you do end up visiting, I'd love to hear about your own experience in this beautiful place I now consider part of my home.