Nunavut Territory and the Inuit in Canada

Nunavut Territory Canada and the Inuit

Despite the fact that only thirteen percent of Canadians were aware of its existence, Canada gained a new territory on April 1, 1999. This new territory, called Nunavut, (pronounced noo-na-voot), was carved from the eastern part of Canada's Northwest Territories. Nunavut is bordered by the Northwest Territory to the west, the provinces of Manitoba and Saskatchewan to the south, and Baffin Bay and the Labrador Sea to the east.

Nunavut covers 1,932,255 km2 (746,048 sq mi) of land and 160,935 km2 (62,137 sq mi) of water in Northern Canada including part of the mainland, most of the Arctic Archipelago, and all of the islands in Hudson Bay, James Bay, and Ungava Bay (including the Belcher Islands) which belonged to the Northwest Territories. This makes it the fifth largest subnational entity (or administrative division) in the world. If Nunavut were a country, it would rank 15th in area.

Nanavut Territory and the Inuit People

Nunavut, which means "our land" in the Inuit language, is the first self-governing indigenous territory in North America. Nunavut covers one-fifth of Canada's land area but with only 22,000 people, it has less than one percent of its population. Nunavut's official language is Inuktitut, the mother tongue of 85% of its population.

The Inuit of Nunavut

Eskimos or Inuit, the people of Nunavut

For centuries, the Inuit (formerly known as Eskimos), have lived and survived this barren land--composed mainly of rock, tundra, ice, fjords, and mountains. Now, at long last, they have their own recognized domain, and self government confirmed in law. Most importantly, according to their leaders, they have earned the freedom to create their own destiny as a people, within Canada, North America, and the world.

The capital of Nunavut is Iqaluit, (pronounced ee-kal-oo-weet). Iqaluit is Nanavut’s largest city with a population of 4,000 and lies less than three degrees south of the Arctic Circle. In June it receives twenty-four hours of daylight and in December receives only six hours of daylight. Iqaluit is one of twenty-eight settlements in Nunavut.

The region's main source of communication are radiophones which are often unusable due to solar disruptions. This new territory of Nunavut is not linked by road to southern Canada, so the primary means of transportation to the Canadian core, as well as between villages, is by airplane.

The vast area of Nunavut contains many contrasts. Temperatures can range from frigid during ten months of the year, to very warm in July and August.  The average temperatures in Iqaluit are -22°F (–30°C) in January and 41°F (5°C) in July.  In the west, the terrain is flat with shallow tundra lakes; in the eastern area there are towering fjords, mountains, and icebergs.

Much of Nunavut is uninhabited, although settlements stretch as far north as Ellesmere Island. Most Inuit live in fixed settlements along the coast of Hudson Bay and the Labrador Sea and depend on trapping and mining for their income. There are few roads, and most transportation is by snowmobile and airplane.

40% of Inuit adults participate in traditional hunting and fishing for their livelihood. Seals, caribou, walrus, whales and arctic char are all a fundamental part of Inuit life and their existence.

In the summer of 1999 Canada added another 80,000 sq.km. to the national park system.  It established 3 new parks in Nunavut Territory. These parks are described as northern gems and will be named Surmilik, Auyuittuq and Quttinirtaaq. The Inuktitut names for the parks depict the territories major features: "place of glaciers," "land that never melts" and "top of the world"." The Inuit will maintain their hunting rights within the parks.

Other Facts About Nunavut

The Inuit warmly welcome tourists to their new territory. Nunavut is considered to be one of the last great adventure travel destinations on earth. Nunavut provides unique scenery and wildlife; canoeing and kayaking; and the awesome experience of its vast national and territorial parks. Visitors can also enjoy the distinctively Inuit arts and crafts, take part in local cultural festivals, and sample indigenous gourmet foods. 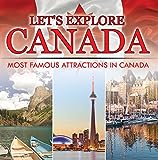 Other Countries and Cultures

Destinations of a Lifetime: 225 of the World's Most Amazing Places
Buy Now

Nunavut and the Inuit of Canada