On the Road With the Cackleberry Farmer

We have had up to four roosters and fifteen hens. We have downsized since moving to town but still have a few chickens.

A Change is as Good as a Holiday

Those of you who have been following The Diary of a Cackleberry Farmer will have noticed a few changes since the series began. It started out as a monthly publication, before I decided to change it to seasonal i.e. Spring, Summer, Autumn, Winer editions.

This chapter heralds another change that reflects life on the Cackleberry Farm as it continues to evolve (often in unexplained directions.)

2016 unfortunately saw the passing of many celebrities and famous people (too many to even try to list) as well as a number of personal friends and relations. At the end of the year my wife and I made a pact to start ticking more things off our bucket list.

Well the opportunity to make at least these two a reality came just before Christmas when we sold our 40 acre block/property (the original Cackleberry Farm.) The first thing we did when the sale was finalised was pay off our existing car loan, and reply to an advertisement on a local 'Buy, Swap, and Sell' forum on Facebook. It listed "1996 Toyota Coaster Bus/Motorhome For Sale."

It was located close by and at a price we could afford so, cutting a long story short, we bought it.

At about the same time we also found a house that we liked in a quaint nearby town called Tingoora. We made an offer that was accepted, signed a contract etc. but due to circumstances beyond our control the solicitor advised us to pull out of the deal. We have continued looking and may have found another house but I'm not counting my chickens until they hatch (a Cackleberry pun, sorry.)

Have Bus Will Travel

* The title of this capsule may sound a little strange, but those old enough may recognise that it is a play on words from an old TV western series called Have Gun Will Travel.

Meanwhile, instead of sitting around moping, getting hopes up only to have them dashed, and even just going through life as usual, we decide to use our time constructively and hit the road in our bus (we haven't agreed on a name yet but I kinda like "Busby" so I'll call her that until my wife Kathy tells me otherwise.)

She isn't perfect and has a lot of miles on the clock, but her bodywork and interior are in good condition. There is a new 12 volt 60lt refrigerator, electric oven and cook top, excellent stereo and air conditioning throughout, CB radio, and awning. We have already made a few renovations such as removing two single bunks and replacing them with one queen size bed. She had seven seats but we have removed three to make more room for other proposed features like extra cupboards which we will install over time.

Willie Nelson - On the Road Again

Busby's very first test (apart from when we picked her up and brought her home) was a drive to visit friends living in Murgon approximately one hour away. They also own a bus (and a dog) so we were hoping to gain some tips in regard to renovations, dog-friendly places to visit and camp in our bus.

Murgon is situated on the Bunya Highway 270 kilometres (170 miles) north-west of the state capital, Brisbane.

It is one of the most attractive towns in southern Queensland. It was settled from 1843, but the town did not really develop until after 1904, when the railway arrived and the large cattle stations of the area were divided up. The town's name probably the Aboriginal name for a lily pond, found on Barambah Station, which was the site of the first pastoral property in the area.

Murgon was known as 'the beef capital of the Burnett', however, it's beef abattoir and the town's greatest employer of labour is now closed. Apart from beef and cattle production attractions of Murgon include winemaking, fishing on the nearby Bjelke-Petersen Dam and gem fossicking. Industries include peanuts, dairy farming, and wine. The famous Indigenous Australian settlement of Cherbourg is just south of Murgon.

Murgon is also home to the Queensland Dairy Museum. It has static and interactive displays illustrating the history of the dairy industry, with particular emphasis in the development of butter. 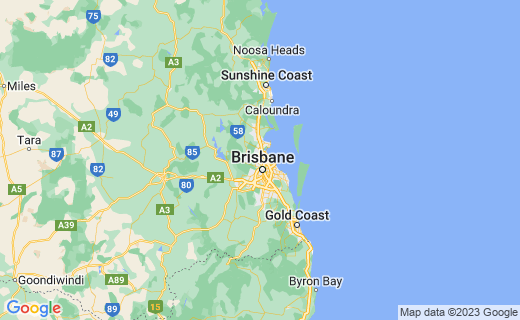 On the Road (A True Test)

Our first long trip in Busby was to our state capital, Brisbane. Kathy had to drive the car so we could leave it there for my son to use to come visit us for Christmas. He and his family were flying in from Darwin in the Northern Territory the next day, and then would need to drive almost four hours from the airport to the Cackleberry Farm.

This proved to be quite a test for Busby, but more so for me as I was new to driving a bus, hadn't used manual gears in years, and had to negotiate big city traffic to boot. But, I am here to tell the tale so bus, driver, and wife all returned home frazzled but intact.

Brisbane is the capital of Queensland, and the third most populous city in Australia after Sydney and Melbourne (pronounced ~ Melbon) . Brisbane's metropolitan area has a population of 2.3 million. In land area alone Brisbane is one of the world's largest cities.

Named after the Brisbane River on which it is located – which in turn was named after Scotsman Sir Thomas Brisbane, the Governor of New South Wales from 1821 to 1825. It is fondly called Brissie or BrisVegas by the locals.

Brisbane is well known for its distinct Queenslander architecture which forms much of the city's heritage. The city is a popular tourist destination, serving as a gateway to the Gold Coast and the Sunshine Coast, popular resort areas immediately south and north of Brisbane, respectively.

Several large cultural, international and sporting events have been held in Brisbane, including the 1982 Commonwealth Games, World Expo '88, the final Goodwill Games in 2001, and the 2014 G-20 summit.

One disadvantage in being situated on a river, Brisbane is also noted for having suffered damaging flood events, most notably in 1974 and 2011. My wife and I were actually visiting our eldest son during the 2011 flood and became stranded there for a week, unable to get home to the Cackleberry Farm to feed our animals. Luckily we had friends who were able to care for them.

Our son, Trent and his family arrived at the Cackleberry Farm on Christmas Eve 2016 and stayed for two weeks. Although there is plenty to do here on the farm, we wanted to show them a good time so planned a day trip to Lake Boondooma.

On New Year's Eve, we set out on the 74-kilometre journey of winding road that weaved its way through rolling hills. The day was a scorcher and by 10 am, the thermometer had reached 39 degrees Celsius (102.2 F).

We packed the bus with food and drinks and then four adults, two children, and three dogs set off for our day trip and fun at the lake. Busby's air conditioner is great and we had that on full as we drove.

On arrival, we found that many others had the same idea about spending New Year's Eve at Lake Boondooma, but we managed to find a park next to a tree in the day visitors parking area. Unrolling Busby's awning we set up tables and chairs in the shade and enjoyed something to drink and eat before going for a welcome cool-down in the water. The children had a great time and even the dogs enjoyed it. We are determined to take our dogs with us in the bus whenever we can and Lake Boondooma is one place that welcomes them. One family even turned up with a piglet and goat.

We wanted to get home by dark so before we knew it the time had come to leave, vowing next time we would stay a whole weekend and take advantage of the fishing, jet-skiing, wakeboarding etc.

Lake Boondooma incorporating Boondooma Dam is a drawcard for anglers, campers, bird-watchers and water-sports enthusiasts. The dam was purpose-built in 1983 to provide a water supply to the Tarong Power Station. In recent years it has been developed into a major regional recreation area where the fishing is excellent and amenities second to none.

There are cabins, camping areas, kiosk, boat ramps and water-sport equipment such as jet skis, boats, wakeboards and fishing supplies.

On the trip home I let Trent drive the bus so I could relax in air-conditioned comfort and enjoy the scenery. Well, that was wishful thinking as he has more of a lead foot than me and really pushed the old girl to her limits. Maybe I'm just getting old and slowing down :) The boys were worn out and slept for almost the entire journey.

Anyway, we arrived home safely, but Busby wasn't happy. She was boiling her little radiator off. It seems te cause was a combination of the scorching day and the fact we had her air-con on high for the entire trip there and back. She has been fine on all trips we have done since.

Kathy and I have a weekend planned back at Lake Boondooma for Valentine's Day. Hopefully the weather will be a little cooler by then and it should be good.

Thank you for reading this Cackleberry adventure, and I hope there is more to come. By the time I write another we will probably have moved, but we will be taking our hens with us so even if we are living in town the Cackleberry Farm will carry on..maybe as the Cackleberry Urban Farm, however.