After a restless night we loaded our car up and headed out after a free breakfast at the motel. Biscuits and gravy, waffles, eggs, milk and orange juice, this was by far the best attribute about this particular motel.

We headed south into the Ouchita Mountains of central Arkansas. The original plan was to travel along the Talimena National Scenic Byway but I decided to cut off some time and just head straight to our next destination, the Crater of Diamonds State Park in Murfreesboro, Arkansas. Caleb had been talking about this for some time and was excited about digging for treasure here. He was hoping to find a diamond while we visited. After that, we were going to head on down to Little Rock for a day or two.

We left Ft Smith on Hwy 71 to Mansfield before traveling to Waldron then picturesque Mena, Arkansas. Mena is situated at the eastern end of the Talimena Scenic Byway and is surrounded by mountains; maybe not the same type of mountains as Colorado or Montana but mountains nonetheless. Some of these peaks reach close to 2,700 feet and something stretching a half a mile high is no slouch when it comes to being a mountain.

The Ouchita Mountains and Crater of Diamonds

We hit the road early and found ourselves in the Ouchita Mountains shortly thereafter. Our daughter Bailey complained that these weren't real mountains but soon changed her mind after seeing the majestic, rolling mountains we traveled through. At one point, our Chevrolet Trailblazer found itself lugging down a bit and I explained to the rest of the crew that, although it may not look like it we were actually driving uphill on a pretty good grade. Bailey soon compreheded this and took her water bottle out and set it on the console. The water had shifted enough to plainly show the grade we were traveling up. Smart girl!

We took our time and snapped a few pictures here and there, taking in the breathtaking scenery which abounds in The Natural State. Water flowed alongside the road and beneath bridges we passed over, running clear and swift. I had never been to this portion of the state but had explored the Boston Mountains north of here some years ago. This was similar, but even more beautiful. Tall pine trees were everywhere, some reaching close to a hundred feet in height.

We finally arrived in Murfreesboro, Arkansas home to the Crater of Diamonds State Park. This is the only daimond mine in the world open to the general public where one can pay a small fee and dig for diamonds. What you find you keep so our hopes were high!

After paying our fee we headed downstairs to rent a small shovel. I had made three sifters a few days before to place dirt into and shake in hopes of finding a diamond or two. The park plows the 37 acre field every few weeks but it had been two weeks since it had been plowed the day we arrived. This meant the dirt had packed down and would not lend itself to easy sifting. So, we took our rented shovel, our trowels from home and began to dig in the dirt. The temperature was slated to hit the low 90's but a vigorous breeze took the edge off the heat and cooled us somewhat. As we were excited to hit the dirt we neglected to watch the explanatory videos detailing what to look for and how to proceed. We just began digging. It didn't take long to figure out these were essential to doing this the right way and I headed back up to learn more.

It turns out that on the Friday before there had been four diamonds found with one being almost a carat and a half. Most diamonds here are yellowish in color but some tend towards a brown color. They are rounded and appear to be glass-like so are easy to distinguish from other less valuable items which are common here.

We dug for some time here, picking a spot and digging deeply but to no avail. Bailey cut her finger on a nice speciman of Calcite but that would be the highlight of the day. We finally decided to call it a day and filled our five gallon bucket with virgin dirt to be gone through at a later time. We lugged our supplies back to the car, turned in our little shovel and hit the gift shop. Caleb bought a large glass diamond for his keepsake and we headed south once more. 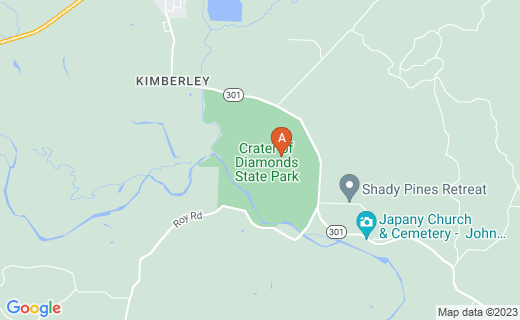 On To Little Rock

We headed south to pick up I-30 at Hope, Arkansas then on to Little Rock. In case you don't know, Hope is Former President Bill Clinton's home town. Way back in 1981, as a former governor of Arkansas Clinton was on the trail to regain his governorship when he stopped in Flippin, Arkansas to provide the graduation address for my sister's high school graduation. He spoke for the class of about 25 students, then stayed on shaking hands with all comers and having his picture taken with anyone who asked. For years that picture was hidden away in a closet until he became President; then it was suddenly something to be proud of and found its way to a wall in my parent's home. I don't know where it went from there; my sister moved to the east coast and may have taken it with her.

I-30 from Hope to Little Rock is nothing special to speak of, so I won't speak of it here.

We exited I-30 at Exit 133 and found our motel shortly after that. It wasn't the best side of town, I will tell you that. But it had our room, several places to eat and was near enough to the sites we were going to visit the next day.

Now, about our room. The room we had the previous night was adequate at best; this one fell somewhere below that. There was barely enough room to walk between the foot of the beds and the dresser against the wall. I mean, it was small! Two queen beds filled the floor space to a point where there was nothing left for anything else, but there was a chair and ottoman, an armoire, a dresser with a tv and a small coffee table-like something we could set our bags on. The bathroom was something to behold. I could stand in the center of the bathroom, stretch out my arms and touch every wall in there; and it held a bathtub, counter, expresso machine, toilet and three sided mirror. Our room was next to the rear entrance, adjacent to the elevator and the window faced the highway. It was loud, dirty, busy and generally not worth the money spent on it, yet it was another motel which was rated in the high 70's on satisfaction and the price would have been in the $80 range had we not received a better price on Tina's Choice Hotel's card. But still, it was a part of our learning that things are not what they seem, and it takes more money to find a truly decent room than what we spent on this trip.

I found an app for my iphone which turned out to be quite useful. Roadtrippers (also available online) allows you to plot a trip from beginning to end, then add specific locations along your path which you might enjoy. By using this app you can explore various location from the comfort of your home or car, deciding what you might like to see before heading out. You can pick and choose which ones interest you then click on them and read about what each site has to offer. You can even visit the website associated with the points of interest with this app. Food, lodging, and places of interest are all shown on Roadtrippers so take a gander at it before you head out on your next adventure.