Llama Treks in the Smokies

On our local news a while back, there was a story about a tourist attraction here in the Pigeon Forge, Tennessee, area that I knew nothing about - Smoky Mountain Llama Treks. I became intrigued and looked it up. As with many local attractions, they had a special offer for Sevier County residents. My husband and I decided (actually, I decided) that this would be a fun outing for our wedding anniversary.

Before embarking on this new and exciting adventure I gathered a little background information, as I really knew nothing about llamas. It turns out that William Randolph Hearst first brought llamas to the United States from their native South America in the 1920s as additions to his zoo. Alpacas were introduced here much later, in the 1980s. The two animals are cousins. They are smart, gentle, patient and easy to train. Llamas and alpacas are primarily raised as pack animals and for their fiber. They are not meant to be ridden and can live for 20-25 years.

We met Sandy Sgrillo with Smoky Mountain Llama Treks in a beautiful area about 30 minutes from our house. There was one couple from Mississippi and two other local ladies who joined us on our llama adventure. Each person led a llama (in my case, an alpaca) on a scenic trail. Several of the llamas were retired LeConte llamas. LeConte llamas bring supplies up and down Mount LeConte for the lodge visitors and staff.

There were llamas Afrika, Abu, Woody, Cinnamon and Blackfoot (the adorable 7-month-old baby), and Peanut the 13-year-old alpaca who was my companion for the two hour hike. Copper the dog ensured that we all stayed in line.

Sandy assured us that the llamas wouldn't kick or bite. We learned that overhandling the llamas as babies encourages them to kick and bite so these guys were trained correctly when they were young. They enjoyed nibbling on leaves and grass on our journey. Sandy had cautioned us not to let them eat leaves of the rhododendron, mountain laurel or dog hobble as this would be poisonous to their systems. She showed us pictures of the plants and pointed them out on the way. It was really informative.

We hiked along a creek for awhile and had a brief stop for the animals to drink. The last part of the trek involved hiking up a steep mountain gravel road. I realized just how out of shape I am! We tied off our animals on a wire stretched between two trees for that purpose and walked through water drain-off up another hill to Lost Mine Falls. The small, man-made falls cascade over a former iron mine. A suspension bridge hung above it and we crossed over (very wobbly!) to go down the other side. After another brief rest and a special alfalfa nibble for the llamas and alpaca, we ventured back to our starting point. We got a lot of laughs from the "whine" Woody and Blackfoot made on the journey. It sounded as if they were complaining but Sandy said they were just "talking."

Hiking back was much easier than hiking up. It was a great trip - lots of fun, information and interesting conversation between people who had never met before. A llama trek is definitely a "must" for that person who is looking for something different to do in the Smoky Mountains.

Just a note: Sandy sold her llama business so that she could pursue other interests but assures us that the new owners are awesome! 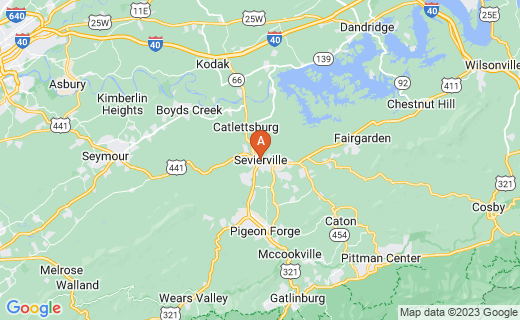