Out and About in Cape Town

Bronwen has lived in, taught in, and visited a number of countries and loves to share these travel experiences with others.

There is quite an amount for the tourist to see right in Cape Town itself. On our first day we visited the Company's Gardens, which were long and quite extensive and the Castle Fort, where we stood and watched the soldiers drilling and marching. It would have been a warm job for them in the sunshine and difficult in the strong wind that seemed to blow constantly. At the end of the road and at several places Table Mountain towered above the scene, whetting our appetite to know more about this majestic backdrop to the city. However, the white cloud 'Tablecloth' was spread over the top, so it would not be a good day for exploring in that area.

When we did go, it was delightful and I have written separately about that and will link it to this article. We travelled up on the Table Mountain Aerial Cableway and walked on the heath and rocks on the flattish top. Among other creatures we saw hyrax, known locally as Dassie, native flowers, red-winged starlings and laughing doves. The views were magnificent.

Later we drove to the open-air market. This was interesting and buzzing with activity. After making some purchases of clothing that we had forgotten to pack, we strolled in some more lovely gardens. We saw a family of guinea-fowl chatting and scratching among the flower-beds and also glimpsed a couple of bushy-tailed mongooses chasing each other among the shrubs. There were numerous beautiful birds, but at this stage they were all new to us and we could not name most of them. This was not going to be the kind of holiday where one curls up with a book as there was so much more to see in the time available.

Cape Town University is an interesting place to visit with some lovely old buildings. Our host took us to see several corners including a centre where research was being carried out to learn more about the unique creatures in the Cape Town area.

When we walked to the local shopping centre we noticed high on the hill beside us there was a strong fence and we could see wild animals walking and grazing safely behind it - safe for us and safe for them from the busy traffic. Later we discussed what we and seen and between us the creatures observed included a number of zebras with their neat stripes, wildebeests, guinea-fowl, ostriches and even a herd of eland.

A few days after our arrival, we noticed a smell of smoke in the air when we woke. Later, when out walking we found that a fire was blazing the other side of the fence. The heathland vegetation, known as fynbos, was tinder dry and burned easily and soon large trees were alight, too. Russian helicopters were used to bring it under control, but they were hampered by the strong winds. We were sorry for the animals and hoped that they had moved to safer ground. Some days later the winds dropped and the fire was at last under control.

The Dutch influence was especially visible in the architectural style of many of the buildings. Although the climate and some of the flora and fauna reminded us strongly of Victoria, Australia, the Dutch influence gave Cape Town an atmosphere all its own. Many of the houses had bars on the windows and we wondered if these were purely for decoration or were needed for protection. Everywhere the gardens and houses were clean and neat. Further out from the city some of the picturesque Dutch style houses were quite large and some had beautifully thatched roofs.

As it was summer, like our life-style in Australia, there were many open air activities. We had already visited the open-air market and watched a Fun Run. After attending church in the morning, we spent Sunday afternoon at "The Wharf" and had a very pleasant sail in a boat around the harbour. It gave a lovely view of the ships, large and small, that were tied up there, some industrial sites and glimpses of the city with Table Mountain hovering protectively behind. Our host gave us some dried Kudu to nibble as we relaxed and enjoyed the changing views.

We had taken a picnic tea and by five-thirty we were seated on the grass among a large crowd of people enjoying the Botanical Gardens. There was a free jazz concert presented by some of the local groups. It was an ideal place for the concert; we were surrounded by many different kinds of protea and were also entertained by the antics of guinea-fowl families that wandered around. The following Sunday we returned for an African Music Concert and that was most interesting and enjoyable, too.

There were sporting activities to attend, which surprisingly included a game of Aussie Rules Football. We also enjoyed a walk in Newlands Forest. 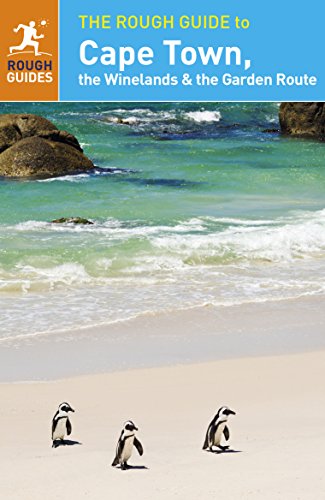 Out from Cape Town

There were many interesting place to visit that were outside Cape Town and perfect for half-day or full day excursions. Such places included Cape Point on the famous Cape of Good Hope, Agulus, and "The Needle," situated on the southernmost tip of South Africa. We enjoyed clambering over rocks as we watched waves crashing further out in a sea that never seemed to stand still.

Other places we visited included the Kirstenbosch Sunday Market. In Stellenbosch we saw through interesting Museum houses. Outside there were turkeys and poults, bantams and chicks and ducks on a pond. Franshoek and the Huguenot Museum and Memorial were interesting, too.

Worcester was a special village. Here we first watched a film of olden times and then enjoyed walking around the village to see people demonstrating the ways things were done in times past. We finished the visit by feeding the hens, bantams, chicks and ducks.

One day we were taken for a longer drive to Velddrif, north of Berg River, especially to see flamingoes. It was very hot and, disappointingly, when we arrived there were no flamingoes. However, on the drive we did see ostriches and springbok and later even a solitary, stately secretary-bird.

One of the highlights was a visit to Boulders Beach. Huge boulders behind the beach shelter it from the almost ever-present winds. Here we saw Jackass Penguins. They were so called because their call is like a donkey braying, but they have been renamed African penguin as Southern Africa is the only place in the world where they are found. They are bigger than our Fairy Penguins and I believe they are quite good at biting if disturbed. They mate for life and until a few years ago they were almost on the edge of becoming extinct as their habitat where they nested and their eggs were taken, but now they are doing well.

We enjoyed a Devonshire morning-tea at the Farm Shop and as well as trying the dried kudu, which is a large antelope, we also snacked on dried emu. A lovely barbecue provided us with a seafood feast, including snoek, an oily fish with lots of bones, popular in South Africa, and kingklip, a marine eel-like fish found in South African waters. Another dish popular locally was Moroccan Chicken and Almonds, which we enjoyed. In Simonville Cheese Shop we sampled and purchased several different kinds of cheeses. The Victoria and Albert Waterfront "Mussel-breakers" had great seafood.

One of the last places we visited was frequented by baboons. It was interesting, but one needed to be careful as some people on the path ahead of us were attacked. I loved seeing the little ones riding on their mothers' backs.

Places to Visit Around the World