Entering Ciudad del Este we heard what sounded like gunfire coming from a seedy neighborhood to the right of the cab. I looked at Ed and then to Luis who said in Spanish, 'Estes calles son muy peligroso (these streets are very dangerous)'. What brought Ed and me to this South American outpost on the Paraguay/Brazilian frontier? I met Ed some weeks before at our hotel in Asuncion, Paraguay. I decided to tag along on one of Ed's trips as he scouted sites for new cell tower placements in rural South America.

We had contracted a cab driver in Asuncion, the bustling river capital of Paraguay, meeting him through our hotel bartender. The next morning Luis arrived as the city was starting to wake - we boarded his rusting cab and proceeded to hustle through the city before the day's street traffic began to build - making our way towards the east/west highway leading to Ciudad del Este. This route would take us from one side of Paraguay to the other - from the border with Argentina to Brazil.

We made a quick stop for some cafe con leche, the strong Paraguayan coffee Ed and I had come to rely upon, rounded the last of the orange tile rooftops of the city proper and proceeded into the working class suburb of Fernando de la Mora. We passed a long line of street front businesses which included a large contingent of chicken rotisseries. These open air establishments, with rotating ovens, cooked hundreds of birds each - all roasting for Asuncions' many markets and restaurants. The smell was making my mouth water - but it was early and we couldn't afford the stop if we were to make Brazil by noon.

A few miles outside the city we encountered one of the three military roadblocks manned by what looked like teenage soldiers. Luis stopped the car and showed them his papers. The soldier took one look at Ed and me, with our anything but Latino looks, and asked for our papers. Luis was speaking with him in Guarani (the Indian language of Paraguay) for a few minutes after which we were unceremoniously waved on. Luis said in Spanish, which I will translate here, 'he was very curious to see gringos in this part of Paraguay and wanted to know where we were going.'

The next town on route was the city of Caacupe (cah-ah-coo-peh) - most renowned for its huge Catholic cathedral - one of the largest in South America. It is dedicated to the 'Blue Virgin' of Paraguay. Legend has it, a young Guarani Indian named Jose was being chased through the forest by a band of ferocious Mbayae Indians. Jose scrambled up a tree and prayed to the Virgin of the Franciscans, promising if she saved him, he would carve an image from the base of this very same tree. Jose sat quivering in the tree as the Mbayae walked beneath, never looking up to where Jose was perched. Jose kept his promise and carved an image of the Virgin.

Many years passed, and the Guarani offered the image of the virgin to the people of Caacupe. The villagers swaddled the image and placed it upon a mule for the journey home. Upon entering the valley of Caacupe – beautifully green and fertile – the mule stopped short, resisting all attempts to move her. A villager remarked that this was perhaps the spot where the virgin wished to remain. And so it was that the church was built, and the village of Caacupe continued to build around it. Many pilgrims came to see the Blue Virgin and pray to her, claiming that their prayers were always answered.

With the buildup to the Chaco War with Bolivia in 1935 -the church sold gifts to help Paraguay in the effort to fund the conflict. The war grew worse, and the villagers came to pray to the Blue Virgin only to find her gone! They looked everywhere but she could not be found, curiously, at that same moment, the Paraguayans began winning the war. It has been said that the Blue Virgin was seen bravely fighting alongside the Paraguayan soldiers, giving them spirit to fight harder. The war was won, and soon after the final battle, the Blue Virgin reappeared in the church at Caacupe. Her clothing was torn from battle, and a jungle snake had twisted itself around her ankle.

Paraguay won this war against Bolivia for a desolate area still known as the Chaco, effectively doubling the size of the country. It is a fascinating story that captures the spirituality of the people of Paraguay and of how Guarani folklore continues to hold her people in her thrall long after the Jesuit led the conversion to Christianity. Ed remarked after our passing of Caacupe, 'I hope the Blue Virgin watches over us during this trip.'

On to Ciudad del Este

It was a beautiful day, what could go wrong? Well, with that thought, the cab stopped in its' tracks. I looked at Ed and said, 'Where's your Virgin now?' A broken fan belt met Luis as he popped the hood. Another cab stopped behind us to help. I said to Ed, 'pose beside the car I want to get a picture - this may be the last evidence they find of us!' He laughed nervously but as soon as we finished the cab was fixed. Seems Luis keeps a supply of fan belts in the trunk.

We continued across the vast pampas complete with grazing cattle, small towns and roadside chapels the size of dog houses. Luis said these are monuments to the 'muertes' or travelers who lost their lives along this stretch of road, much traffic and little law enforcement. Among the undulating hills are oasis of palm trees surrounded by large ranches growing wheat. The road is busy with logging trucks packed with wood from the Brazilian frontier. Impatient drivers passed the cab on a highway devoid of speed limits.

With our arrival in Ciudad del Este we left Ed to meet his partner in town. Luis and I chose to explore the area. Ciudad del Este was formally called Puerto de General Strossner, after Paraguay's former dictator, who effectively closed the country to all outside contact for a half century until his death in 2006.

Now the city, second largest in Paraguay, is a wild west outpost connected to Iguazu, Brazil by a small span over the Parana River known as the Freedom Bridge. Luis and I crossed to Brazil without issue - border checks or military were non-existent. The bridge was packed with people on foot coming back to Paraguay with agricultural goods or going to Brazil with large boxes of electronics. Upwards of 30,000 people a day cross this bridge. According to Luis, 'Paraguay does not tax sales to Brazilians.' Also Luis said this area is rife with gun and drug smuggling - hence the gunshots we heard earlier. 'As long as we stay in well traveled areas of the city we will be OK'.

While in Iguazu we looked to have lunch. Iguazu had the look of being more prosperous and well kept than C. del Este. We stopped at one of the Churrascerias that lined to main road. I had the local fish called Surubi as a cordon bleu - mild and amazing - Luis had a roasted meat which came off a large skewer (the Lebanese influence in this part of Brazil). We washed it down with a Pacena beer from Bolivia - a delicious lager I cannot find stateside!

Luis and I then proceeded to see Iguazu falls located west of C. del Este and on the Rio Iguazu. Luis told me, " 'Iguazu' is Guarani from the word 'y' meaning water and 'uasu' meaning big. The falls had actually belonged to Paraguay long ago". We drove down a deserted road, through a cloud of blue butterflies and around a corner to view a series of cataracts stretching to the horizon. The falls weren't tall but they were everywhere. I asked Luis how much time we had until we needed to pick up Ed, he said, 'viente minutos' (twenty minutes). Wow - OK - I need to go down this trail to see the falls up close. It was wet with spray from one of the huge thunderous waterfalls. Along the trail I passed a few Coati Mundi's - these cat sized, ring tailed, long snouted members of the raccoon family show no fear of humans and, thankfully, ignored my presence. I stood in awe, taking pictures, of the millions of gallons of water cascading off a cliff - coming to within a few feet. You have to love a country that is unencumbered by American style lawsuits which would have fenced this area off. Didn't have any more time - I hustled back to a sleeping Luis. I woke him, we got back to C. del Este without incident and picked up Ed.

Ed and I caught up with our stories on the way back to Asuncion after which we arrived at our hotel, dirty and tired. 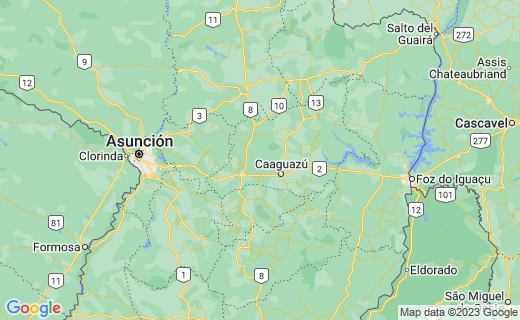