Paris Catacombs: A Visit to the Empire of the Dead

“Don’t get lost. A few years ago, somebody wandered off, got lost in the tunnels and died.”

Outside Métro Denfert-Rochereau, a dozen of us wondered if our tour guide, Alberto, was joking.

We were about to the cut the hour-long line that wrapped around the Catacombs entrance in order to descend from the City of Lights to the City of the Dead. Alberto admitted that the recent stories he’d heard were probably urban legends, but it did happen to one Philibert Aspairt in 1793.

As we made the dizzying walk down the long winding staircase 20 metres underground—past the electrical and communication systems, the sewers, the Metro, the RER (trains reaching the Parisian suburbs), and into the small portion of the tunnels open to the public—Alberto reassured us that we would be safe.

There were 300 km of tunnels throughout Paris as a result of the quarry work for limestone, most devoid of light, humanity, and, most importantly, cell phone reception, but all we had to fear was a slippery step, dripping water, and a bit of bone dust.

Still, we stayed close to each other in the narrow corridors leading to the Ossuary, where the skeletons of six million Parisians awaited us.

By the end of the 18th century, ten centuries worth of mass burials at the Innocents Cemetery were starting to reap consequences upon the citizens. A typical funeral meant a corpse, placed in one of the four coffins available at the cemetery, would be blessed, and then dropped through a trap door onto a pile of other corpses. The air and water became polluted, the fruits at the open markets rotted, and white pus climbed the walls of the neighbourhood. Prefect of Police Lenoir had the idea to use some of the abandoned quarries to sweep the messy human remains even deeper underground. This was the first crack in what hatched to become what is now known as The Catacombs of Paris.

The walk was longer than we anticipated and Alberto kept us entertained with facts about the catacombs: stories involving Nazis, the Man in the Iron Mask, The French Revolution, and guillotine victim.

We passed an impressive stone sculpture of a miniature jailhouse that Decure, a quarryman, had spent five years (1777-1782) making from memory. Captured by the English, he had been a prisoner of war on the island of Minorca. Decure died while digging a secret staircase near his masterpiece in order to sneak in patrons. The staircase was never finished.

Working in a quarry was otherwise pretty dull. When the femurs and the tibias came in from the bloated cemeteries, the other quarrymen had the chance to exhibit their artistic flair.

After entering the entrance vestibule of the Ossuary, above which the engraved verse “Halt! This here is the empire of death” greeted us, we witnessed first-hand the narrow walls of skulls and bones in orderly stacks, and the surprise of skulls arranged in the shapes of hearts and crosses.

We stared into empty eye sockets, trying to obey the signs instructing us to refrain from touching. Curiously, a few of the heads managed to retain a tooth or two. The air was as chill at the atmosphere, but we were all smiles, posing with our new friends and hoping that they would appear in photos taken without flash.

And in more macabre rooms we wandered. Soon the initial shock of standing in an open crypt subsided, and we began to feel at ease in the presence of the dead. Some of us began to feel more daring. We asked about the Cataphiles, the network of fervent underground explorers who enter through forbidden entrances throughout Paris.

“They eat, smoke, drink, dance,” Alberto said. “Basically the same things you would do above ground on a weekend.”

He had explored the illegal section once with a friend, but cautioned that it was crucial to go with someone experienced and trustworthy. Many Cataphiles knew each other like family, but who knows who—or what—you might find down there. Perhaps a couple of senior citizens eating a romantic candlelit dinner on a morbid date night; jaded veteran Cataphiles with open hostility for tourists; maybe even Cataphile Nicolas Claux, the Vampire of Paris, convicted killer and former cannibal. Sometimes the tunnels were as low as three feet, and water could rise to waist-level. This, and the possibility of death, made Cataphilia sound less appealing. Even the tunnels open to the public, with its electrical lighting and security guards, was no place for those with heart conditions or the faint of heart.

After the 83 steps back up to ground level, we found ourselves on a deserted street far from the entrance. Confused, we turned to Alberto for directions to the nearest metro or a good place for lunch. Then we went our separate ways, reveling in daylight.

Paris Underground: The Maps, Stations, and Design of the Metro
Buy Now

2 kilometres covered by the tour

14°C is the constant temperature in the Catacombs

250,000 visitors to the Catacombs every year

Inside the Catacombs of Paris by Married2Travel 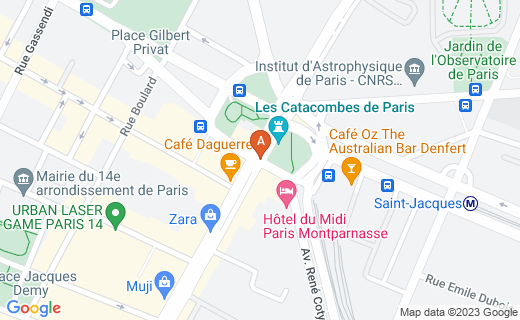 The Catacombs of Paris

Are you planning on going to the Catacombs on your next trip to Paris?