Another world to explore for frogs in the Canary Islands

Parque García Sanabria in Santa Cruz had been closed for maintenance as I found out some months back when I went there and found a huge fence all around and a sign explaining this. I had gone to this Canary Islands capital city on my continuing attempt to find frogs on Tenerife, because when I first came to the island my friend Priscilla had taken me to this park to show me the pool the amphibians lived in.

Photos from a Tenerife park

Have you been to Santa Cruz?

Only problem was we picked the wrong day and there were none to be found. So after two unsuccessful visits to Parque García Sanabria I was really glad to find out that it had recently reopened and once again I set out to see if I could discover any frogs or other wildlife in the park.

Parque Sanabria is well worth exploring anyway and for me it really is the best place in Santa Cruz. It has loads of tall palms as well as Dragon Trees, Tulip Trees and many other types, which provide shady areas as well as magnificent displays of flowers and foliage, like the bright flame-red and ferny leaves of the Poinciana that grows so much taller in the north of the island.

I spotted a Screw Pine with its unusual flowering cones and spiky leaves. This strange tree originally comes from Madagascar but appears to do well on Tenerife as well.

There is something for everyone in Parque García Sanabria with a rose garden, a cactus garden and a herb garden as well. I stopped off in the last of these to admire the clumps of sage, lavender, marjoram and basil and couldn't resist picking a few leaves to squash them in my hands and inhale the incredible spicy aroma.

As you wander around the park down its pathways or under its green tunnels of bamboo, every now and then you will spot strange sculptures. There is one like some sort of collection of white monoliths and another with figures that look decidedly Aztec or Incan in origin.

There is a selection of large stone blocks with hollow ones that you could climb through and I couldn't decide if this was intended as an adventure playground or a work of art. Perhaps it is both?

The sculptures add to the otherworldly feel to the park, which really doesn't feel as if it's in the heart of a bustling capital city. A magnificent fountain with a semi-naked statue of a goddess bathed in the spray adds to the fantasy effect of it all.

Now fountains are fine to look at but they aren't the sort of places to find frogs because they are too clean and sparkling. Frogs need some plant life and mud and somewhere to encourage insects that they can eat.

I wandered around trying to remember, which part of the park my friend had taken me to and then I spotted a mostly-drained pool with a little fountain in the middle and some wooden ducks standing forlornly on the side. Oh no, I thought they have turned the frog pond into this paddling pool for the children and I was beginning to think my journey had been in vain.

It was then that I spotted a whole series of lily-ponds ideal for frogs and I went to investigate. Straight away I saw a red dragonfly and the water teeming with small fish, which looked like Guppies, together with a few Red Platies, two species that all tropical fish keepers will know I am sure.

The water lilies were in flower and there were blooms in purple, white and a beautiful lemon yellow. I started thinking about how wonderful it would be to find a frog sat on a lily pad and to get that perfect traditional picture.

It was then that I spotted a tadpole and then another and another. Every now and then one would rise to the surface to gulp air, whilst others rested in the green algae or on the brown mud at the bottom.

Now where there are tadpoles there must be frogs and very soon I spotted some little froglets in the clumps of lilies or floating at the surface of the pool. They had a green stripe down the middle of their backs and I recognised them as the Iberian Water Frog, which I had already managed to find in Buzanada in the south of the island.

I had been hoping that the type that lived in Parque García Sanabria was the Mediterranean or Stripeless Treefrog, which is the other species that lives here but was happy all the same to have found what I was looking for. Being careful not to slip in and not to alarm a froglet I could see I moved my camera slowly into position to get a photo.

It had been another successful search for frogs in Tenerife but I'll have to wait for the spring to see the big ones and I still have to find a tree frog here. My quest continues. 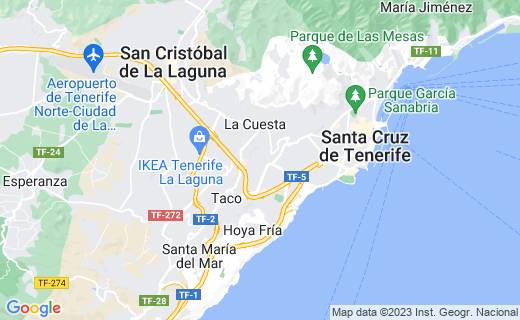