Places to Visit in Manchester

I have a soft spot for Europe. I love to travel and visit interesting places.

Is Manchester a nice place to visit? I think so!

Many people know this big city in England for its world-famous football clubs Manchester City & Manchester United. But this university city has more to offer. There is plenty to find in this lively city, especially in the fields of:

The range of hotels, B & B's, and excellent restaurants is extensive. Diversity is one of the main characteristics of its nightlife. A weekend break or city trip to Manchester will quickly give you a good idea of this lively English city full of museums, architecture and cozy pubs.

Are you wondering what to do when you are visiting Manchester? To give you some inspiration, here is a list of several places you might like to visit in Manchester.

The beating heart of Manchester is Albert Square, the largest square in the city. It is also the most beautiful and important square in Manchester. It is a popular place among residents and tourists alike because there is a lot to see and do. Large Victorian buildings surround it. It is a regular venue for events, food festivals, and concerts. The best event of the year? In December, Albert Square turns into a big, bustling Christmas market. At the Manchester Christmas Market, you can warm yourself with glühwein and shop under the Christmas tree.

The most impressive building on Albert Square is the Manchester Town Hall. You can also find some monuments and statues on the square, including the one for Prince Albert. The fountain was placed in honor of his wife, Queen Victoria. Albert Square was built between 1863 and 1867.

The Castlefield neighborhood is also known as the cradle of Manchester. It's now a protected area in Manchester. This place is actually the birthplace of the city. The name originates from castle-in-the-field. There used to be a Roman fort here called Mamucium. Now you can still see parts of it. There's even a reconstructed part on display. The area around it Castlefield was mainly an industrial area with a lot of trade. You'll now find the legacy of a bustling industrial city there.

Castlefield is a lively place with lots of industrial architecture, several nice bars, street art and the Museum of Science and Industry. You can see Roman remains, but also wander past old factory buildings and get a glimpse of Manchester's rich past.

Manchester's two most famous parks are Heaton Park and Peel Park. Heaton Park is the largest of the two and even ranks among one of the largest city parks in Europe. What especially attracts attention is the 18th-century country house 'Heaton Hall, ' which is now open to the public. They decorated the rooms in their original state. These decorations give you a glimpse into the life of the wealthy Egerton family who once lived there. The park also has an 18-hole golf course, playground, petting zoo, ornamental gardens, and an observatory. Peel Park has more sports fields and a playground for children aged between four and fourteen. The park is also home to the Salford Museum and Art Gallery.

If you're visiting Manchester with children, make sure you stop by the Legoland Discovery Centre. This is where Manchester's main attractions are recreated with Lego bricks, but there's so much more to do. This cheerful play paradise is insanely fun for children between the ages of 3 and 10, because everything here revolves around Lego. There are several attractions suitable for the whole family, and you can ,of course, build things yourself to your heart's content.

During a trip to Manchester, most likely, no one will pass this building without wondering what it is. It is situated in a beautiful location bordering the canalside. This piece of high-quality architecture was designed by Michael Wilford. The Lowry building, consisting mainly of glass and steel, houses two theatres, a studio, 2000 m² of exhibition space, and an art gallery.

In the magnificent building of the Manchester Art Gallery, an extraordinarily extensive collection of art is displayed in a very innovative and creative way. At least six centuries of British art can be admired, for example, but other European works are also on display. In addition to the permanent collection, special exhibitions are regularly organized. I can highly recommend a visit!

Museum of Science and Industry

There are several interesting museums in Manchester, but you should definitely visit the Museum of Science and Industry. (M.O.S.I.) In this science museum, you can walk around for hours and marvel at the many interactive exhibitions.

Because of its large and varied collection, they spread this museum out over several buildings. The museum is spacious and has regularly changing exhibitions on subjects related to technology and inventions. Especially the themes on transport take up a lot of space. For science, there are collections of, among other things, X-ray equipment and textile machines. At the M.O.S.I. you can also learn a lot about the industrial revolution and the textile industry in Manchester.

Manchester Cathedral is not very impressive in size and therefore does not stand out in the public eye. Still, it's a lovely place to take a look inside because as soon as you step over the doorstep, you'll be amazed by its beauty.

The stained-glass windows and gothic elements are breathtaking, and you have to put in some decent effort to have a good look at everything. If you like to learn more about the history of the church, you can join a guided tour by one of its volunteers. 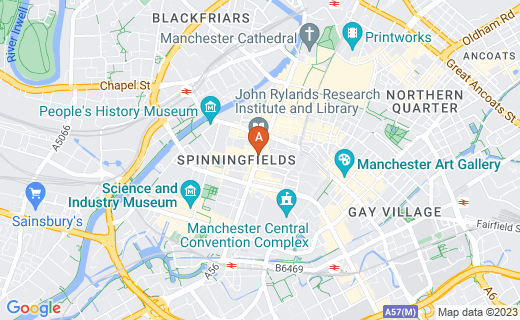 Deansgate Locks, Castlefield and the Beetham Tower lies at one end and the National Football Museum and Victoria Station at the other.

"Manchester’s got everything except a beach."

One of the most prominent landmarks in Manchester is the Town Hall. Several local government services are brought together in the town hall built in Victorian style. The building was designed by Alfred Waterhouse, who also designed the Manchester Museum and Manchester Assisen Courts.

This Victorian building can be found at Albert Square and is at least as beautiful on the inside as it is on the outside. The building of the Town Hall was completed in 1877. Very impressive murals, magnificent mosaic floors, vaulted ceilings, and large chandeliers adorn the inside of this beautiful old Town Hall.

Greater Manchester is the home of a huge indoor shopping center. It even belongs to one of the biggest in the United Kingdom. More than 10,000 parking spaces indicate how many visitors it attracts daily. The food court, with room for 1,600 guests, is particularly exceptional. Besides the many shops and food outlets, you will also find a cinema, Adventure Golf, a bowling alley, laser games, bumper cars, and a game center.

If you want to shop in the Manchester center itself, then you will undoubtedly like the indoor Arndale Centre. This shopping center is one of the largest malls in Europe and, therefore, the ideal retreat for a rainy day. Besides finding a lot of famous fashion brands, you'll also have the opportunity to go shopping all afternoon. Are you mainly looking for local designers and small boutiques? Then you'd better head for (the side streets of) Deansgate, Manchester's main shopping street.

South of the Manchester University campus lies the Whitworth art gallery, which you can find in a park bearing the same name. Thanks to a donation from Sir Joseph Whitworth, it was possible to open this museum. Joseph Whitworth was known as an engineer, philanthropist, inventor, and entrepreneur. Another part of his capital was donated to Christie Hospital and several philanthropic projects. The unique art collection includes sculptures, paintings, textiles, and the marble statue of Sir Jacob Epstein 'Genesis'.

Liverpool or Manchester. What's your favorite city to visit.

Things To Do In Manchester

These are only a handful of sights you might want to visit during your stay in Manchester. I stayed in Manchester for two weeks several years ago. And even then, I felt short of time. Mind you; I did most of the sightseeing on foot — a great way to get a feel for the atmosphere of a city.

My personal favorite is the Manchester Art Gallery. I spent many hours there. As a fan of Manchester City, I visited the Etihad stadium several times too. I also love the Waterstones bookstore at Deansgate. Whenever I visit Manchester, I'll pay it a visit (or two).
I do hope you visit and enjoy this city if you are in its neighborhood.

Are there any exciting sights you think I forgot to mention in this article? Please refer to them below in the comments section. Readers will be thankful for doing that.