Places to See in Shimla, India

Lovnish is a Development Sector professional who loves to pen down his thoughts. Traveling, Reading and Writing are his passions.

Shimla is known as the queen of hills. This small town in the state of Himachal Pradesh is also the capital of the state. People from across the world visit Shimla for its pristine beauty and serene climate.

At no time of the year will you come across tourists from different regions and cultures. Let us explore the places to see in Shimla so that next time you visit this hill town, you are left mesmerized with its pristine beauty.

Famous for its photography options and shopping locations, Ridge happens to be the most popular location in the town. Spectacular views of snowbound Himalayas make it a perfect place to visit.

Visitors can ideally head to the Christ Church or spend some quality time at the Tudor library which is known to have some old and rare books too. Enjoying the cozy sunshine during winters seems to be the ideal thing to do at ridge though. You will find a large number of tourists and locals doing so.

Ridge is famous for its restaurants and eateries.

There is no entry fee for the location.

You can visit at any time of the day.

3-4 hours would be ideal for the visit.

The famed Christ Church in Shimla is an elegant example of neo-gothic architecture and has been an important landmark and part of the history of this hill town in Northern India. Located on the ridge itself, the church was built in the year 1857.

It took over three years to build this marvelous structure. Its stained glass windows, clock tower and frescos amaze the people today also as it might have done centuries ago.

Stunning views of the town can be seen from this church and a large number of people gather here for the Sunday prayers.

The Christ Church is also popular among photography and history enthusiasts.

Ideally, you can spend half an hour admiring the beauty of the church.

Housed in the famous Viceregal Lodge and located over the observatory Hill, the Indian Institute of Advanced Studies used to be the residence of Viceroy of India during the British Era.

This majestic building was built between 1880 and 1888 by the British. Indian Institute of Advanced Studies was set up here in 1965 during the tenure of Dr. Radhakrishnan.

Selected regions of this building are open to the common public. Many important events related to the Indian freedom struggle and other vital matters were discussed in this building.

A large number of people can be seen here any day of the year.

To know about different historic events in recent Indian history.

Annadale ground is one of the prime attractions of this hill town. The ground is located at a distance of 2 Km from the city center. Ideally, you could walk down to the ground or take a cab or public transport to the place.

This was a historic playground for the British who used to play cricket and polo in this ground. The ground is currently with the Indian Army which uses it as a helipad and also for other logistic purposes.

A beautifully designed Army museum has also been constructed near the ground and you can see different relics associated with the Indian Army here.

Entry to the ground is sadly restricted as it is also used as an active helipad.

To spend some qualitative time with nature.

To know more about Indian Army

Any journey to Shimla is incomplete without a ride on the Kalka Shimla toy train. The track was built in 1903 by the British and the toy train has been operational on the track, ever since. The 96 km journey from Kalka in Not Indian plains begins from an altitude of 500 meters and goes up to 2100 meters at Shimla.

The train has also made it to UNESCO World Heritage Sites and the creativity with which the British designed this impeccable track has been admired down the ages and continues to do so.

Even if you are unable to make a full journey, a small journey of few Km is highly recommended on the route.

Shimla or Simla as it used to be known during the British era continues to amaze everyone who comes once to this hill town. If you are still waiting to visit this mesmerizing hill town, the time to do so is now! 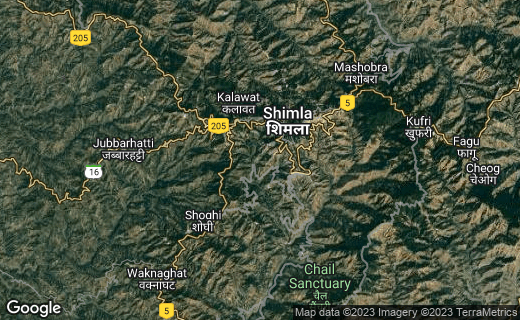