The Pleasure Garden of Kandyan Kings

Sri Lanka is divided into 15 floristic regions. Out of them, Kandy and Upper Mahaweli is one of the regions in the Central Hills of the country. Udawattakele, or the forbidden forest of the ancient kings is situated within this region. The uniqueness of Udawattakele is that it is man-made. The kings of the Kandyan Kingdom always protected Udawattakele and they made it to be a part of the Royal Palace premises. During the time of King Gajabahu (114 AD – 136 AD) of Anuradhapura Kingdom, the first human civilization in Kandy had started based on the cave called Senkanda Lena.

According to history, in 1371 AD, King Wickramabahu of Gampola used Udawattakele as a pleasure garden as well as a hideout from enemy during times of conflict. In the era of kings Udawattakele was a forbidden place for ordinary folk.

Up to 19th century this was a virgin forest. At that time Hanthana Kanda (The Castle Hill), Bahirawa Kanda (The Demon Hill), and Udawattakele had been one large forest stretching unto the edge of Kandy Lake covering more than 405 hectares. When the British seized the Kandyan Kingdom in 1815, they started clearing out those forests of Hantana, Bahirawakanda, and Udawattakele to build military fortifications and barracks and other commercial buildings of their interest.

Udawattakele was partially cleared to make space for military fortifications and barracks, To make space for the Governor's Residence and surroundings, to build roads, a school, residences, and coffee plantations. As such, the devastation of this virgin forest was started by the British. However, after 41 years the British colonial government understood the importance of preserving Udawattakele. So, just a few years before the end of 19th century, Udawattakele was made a Reserved Forest.

Udawattakele stands upon a group of metamorphic rocks called the Highland Series of Sri Lanka, belonging to Precambrian times. The soil of this area is a little developed Reddish Brown Latosol. 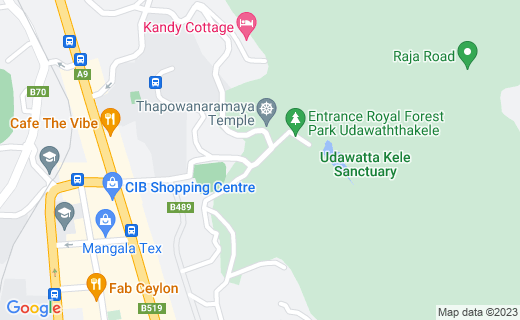 Kandy is 116 kilometers from Colombo via A1 highway. Supposing that you start at the Kandy Bus Stand (Goods Shed) or Railway Station, you can walk the 2.5 kilometer distance along the Power Station Road, Dalada Vidiya, Yatinuwara Vidiya, and Hill Street up to the Main Entrance of Udawattakele. There are other transportation options as well, like hiring a Three-Wheeler or a Taxi to reach the Main Entrance.

At the Main Entrance, a ticket is issued at a nominal price. The ticket allows you to stay in the forest from 7.00am to 5.00pm. If you need to enter the forest for research purposes, you are allowed to do so free of charge provided that you bears a letter obtained from the Divisional Forest Office, Kandy. Pay a visit to the Udawattakele Conservation Center established inside the Reserve to learn more about the place.

While inside the forest, visitors are not allowed to shout, play music, collect faunal or floral specimens, cinema or video filming, or do whatever harmful to the biological diversity and the peaceful atmosphere in Udawattakele.

Major Events in the History of Udawattakele

Today, Sri Lanka possesses about 3400 floral species out of which 25% is endemic. 65% of them have an Indian origin while the rest of it having Malaysian or Australian origin. 50% of all Sri Lankan floral species are found in Tropical Rain Forests. 70% of endemic flora is found in Central Hill zone, Peak Wilderness, Horton Planes, Knuckles, and Sinharaja.

402 floral species have been identified in Udawattakele. This figure includes 9 endemic species. Out of the 402 species, only 33 are found abundantly. An attractive feature in Udawattakele is the Pus Wela (Entada pusaetha), a giant endemic liana which is spreading all over the forest. The age of this giant vine is believed to be 200 to 300 years.

16 mammal species live in Udawattakele, 9 of them being endemic. Out of the 16 only 6 species are found abundantly.

Out of Sri Lanka's 149 lizard species 84 are endemic. There are 96 snake species including 34 endemic ones. Udawattakele hosts 13 lizard species, 7 snail species, 3 freshwater fish species, 2 frog species, and 156 insect species. Studies are being carried out to complete these lists.