I love beautiful scenery and the changes of the season offer us some scenes of beauty and I love to travel. Learn from travel experience.

If you want to see where some of the first pilgrims arrived in America, then visit Plymouth, Massachusetts.

It is the perfect place to visit. Beside the Mayflower II, there are numerous historical places to visit. The employees of the Mayflower II are in full pilgrim dress, and they talk as if it really is 1620. It is a delight to talk to them and learn of the many things you have only read about in the past.

We spent a day touring the town of Plymouth, and it was fascinating, but we did not nearly enough time. We were there in October, yet the temperature was 70, the Atlantic and the sky were a gorgeous blue as you can see from my picture of the Mayflower. It was a perfect day.

Plymouth is the largest municipality in MA by area with a population of almost 60,000. It is located about 40 miles from Boston and has survived with the major industries of rope making, fishing and shipping. There are numerous historical sites to visit and if you are a history buff, it is perfect.

The Mayflower II was the most fascinating place to me. I can't imagine how the Pilgrim colonist all managed to sleep, eat and stay healthy at all in such small quarters.

The first winter was very cold and they lived on lobster and little else. Half of the colonists died that first, hard winter. They didn't have proper housing or food. 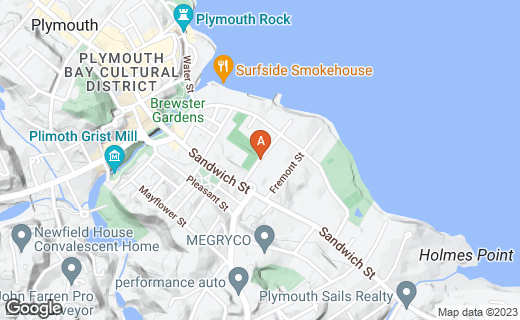 It is situated along the the Eel River wetlands, which overlooks Cape Cod Bay. You will find Wampanoag Homesite, the 17th Century English Village, and the Crafts Center, plus the Mayflower is just 3 miles down the road.

Alden House Museum - This is the only standing structure left where pilgrims were known to have lived. John Alden and Priscilla Mulling arrived in 1620, married in 1627, and moved to this house. This property has never been out of the Aldin family.

This cemetery is a must if you are walking along the Pilgrim's Path as it is the first fort, as well as, the burial place of William Bradford and other original pilgrims, which includes some of my ancestors, like John Howland and family.

My Mother at Burial Hill

1749 Courthouse and Museum: This courthouse is filled with many historical items from the history of Plymouth. This building has been used for many different offices as they built a new courthouse in 1820. It does house a fire engine from 1828.

First Parish Church in Plymouth: This is the oldest ministry in New England and they are open for tours during the good weather months.

1677 Harlow Old Fort House: This is a working museum and heritage craft center which represents life in the old Colonial Plymouth.

Hedge House Museum: This is a Federal-style home built in 1809 by a merchant shipowner and is now the headquarters of the Plymouth Antiquarian Society.

Parting Ways: Four young back men are buried in Plymouth who served in the American Revolution. Cato Howe was a freeman and had probably never been enslaved.

Jabez Howland House: This is the only house in Plymouth where Pilgrims actually lived. John Howland and his wife Elizabeth Tilley Howland lived here with their son for a period of time in the winters as they had a farm out in the country.

This is a fascinating house to tour as it is filled with original antiques. They had a special room on the second floor to isolate someone who was sick with a window to place food through to the sick individual. They also had a cradle with a long rope which was near the fireplace so the baby would be warm while the parents lied in bed covered by curtains and pulled the rope as necessary.

Plymouth Rock: It is located at the waterfront in downtown Plymouth. In 1774, they had a contentious issue in town about moving the rock with the impending Revolutionary War was afoot.

In their attempt to mount it on a carriage it split without anyone being injured. Since no one had observed a flaw in the rock the patriots of the day were a little superstitious and decided the separation of the rock happened as an ominous division with the British Empire.

Jenney Grist Mill: There is a huge grinding stone and they explain how the corn, which the Indians taught them to grow, was ground with stone turning by the power of water. This was one of the reasons the residents of Plymouth survived.

Richard Sparrow House Pottery and a Museum: They make beautiful stoneware and porcelain pottery on the site today, They have a nice selection of jewelry as well.

The Trask Museum: The 1725 Captain Taylor House and the 1829 Trask Museum which have been featured in book and films are two homes that are considered to be the most actively haunted in New England.

National Monument to the Forefathers: This is the largest granite monument in the U. S.standing on top a hill facing east to the harbor to welcome those who come by water.

There is a Visitor Information Center on Water Street across from Plymouth Harbor which should be your first stop as the staff is friendly and will help you find anything you are looking for in town.

They have brochures and maps available. There is also an art museum, the Plymouth Philharmonic Orchestra, and several other types of galleries in case you run out of history.

Obviously, from all the places I named and several I didn't, you can see that there is plenty to do in Plymouth, Massachusetts. It is a very interesting place to take a short vacation and enjoy all the sites and friendly people.

There are numerous little souvenir shops and a look of nice little restaurants to grab a meal. There are several nice hotels in the area as well, including the Plymouth Inn and the Lexington Hotel.