Is the Presidential Trail worth the walk at Mount Rushmore?

Should we take the Presidential Trail

When we arrived at Mount Rushmore, it was really exciting to be at a place so famous for those well known Presidents carved into the rock.

I found it interesting that the Presidents are not placed in Chronological order on the Monument either.

They put them up there from first to third, then the 26th and last was the 16th President.

From left to right this is who is up there on Mount Rushmore;

George Washington, besides being our very first president, was also known as the father of our Country. Who led the people in the American Revolutionary war as we won our freedom from Great Britain. He was leading us as we became a Country, there at the very birth of it. A well deserved place of honor for him.

Thomas Jefferson, actually wrote the Declaration of Independence, he was also responsible for doubling the size of the United States with the purchase of the Louisiana Territory from France. Wouldn't it be weird if France owned half of what we now know as the United States? Well done Mr. 3rd President!

Theodore Roosevelt, good old Teddy to some. He led an important part in the construction of the Panama Canal and a huge part in the economic growth of our Country. Did you know that he wasn't elected into his first term? He took over when President McKinley was assassinated. He was our 26th.

Last but now least, is my favorite: Abraham Lincoln. He led this country through the Civil war and helped to abolish slavery. I love this man! Pretty good for our 16th President.

So there I was taking all these photos above, but in the back of my mind as I was taking photos along the way was a thought.

The thought was, how many times have I seen this exact same photo of this monument as you see of the ones above. So I began my quest for a different and unique view of the monument from an angle you just don't see very often.

We decided to try the Presidential Trail.

Now the Presidential Trail is about a half mile long, and is a very nice walk as you go clockwise about halfway around it. The last half goes down some stairs, to the Artist studio, which is really cool to go see. Then back up some pretty steep stairs to the Grand Terrace. If you have difficulty with stairs, I would suggest just going around the 1st half. But if you do you will miss out on the Artist Studio.

Washington through the Crack

A cool view through the crack of Washington

Above is a cool view from this little cave in the rocks as you walk along the trail, it parts with this crack that you can look up at Washington's carving on the rock. Worth that little side trip. 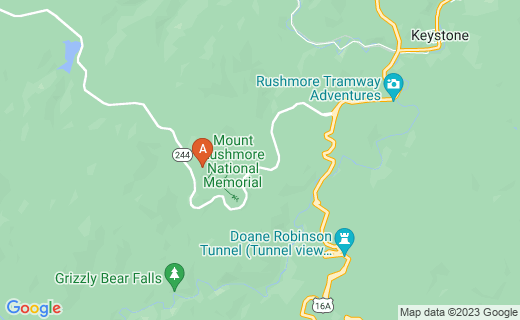 Where did Roosevelt and Jefferson go?

A disappearing trick along the trail

I found it interesting as we walked to the left side of the monument on the Presidential trail and suddenly it looked like only two Presidents were carved onto the rock.

It was like Roosevelt and Jefferson were just gone.

Do you think there is a reason why the artist Gutzon Borglum and the 400 other workers that helped him, carved the Presidents in that specific order.

Did he feel these two Presidents showing here led a more important role in the evolution of our Country?

A Peek at Lincoln

A glimpse of Mr President Lincoln

You will love being able to see different angles on the Presidential trail. Here you get a glimpse of Lincoln through the tree branches.

A tip for the traveler

Helpful hint: For those of you that are like me. My favorite thing to do is to snap photos of the information boards along the way and take the time to read them later when I am at home. They have a lot of interesting things on them, but for some reason my visual interest is in the beauty of where we are at the time, not on expanding my mind. But I really do like to learn about the places we visit.

How did they build Mount Rushmore

There were over 450,000 tons of rock removed to make this monument? I read on one of the signs that some of the workers were only making $8.00 a day working to build it. They would have someone come along to see how it was all coming along and they would want to buy a piece or the rock they were removing. They would talk up the importance of that rock until the person would offer $6.00 for a rock. Almost a whole days wages back then. Then they would sale them the rock.

The compressor house at Mount Rushmore

A close up view

A close up view

You can actually see the layers and marks on this photo of their carving work to the side of the faces. Look at the glasses, you really can't see them from afar. Did you know that each of their noses is twenty feet long? There faces are about the size of a six story building. Look at those pine trees up close to the top, they help you to understand from photos and even in person just how big they are. No wonder it took 14 years to build Mount Rushmore, it is huge!

So in conclusion, I hope you agree with me, that it is well worth the walk along the Presidential trail to get all these different perspectives of this great monument.

Have you been to Mount Rushmore, tell us what you thought of it.