UFOs were once reported at Punta del Hidalgo in Tenerife's north

Punta del Hidalgo is a village by the sea in the north of Tenerife in the Canary Islands and the end of the coastal road. Whilst the road may finish there and buses have to turn and go back, it is the starting point for a footpath that leads up over the cliffs and takes walkers to the hamlets of Chinamada and El Batán which are situated in the Anaga Mountain range.

This walk has made Punta del Hidalgo popular with ramblers and trekkers, who follow the signs and make their way up the path that leads up into the mountains. El Batán is some 9km from there.

A Tenerife UFO spotting site too

Punta del Hidalgo has also been popular with people who are interested in UFOs, and organised sky watching has been carried out from the location. Back in January 1999, it was reported that alien beings and a landed craft were seen by a married couple.

They had parked their car near the small beach and they claimed that they saw a semi-spherical craft land in front of them. They said that a group of tall long-haired beings got out of the glowing craft, and that they walked about before getting back in and departing.

How much truth there is in that story I couldn't tell you but it sparked the interest in the place. It does have a strange and remote feeling to it there though, which is added to by a very derelict building that you pass on the track that leads down to the beach.

Further back down the road from this part there is the main part of the village with houses and bars and shops and restaurants. Just a short way further along the coast is the popular resort of Bajamar.

Bajamar is known for its natural swimming pools. It was once a humble fishing village but developed into a resort town over the years, although it is much quieter and more relaxed than those down south in Tenerife. Nevertheless it has an attractive seafront and plenty of restaurants, shops and bars.

Because the seas can be rough in this part of Tenerife most people prefer to make use of the swimming pools in Bajamar that are filled with salt water.

The beach in Punta del Hidalgo is covered in grey basalt rocks and pebbles and it also has many large rock pools.

The mountains and cliffs of the area of Punta del Hidalgo are of particular interest to naturalists and botanists because some rare endemic species can be found there. The spectacular white-flowered Viper's Bugloss (Echium simplex) still grows wild on the rocky coast in Bajamar and Punta del Hidalgo although it is very rare now.

Fortunately, its tall attractive flowering spikes have made it popular as a feature in gardens and parks where it is often planted for its ornamental value.

Bajamar and Punta del Hidalgo are easily reached on the regular buses from La Laguna. They have a very different atmosphere to them and are well worth visiting.

Where is Punta del Hidalgo? 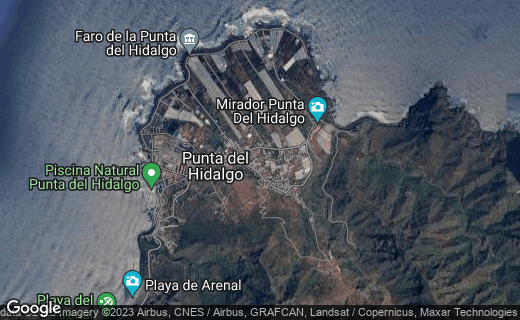