The Sailing Rocks of Death Valley

Racetrack Playa is a dry lakebed located near Death Valley, California, and home to moving rocks. These rocks leave trails in the lakebed surface as they move across it, and though no one has ever seen them move, we can trace the path they have taken.

These rocks and how they move is quite a mystery, something people have been studying for a long time to try and figure out, but though the area has been studied by many people, we still don't know the exact mechanics of the rocks' locomotion though we are getting closer all the time.

Racetrack Playa Location - In comparison to LA and Las Vegas 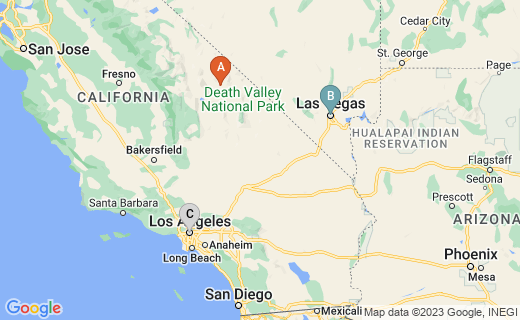 About the Moving Rocks of Racetrack

Out on Racetrack Playa, there are scattered rocks. They look oddly out of place, as though carried there by some unseen hand, but the trails left behind them tell a different story. Somehow these rocks, many quite large, have moved across the dry lake bed leaving a track behind them as they went.

Rocks Around the Playa

Rocks from the Hillside

On a Collision Course

Overview of Some of the Rocks

A playa is a dry lakebed.

Racetrack Playa is a cream-colored playa or dry lakebed surrounded by mountains in a little valley near Death Valley, California. It is the playa that the sliding stones move across.

Racetrack Playa is almost completely flat, though it does have the tip of the nearby bedrock sticking out at one point. That area is called the Grandstand in honor of the racing theme.

What Causes the Moving Rocks?

No one is quite certain what causes the sliding rocks of Racetrack Playa to move. There are many guesses, but most authorities on the subject agree that it has something to do with the playa surface when exposed to water, and extreme winds that go through the area occasionally.

The moving rocks need water. Since the surface of the playa is made up of fine, dry clay, when it is exposed to water each individual soil molecule is encased by water, allowing them to move against each other with very little friction. If you've ever stepped on wet clay, you may have experienced this slipperiness by falling on your butt trying to stand on the stuff. Now obviously, it takes certain amounts of water for the exact right slipperiness. Too little rain falling on the dry playa surface, and it won't get very wet. Too much rain and the water will pool up on the clay's surface. But, if just the right amount of rain falls the clay will get just the right amount of wet and perhaps be slippery enough for the rocks to slide across the surface with the right push.

The moving rocks need wind. Because of the shape of the valley where Racetrack Playa is located, it can act as a funnel and aim the winds that rush through straight at the playa. Deserts can have some extreme winds since they have little vegetation to slow it down, and the Death Valley area is no exception.

The theory is that in the right conditions, enough rain and enough wind, the slickened surface of the playa allows the rocks to slide across it when propelled by the winds.

The moving rocks may need ice. Another part of the premise is that ice may be involved. This is highly debated though. Many people think the surface area of the rocks is not enough to be propelled by the wind, unless it is distributed over a wider area than the base of the rocks themselves. They theorize that the rocks may be surrounded by ice, forming little ice rafts, and that this spreads out the weight over a wider area, allowing the wind to be able to propel them along.

Ice does in fact form in the area though it is the hottest place in the continental US during the summer, but many debate whether the ice is in fact necessary. Ice rafts would help explain why sometimes rocks next each other move in the same directions at the same time, leaving parallel scratches in the playa surface.

Racetrack Playa from the Sky

Racetrack Playa and the Grandstand

The Road to Racetrack

The bumpy rocky road to Racetrack Playa in Death Valley. Starting at the Ubehebe Crater, this is an incredibly difficult 28-mile road, especially for inexperienced offroad drivers. There is a very pronounced "washboard" effect on this road, meaning there are grooves cut into the road that make it a very bumpy ride. The best strategy is to take the road slowly, somewhere in the 15 mph range.

Finally, cell phone coverage is nearly non-existent on Racetrack Road, though some say that they are able to get a signal near the Teakettle Junction area. Keep this in mind if you ever venture this way.

Be Safe on the Racetrack Playa Road

The road to Racetrack Playa is not to be undertaken lightly. It is 27 miles of washboard dirt road that can cause extreme mechanical difficulties, in a place with little cell phone service, in place where even AAA isn't in a hurry to come rescue you. A high-clearance vehicle is recommended, as well as a vehicle in good working order. It's a good idea to have at least some of the following with you:

At least one spare tire, but two is better

The person from the picture above had quite a trip to the playa, check out his story about traveling on the road to Racetrack Playa at: click here

Along the way between Ubehebe Crater and Racetrack Playa is a little spot called Teakettle Junction. It's at a split in the road and features a sign that has become adorned with teakettles. It's a whimsical little spot and many of the teakettles have photos or notes inside of them.

What do you think of Racetrack Playa?

5 out of 5 stars from 1 rating of Racetrack Playa