Retroland: Disneyland Through the Ages - Part 1

“Disneyland is not just another amusement park. It's unique, and I want it kept that way." --Walt Disney

"It's something that will never be finished. Something that I can keep developing...and adding to." --Walt Disney

Each visit to Disneyland brings something new and different to experience. Whether it’s a new ride, a new show, a new parade or a new offering at one of the resort restaurants, Disneyland likes to keep things fresh and exciting for its guests.
This means that certain attractions come and go over the years. Such changes can be viewed by guests as good (such as the addition of the Peoplemover in 1967) or bad (such as the Peoplemover’s conversion into the ill-fated and briefly-lived Rocket Rods in 1998), and some guests would prefer it if the park were static and never changing.

But the fact remains that the park does and will continue to undergo changes. Still, it’s fun to take a look back to see what attractions thrilled guests years ago, and mentally compare previous amusements with the attractions currently in the same location. In this first of a series of Retro Disneyland articles are just a few items culled from the way-back machine.

Where R2D2 and C3PO now stand ready to take you on a galactic journey with Star Tours, there once loomed a grand adventure that sent guests through a magical machine that shrunk them down to the size of molecules. It was an Adventure Thru Inner Space; a perfect marriage of theme park attraction and science fact (well, except for the guests-actually-shrinking part).

For those unlucky enough to have missed ATIS, and for those who did enjoy the thrill of this ride in person and would like to experience it again virtually, check out the Adventure Thru Inner Space Virtual Ride Thru--here’s a sneak peek:

You can find out more about this attraction at TheMightyMicroscope.com and there, you can also purchase the full-length video recreation of the whole attraction, including the original soundtrack and brilliant narration by legend voice actor Paul Frees.

Not far from Star Tours, furry muppet-like creatures and a full-sized Rock ‘Em Sock ‘Em Robot help their captain turn evil bad guys into orange-jumpsuit-wearing, drill-team-dancing good guys in the re-release of a 3D film starring Michael Jackson. But before there was “Captain EO Tribute;” before “Honey, I Shrunk the Audience;” before the original “Captain EO;” before the Space Stage and even before the Tomorrowland Stage, this spot was the location of a very cool, albeit troubled, space-themed attraction called Flying Saucers.

Imagine, if you will, shrinking yourself down to the size of an air hockey puck (perhaps you remained on the ATIS ride too long). In the center of the puck is a seat where you can sit comfortably and grab a hold of handles on either side of you. You hear a WHOOSH and suddenly, your craft is aloft on a cushion of air. Leaning in various directions, you guide your puck through a circular arena, jauntily ramming your floating vehicle into other flying saucers. It’s bumper cars for the space age. 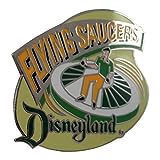 Unfortunately, the saucers experienced malfunctions on a regular basis, and the attraction closed five years after it opened. But you can still play air hockey in the nearby Starcade.

Of course, “everything old is new again,” and trotting out an old idea and giving it new life sometimes results in a dream come true; in this case, in the return (or rather, reincarnation) of a beloved retroattraction. In the summer of 2012, an updated version of the Flying Saucers attraction will open in the new Carsland area of Disney’s California Adventure, just across the promenade from Disneyland. Here’s a preview of what will be called Luigi’s Flying Tires:

There once was an exotic place in Disneyland, where drums beat fiercely and torches flickered in the night as Polynesian meals were served followed by Polynesian dancers demonstrating traditional native steps. This was the Tahitian Terrace, a dinner theater venue right next door to Walt Disney’s Enchanted Tiki Room. For more than three decades, this venue enjoyed great success and guests enjoyed delicious meals with exciting entertainment.

Then, in the early nineties, the Tahitian Terrace was closed down in anticipation of something new and different...

The “interior” of Aladdin's Oasis (which is actually an outdoor dinner theatre design) is just as ornate, embellished with gorgeous peacock blues and royal purples accented with gold. Rich fabrics in various colors and designs drape overhead and exotic lanterns of unique designs throw off pockets of subdued lighting here and there. It’s quite romantic.

And, it’s rather spacious, particularly due to the fact that no one comes in here anymore. Aladdin's Oasis originally kept the location's dinner-and-show theme, serving meals capped off with a little chocolate genie lamp for dessert, with a (truncated) stage production of the Aladdin story as a side dish. Sadly, the genie didn't conjure up massive hoards to visit the attraction, and the Oasis turned into nothing more than a storytelling venue. A few times a day, a storyteller would share the basic Aladdin story using puppets, and Jasmin and Aladdin themselves would pop by. This whole lovely venue was used only briefly each day to tell a (very truncated) story to the few children who discovered that this place even existed, and to give parents of little ones a welcome chance to rest for a few minutes.

Disneyland: Hard Cover 2008
This book by renowned Imagineer and Disney historian Bruce Gordon takes you through the Disneyland of yesterday, today and tomorrow.
Buy Now

In the background of the picture above, you’ll see a portion of the Tiki Room attraction. That’s how close the Tahitian Terrace was to the Tiki Room; it was, essentially, an extension. The long-running Tahitian Terrace dinner show was booted out with hopes that providing a “fresh” dinner theater themed to the popular animated film Aladdin would boost attendance in this venue even more. It didn’t. After two years, Aladdin’s Oasis dinner theater closed down, and now this valuable plot of real estate sits idle most of the day. In fact, as of this writing in spring 2011, storytelling at Aladdin’s Oasis is not even listed on the weekend schedules anymore, although you may still catch the Jasmine and Aladdin walk-around characters outside now and then for a quick photo op.

Next time you’re at the park, if you’ve never done so before, take a step inside the Oasis and have a look around for yourself (you won't disturb anyone).

But take heart: in the meme of "everything old is new again," a re-boot of the Tahitian Terrace will open on the Disneyland Hotel grounds in late spring of 2011. As part of the Disneyland Hotel remodel, Tangoroa Terrace and the adjacent Trader Sam’s will open their doors for business. While it won’t be quite the same--there’s no mention of lively Polynesian dancers, and the food will be quick-service style rather than sit-down restaurant style--the Tangaroa Terrace restaurant and its accompanying bar, Trader Sams’s (named in homage to the famous trader one meets at the end of the Jungle Cruise ride) will bring a touch of nostalgia to older Disneyland guests and, hopefully, a delight of tiki whimsy to younger guests who never knew the original Tahitian Terrace.

The next time you visit Disneyland, look at the park through historic eyes and think of Walt’s famous declaration at the park’s opening in 1955:

“Disneyland will never be completed. It will continue to grow as long as there is imagination left in the world.”

What are some of your fondest memories of Disneyland attractions from days gone by? Share your recollections in the comments section below.