I cannot believe that it has been fifty years now since I served as a park ranger naturalist (now known as "interpreter"). I was one of twenty-two, to guide and entertain people on all-day wilderness hikes, nature walks, museum tours, and evening campfire programs at Rocky Mountain National Park, Colorado. Back in 1959 and 1960, 1.4 million visitors came to this national park, less than half today's anticipated figure of a touch over 3 million.

Is it still possible to experience the joys of the wild in Rocky Mountain National Park, the joys of Enos Mills (father of the park) back in 1915 or even the joys of 50 years ago? Let me share some of my experiences. Earlier in the summer I experimented by hiking on a Wild Basin trail to Ouzel Lake, camping in popular Longs Peak Campground, and attending a Moraine Park campfire program. The results of my experiment may have been lucky, but perhaps not.

From the trailhead at the Wild Basin ranger station up to Ciopeland Falls, a distance of less than a half mile, I passed perhaps two dozen people, including some Germans commenting on the clarity of the stream water. Hummingbirds buzzed like crickets among a colorful array of golden banner, rosy paintbrush, and yellow heart-leafed arnica. The gushing rapids of a nearby stream more than drowned out the sounds of shouting children and even snorting trail horses.

Between Copeland and Calypso Falls (another mile), I encountered two horseback riders and scores of hikers, some of whom stopped to photograph or simply to admire clusters of blue Colorado columbines and purple chiming bells. Practically everybody seemed to be friendly and enthusiastic in their enjoyment of their company and of the sights along the trail.

The crowd thinned out considerably between Calypso Falls and Ouzel Falls (two miles farther). Each quarter mile I encountered only two or three hikers. For the first time I began to get that old feeling back--the feeling one gets when he listens to the plaintive notes of a Swainson's thrush echoing through aisles of spruce and fir.

I stopped to chat with several others in the midst of a 1050-acre burn between Calypso and Ouzel Falls. We remarked on how scarred the forest still seemed since the blaze of August 9, 1978. Since the fire burned along a ridgetop, much of the topsoil has been washed away by rains, leaving a band of charred earth punctuated every now and then with bright clusters of golden banner and young saplings. This swath of dead trees gave me an eery feeling as though I stood in a fire-bombed Dresden or Tokyo back in the mid-1940s.

Between Ouzel Falls and Ouzel Lake (about one mile) I saw only four other hikers. At a set of falls just before Ouzel Lake, I stopped to watch a water ouzel or "dipper," John Muir's favorite bird. Muir put it well--one experiences the ultimate joy of the wild by simply watching the ouzel dive under water for insects and the like. Muir surmised that even on Judgment Day this little bird would sing its heart out in the mountainous solitudes.

Yes, the mountainous solitudes of the Wild Basin remain serene despite the crowds of people in the lower vales. There's nothing for the soul quite like naked granite flanked with jagged streaks of snow. But I had yet to face Longs Peak Campground. Children ran in and out of my campsite at first, but once I set up my tent and lit a campfire, they remained with their parents. I had a friendly chat with two or three campers about their hikes up Twin Sisters Mountain and about what they intended to do or see the next day.Some noisy teenagers cruised into a nearby site and played their stereo full blast, but soon obliged others by turning their music completely off! So far, so good. I had a great night's sleep and cheerful breakfast of hot coffee and cereal.bars.

After a short hike to the site of an old gold mine and a nice lunch in Estes Park and a brief ramble nearby, I found that time passed quickly for the next evening's campfire program in Moraine Park. The ranger handled a crowd of fifty or so very well despite crying babies and over-talkative children. As he showed a color slide of an alpine sunflower and explained that it takes seventy-five years to bloom only once for two short weeks, coyotes began to yelp and howl across the moonlit meadow.

He stopped talking and said, "What they have to say is far more interesting. Let's remain silent and listen." And listen we did. Even babies quieted down. It was a great coup for the ranger; hardly could he have done anything more appropriate.

Back at my silent Moraine Park camp, I quickly dozed off dreaming that fifty years had never passed and that I was climbing Longs Peak again with other rangers. From atop Longs Peak we could see the whole Front Range caught in the golden glow of a sunrise as real in my mind as the dawn I was about to experience. And at 5:30 a.m., I awakened to the howling of coyotes, howling from some mountainside not too far away. I'm glad to say that I have revisited this national park over a dozen more times in the past ten years.

Readers interested in RMNP should know about the Rocky Mountain Nature Association which sponsors talks, hikes and publications. Now in 2012 Rocky Mountain National Park has twice as many visitors (1.5 million) as it did when I was a ranger in the early 1960s. 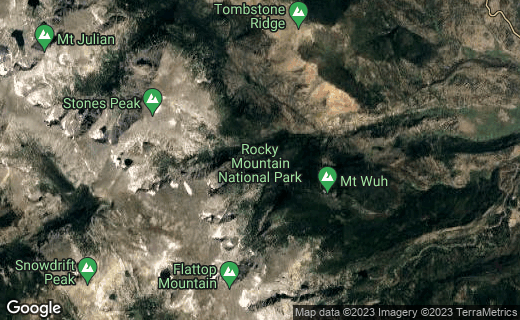