Ms.Treadwell is a licensed attorney and the author of "How Do Hurricane Katrina's Winds Blow: Racism in 21st-Century New Orleans."

It is strange how some places hold a very special place in the human heart. The activities and the people we share them with create an emotional attachment to a particular place. Some may think of sitting in the stadium at a ball game with their father or a camping trip where their family stayed up all night telling ghost stories around a campfire. When I recall the places I have visited during my childhood, the one that holds the greatest emotional significance for me is Rockefeller Center in New York City.

We always lived within an hour's drive from "the City," which is what New Yorkers call Manhattan; so we were able to enjoy all of the excitement without the daily hassles. It was a family tradition to visit Rockefeller Center each Christmas season. There is no doubt that it is a "Winter Wonderland." The air in the City in December is clean and crisp, unlike the bitter cold in February. The aromas in the air were fantastic: chestnuts roasting; big, warm, and soft pretzels with Kosher salt; Sabrette hot dogs with sauerkraut and red onions; and the smell of the pine and spruce trees that decorated the center. We would pass the tremendous statue of Atlas, who held the heavens on his shoulders, into the Promenade and gardens. Breathtaking rows of sculptured angels bearing trumpets, covered in twinkling lights were a remarkable sight. Each store window was in competition with another with their animated figurines "acting out" different holiday scenes. I would walk holding Mom's hand with my head tilted back, in a sense of wonderment.

My Daughter Dancing in the Street

As we strolled through the Promenade, a sense of excitement would continue to build in my chest. The beautiful art deco carved into the limestone and granite buildings nearby would always be my clue that we were going to Radio City Music Hall for “The Christmas Spectacular.”

I would bounce and beg my parents to take me to see the “world famous Rockettes,” a dance troupe of ladies known for lining up and kicking their legs high. I loved their “Dance of the Wooden Soldiers” routine; and I would shout with delight when they would line up before a cannon. Once the cannon “exploded,” they would fall carefully like a row of dominoes. I never left a show without pretending I was a Rockette, too. 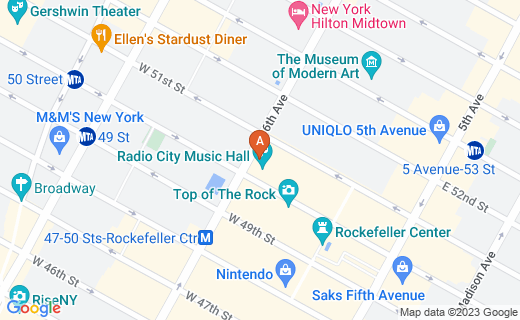 To see one of the best live holiday shows ever go to:

Me at Sunken Plaza

After leaving Radio City, we would always stop to gaze at the Rockefeller Tree – the largest, most beautiful Christmas tree in the world. Usually between 75- and 90-feet tall, the Norway spruce would be covered with tens of thousands of lights. Beneath the tree, a huge, gilded sculpture of Prometheus appeared to watch over the people upon the ice rink in the sunken Plaza. Annually, there is a celebration show here on the day of the tree lighting.

As a child, I would lean over the short wall to get a better view. Children skated on wobbly legs, while couples skated around them holding hands. I would ask my parents hundreds of questions about Rockefeller Center: “Who built this, who is that a statue of, how big is that tree, how many lights are on it, can the skaters see me, and what are these buildings made of?” I am certain I drove my parents close to madness with all the questions and the fact I just could not stand still

We never went home without visiting Saint Patrick’s Cathedral, which was just across the street. A devout Catholic family, we had been to several beautiful churches, but none as grand as this gothic cathedral. Certain this was where Jesus and the Pope lived, I thought no would admit it to me so I would not disturb them.

The most noticeable contrast was the sense of peace upon walking inside the great cathedral. Hundreds of people walked through to view the sculptures, numerous altars, and stained glass windows; but one would never know there were so many people since they were so quiet and reverent. It was so different from the bustling city just outside the door. With a quarter from my parents to light a votive candle, I would thank God for the wonderful day, and say a prayer that my father would buy me a hot, soft pretzel before going home, which he always did.

What would you like to see most in Mid-Town Manhattan during the holidays?

For more information about the holidays at Rockefeller Center

There are other things to see and do at Rockefeller Center.

Those memories are so precious to me because they were some of the most enjoyable times of my life. I never forgot the sense of wonderment I felt as a child no matter how many times I visit Rockefeller Center.

I used to work 30 blocks away from it but I would walk there on Fridays after work. Surely, I could have taken the bus, but I always enjoyed the walk. The center has beautiful gardens during the spring and summer; and the sunken plaza is a café during those months.

Interestingly enough, I still prefer to visit Rockefeller Center during the Christmas holidays because it is just not the same for me during any other season. It has been a long while since I have done that, since the feeling is different without both of my parents there to hold my hand and answer all of the questions I have. The visits I made by myself just made me homesick. Still no other place in the world warms my heart like Rockefeller Center, the heart of New York City.

Cast your vote for Christmastime at Rockefeller Center