Sailing North to the Bay of Conception . . .

Leaving La Paz seemed to set me free, sailing through the islands toward unknown waters and new discoveries was all I had hoped for . . . A single-hander’s memoir of voyages and adventures sailing the coast of Baja, the

Sea of Cortez, and the Mexican Riviera, from the journal and ship’s log of the sailing vessel LOCATION . . .

Everything in my life depends on the wind it seems. This morning it was not blowing in my direction, or at least not in the direction I wanted to go. Interesting . . . no matter where you want to go or where you are, the wind always blows at you. During the night it shifted, and now it is blowing at me from the north. There are six of us now anchored in the bay. White caps scatter across the open blue water outside, whipped by the chilly north wind; inside we have shelter and calm. None of the other boats are making ready to move either, and so I assume we are all heading north, eventually, with no wish to buck the wind and waves today. If it all depends on the wind then why fight it . . . new plan: stay, relax, and enjoy this little piece of earth and sea until the wind changes its mind.

San Evaristo is an isolated fishing village scattered along the shore and foot hills of a small half-moon bay pinched out of the Baja peninsula in the middle of the San Jose Channel. It exists somehow at the end of a dusty single-lane road, sixty-five miles or so north of La Paz. The bay water is green, well sheltered and enclosed on two sides by a semi-circle of tall craggy mountains, through which the narrow road climbs and disappears into jagged canyons and desert. The mountains plunge to rolling foothills and bluffs that slope and slide further down and settle along the thin sandy beach that fringes the bay. A rocky spit of land hooks out from the south end of the bay forming a jetty on the east side, with a small hill on its point that holds a constantly sweeping light beacon on top of a short rusted steel tower to guide the fishermen home. The long desert hills of Isla San Jose give it shelter from the east, five miles away across the deep channel.

The first time I saw San Evaristo was two years ago, on my way up to Loreto. I was picking up friends there, and we were going to sail back to La Paz. I was single-handed then also, and had spent most of the night peacefully anchored along the shore of Isla San Jose. Deep asleep, I suddenly awoke with a swarm of jehenes, literally eating me alive. It was pitch dark as I scrambled up to the helm, swatting and cursing the nasty little gnats. The only way to escape was to flee out to sea, pray that the wind would keep them at bay.

I raised the anchor and raced into the darkness, as the little demons continued to pick at my naked body. There were rocks before us in the dark, but they were the least of my worries - escaping the jehenes was first and foremost at that point. The light at San Evaristo, sweeping across the black water that night, guided me out to deep water and clear of the rocks, and the sun was just coloring the sky behind me as LOCATION passed by the bay entrance. I didn't stop then, still thinking about the little devils behind me, but Ledean and I came back several months later, and spent a quiet weekend there, before the world flipped over on us.

The village still has no electricity or other central utility services, but now I can discern small patches of change and improvement. Most of the homes along the shore are built from scrap materials with sloping thatched or tin or invisible flat roofs. But progress is encroaching, and there are now several new brick and stucco houses up on the hills above the bay, one painted white, one pink, and another bright green, further up the hill surrounded by cactus. Little corners of the earth like this seem to move independently of the rest of the world—I doubt the recession had any impact here. I doubt that the people even knew, and certainly didn’t care, that the rest of the world lost so much.

Another house is under construction on a slope just above the elbow of the south jetty with a large black plastic water tank perched above one corner of the roof, which indicates the likely inclusion of indoor plumbing in its design. Most of the building is still in the early stages, and vultures have taken to perching themselves atop the unfinished vertical wall studs that stick above the ceiling joists. At times there are five or more of the preying birds sitting calmly like guardian gargoyles, surveying the desert around them. Progress may be coming, but this is still Baja Mexico.

The most distinctive feature of the homes, whether ramshackle or not, is the covered carport, some attached, some not attached but closely adjacent, and the resident pickup truck that occupies each of these shaded alcoves. Some of the houses have two pickups, and in most cases the carports protecting the vehicles are at least as large as the living quarters of the house.

In front of these homes on the shore are the pangas, traditional outboard powered fishing craft, the only other way in or out of the village. The narrow twenty-foot boats rest, brightly painted, scattered along the shoreline, some pulled up on the beach, others lying at shallow anchor with their large-headed outboard motors cocked up at an angle, propeller flying above the transom. In the morning, the fishermen who live in the ramshackle dwellings along the shore race their pangas out of the bay to go fishing. In the evening the successful ones return with their catch and race back and forth across the harbor to visit one another or just shout a boastful greeting to a friend. Some of the pangaderos return early in the day and coast through the cruising boats at anchor to sell lobster, or dorado, or snapper to the touristas.

The seabirds also fly in and out and back and forth in the bay, skimming the water, circling and diving, and gathering, yammering, screeching, and squawking, over a boil of bait-fish pushed from below by other predators in seeming conspiracy with the birds above. The birds never seem to subside. At times you can hear the halting crow of a rooster complaining from the shore, and watch a small dog chase into a gaggle of gulls on the beach.

As with many of the small villages along the isolated areas of the coast in Mexico, people tend to rise and retire with the sun. Activity and lights are rare after dark, except for the sweep of the beacon light on the point at San Evaristo.

I was up at seven this morning after a blustery night of southwest winds. All the fishermen had left the harbor, and most of the other boats in the bay were making pre-departure noise and preparations. Stu, on WALK-ABOUT, forecasted over the radio continued southwest winds, but once I got fed and ready to go, the wind had changed and was blowing softly from the northeast. A thin silver fog hung low along the base of Isla San Jose across the dark water. WALK-ABOUT and WINDWARD both sailed out before me, and I could see their sails to the north, no doubt motor-sailing against the tight angle of a moderate breeze. I motored off the hook and then raised LOCATION’s main sail, and partly due to the wind and partly because the batteries could use a little charging, proceeded up the San Jose Channel under motor-sail.

Around the north point, above San Evaristo Bay is a large, sanguine cove with more fishermen's houses called Playa Panteon, suitable for five to six vessels at anchor, with good protection from south and west winds, but wide open to north and northeast winds. The way the air switches around in this channel, I was happy that I had chosen San Evaristo instead. 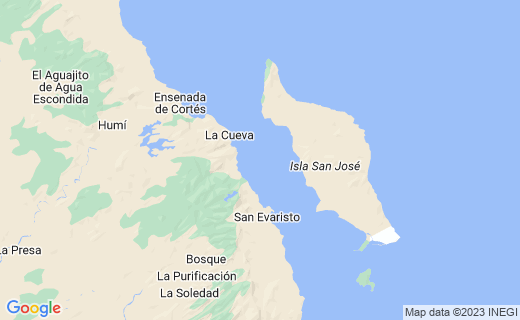 My course to Agua Verde was NNW 340 degrees (true). The wind was straight out of the north, hard to hold under sail, but I had several hours of engine-time-credit and so motor-sailing was fine for the time being. As I may have explained before, my goal is to run the engine no more than an average of one hour per day, which should give me seventy-five days of fuel capacity. So far, the batteries seem to be good for about four days with just the solar panels filling in, before a little engine charging is needed to bring them back up to full power. Of course that depends on how much electricity I use, but I don’t use the microwave much, and I don’t read very late at night. Running the engine also allows me to run the water maker and replenish my potable water supply.

The wind filled in and continued from the northeast, and I was able to sail and hold our course most of the afternoon in moderate seas toward Punta San Marcial. We averaged about four knots per hour, but the weather was warm, the seas were benign, and I was in no hurry. By four PM it was evident we would not make Agua Verde before dark, and with the breeze starting to diminish I tacked and headed toward land to look for an anchorage.

There were a couple of masts visible through my binoculars in the cove south of San Marcial. I searched the coastline south and checked my charts, settling on Bahia Berrendo, which looked empty a couple of miles south of the point. The shadow of the mountains crept toward us as we sailed west. The sun was below the brindled mountain ridge, painting the bottoms of thin clouds in the gray-blue sky with splashes of orange and violet, when I dropped anchor in the pristine and quiet cove. The air was still warm, and I stripped off my shorts and dove over the side of the boat, finally taking my first swim of the year in the Sea of Cortez, washing away the angst of civilization that had clouded my soul.