So, you have scored yourself some tickets to the world’s most famous event – the world cup. Congratulations! This year it’s being hosted in the country that prides itself as the “originators of football” – Brazil. As a seasoned traveller to this beautiful country, I have had to learn the hard way on how to really be safe and enjoy my journey. It’s a shame that the majority of travellers who head to Rio usually go back home devastated and disappointed and vow to never return to this country because of experiencing the harsh realities of what Rio can do to you if you are unprepared. This hub aims at educating both first time travellers and seasoned travellers on how to be safe and handle yourself so you enjoy the best of what this city has to offer. Here are some seven safety tips to use whilst you’re roaming around Rio:

If you are planning to travel to Rio, get a group of people to go with – preferably a group of minimum six people. Never attempt to travel to Rio alone, regardless of whether you are Rambo or Tinkerbell. Tourists are easy prey and targets for locals so if they see that you are alone, you will only invite trouble upon yourself. Even if you are going to a public toilet, do not go alone. Always have somebody you know and trust next to you at all times. If you are a girl or a woman, always have a guy or guys you know next to you. If you travel as girls only, you are deemed as singles that want fun or prostitutes. Yes, I know it’s shallow and stupid but remember this isn’t the west where women have freedom. If you travel with a guy or guys, it will not invite a lot of unwanted attention. Avoid walking in dark corners or narrow streets. At night, make sure you are with your group at all times and do not separate from each other.

PUT ON THE AWARENESS RADAR!

This is the base point of every traveller regardless of where you are going. In Rio the streets and beaches are constantly jam packed with people and when they are events like the world cup or the carnival, it’s five times as packed. The city is well known for pick-pocketing so be very aware of your surroundings and keep your guard up. Don’t move around like a headless chicken with no sense of direction. Be super observant and vigilant. Trust your instincts and don’t talk to anyone you don’t know. Brazilians are very friendly people but they use that against you so don’t just be friendly to anyone who smiles at you.

Will you be travelling to Rio for the world cup?

This is one of the most common ways that tourists are attacked in Rio. The perpetrators usually stage a scene that needs a Good Samaritan (like a girl being raped or a man being robbed) to come to the rescue only for you to be brutally attacked and in rare instances killed. So no matter how tempting it is to rescue someone in distress, never attempt to involve yourself in rescuing someone you don’t know in trouble. Just walk past it like you can’t see anything and worry about it when you’re safe and sound.

HAVE FANCY GADGETS & VALUABLES? DON’T BRING THEM ALONG!

I know, you need to take decent photos and videos but if there is one thing that screams “rob me” is when you flash your phones, tablets and jewelry. Buy a cheap camera that can take photos and videos. Never carry a handbag or a backpack. Be as empty handed as possible. Leave your passports and valuable stuff at your hotel security. Ladies, avoid wearing any jewelry or bangles or rings. Guys, do not wear baggy pants with a thousand pockets. One trick I use that works for me is that I wear a very hairy wig and pin my money inside of it, or I put it in my underwear. When I want to go shopping, I go to the bathroom take it out and wrap it in a newspaper or magazine so it looks like I’m only carrying reading material. Avoid carrying credit or debit cards and always have spare cash on you.

AVOID DRUGS &ALCOHOL AT ALL COSTS!

So many tourists are banged up abroad because they always neglect the one rule that outside countries don’t tolerate – drugs. Even though Rio is one of the drug capitals in the world, if you are caught with them, it’s goodbye to your life basically. The penalty for being in possession of drugs is a minimum of eight years behind bars and it doesn’t matter if you have an ounce of it or a ton of it. The Brazilian legal system is slower than a snail so if you’re a foreigner and caught with drugs, you are almost as guilty as charged. If you drink alcohol, do not get completely drunk. Do not accept drinks from anyone you don’t know. Drink spiking in Rio is very common so order your own drinks and keep sober at all times. There is always a party on every corner so don’t get grossed in by a pretty girl smiling and flirting with you or a guy that is superbly friendly. Most of them are predators so be very watchful of your surroundings. 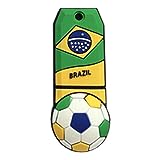 .. dress as Rio! The most common dress attire is shorts and flip flops especially during this world cup time. So if you've dressed up like you’re going on a safari with six pound climbing shoes with trousers that have a million pockets then you've just invited unwanted guests. The rule in Rio is this – dress the part so you won’t depart – You need to look as local as possible to avoid unnecessary attention.

GO AROUND THE CITY SECURELY!

Travelling around Rio is a pain due to the high levels of traffic jams and pollution. In order for you to experience hassle free transportation, I high advise you to avoid the minivans that act like taxis. Not only are they a driving hazard but majority of them aid in kidnappings and robberies. Use registered taxis or the city shuttle buses. Better yet, rent a car and drive by yourself which is the safest mode of travel. If you need a guide, use the ones your hotel provides and makes sure they are certified guides. Better yet find someone you know that knows Rio very well and use them instead.

The bottom line is doing your research before you travel to Brazil. The more prepared you are, the more you will enjoy your stay with peace and comfort. Make sure you get as much information from your embassy on the travel warnings and updates. Get information too from those you know that have been to Rio. If you don’t know anyone who has been to Rio, then use good old Google and other search engines. I hope these tips will be helpful to your trip. Have fun but be safe as well!