Approaching the town of Salisbury, in central southern England, from any direction, the eye is drawn to a tall, elegant cream coloured spire which dominates the town and surrounding area.

As one draws nearer, the details of the building at the base of the spire become visible.

It, too, appears cream coloured. It is a huge structure in the gothic style, solid, gigantic, yet beautifully in proportion. Salisbury Cathedral is a mighty architectural masterpiece, and impressively beautiful. It was built in just 38 years from 1220 to 1258 on a green field site a few miles south of Old Sarum where the previous Cathedral in Sarum (now Salisbury) had been.

It is awe-inspiring even to the 21st century traveller. The sense of shock, awe and majesty it must have created in the minds of 13th century pilgrims can only be imagined. It would have created an intense and long-lasting emotional experience.

Today the Cathedral is still an inspirational setting for majestic events and also for quiet prayer and reflection. It is situated in the largest cathedral close in Britain (80 acres) and contains the world's oldest working clock (from AD 1386) and has on display one of the four surviving original copies of the Magna Carta.

The layout of Salisbury Cathedral is conventionally symmetrical being cruciform (cross-shaped). The arms of the cross (together called the "transept") form an aisle across the building and there are two of them. Outside the cathedral there is a memorable octagonal Chapter House with vast windows and carved Old Testament scenes above the seat arcading. This is where the original monks or canons would hold their meetings about church business.

There is also a splendid arcaded cloister, the largest in England at 58m square, which was almost certainly a plain square of grass in the Middle Ages, around which the monks would walk and talk, but now has a great tree and is managed as a garden.

The impact of the great cathedral is enhanced by its stunning setting. It stands in its own walled precinct, called The Close, which is itself renowned for its unique beauty. Set in a gentle bend of the River Avon, it is a peaceful haven with a unique character, celebrated by John Constable in several famous paintings, which derives largely from the contrast between the relatively urban north section, and the more rural southern end where there are cottages flanked by trees, hedges and greenswards and where, beyond the Close proper through the water meadows towards the river, sheep graze, geese and ducks wander, and wildlife thrives. It is undoubtedly a magical environment.

The history of Salisbury and its Cathedral begins at Old Sarum, one and a half miles to the north of the present town. The site was originally a large Iron Age hill fort and had been occupied and abandoned several times over the previous five thousand years. In 1066 William the Conqueror chose Sarum as the location for a royal castle due to its position inside the hill fort, and initial defences could be constructed very quickly. The founding of an important religious community occurred soon after. In 1075 the bishop, Hereman, gained permission for a cathedral to be built at Sarum and when he died in 1078, the task of completing the cathedral was left to his successor, Osmund.

Osmund came from a high ranking Norman family and from his own wealth he provided funding for the construction of the cathedral and made an endowment of land to generate income for the cathedral in future. The cathedral he constructed was consecrated in 1092 but within days of completion it was badly damaged in a storm. Osmund's successor as bishop, Roger, led the rebuilding and enlargement of the cathedral soon after 1100.

Apart from the castle, the royal palace, and the cathedral, there was a large civil settlement at Sarum. Over the next 150 years, discontent with the inconveniences of the hilltop site increased. The clergy complained about the tiring climb to the site and the shortage of water from the single well, and tension built up between the military and religious authorities.

In 1194 Bishop Herbert Poore presented plans to move the cathedral to a more suitable site nearer the river to be called New Sarum, or now Salisbury. King Richard I approved the plan and Pope Honorius III consented to the move and detailed plans were drawn up to construct the new cathedral in water meadows on the banks of the Avon River, about a mile and a half to the south of Old Sarum.

Construction of the new cathedral began in 1220 with a formal stone laying ceremony and was completed in the amazingly short time of 38 years. Because of this it has, unusually, a single consistent architectural style known as Early English Gothic, characterised by the use of slender, pointed arch, windows. The cathedral is unique also in that it was built before the modern town of Salisbury existed which gives the impression even today of a cathedral standing in open country, in complete contrast to other cathedrals in England and the rest of Europe.

Six years after the start of construction the choir was complete, and the cloisters were added between 1263 and 1284. They form a perfect square and are the same length as the nave. Salisbury Cathedral's famous tower and spire were not part of the original building but were built later between 1320 and 1380. The same Chilmark stone as the main Cathedral was used and is a perfect match. The spire is the highest of its period in the world reaching to a height of 404 feet and the combined weight of the tower and spire is a dangerous 6,500 tonnes which has to be borne by the structure below. Due to the high water table in its riverside meadow location, the cathedral was built on only four feet of foundations, so it is remarkable that the spire still stands today after 700 years. Even today the large supporting pillars at each corner of the spire visibly and somewhat disconcertingly bow inwards by about 10 inches. The spire still retains the medieval wooden scaffolding used to repair it following a hurricane in 1362 and many of the timbers have been dated back to the 1250s.

Join the fun with Hub Pages 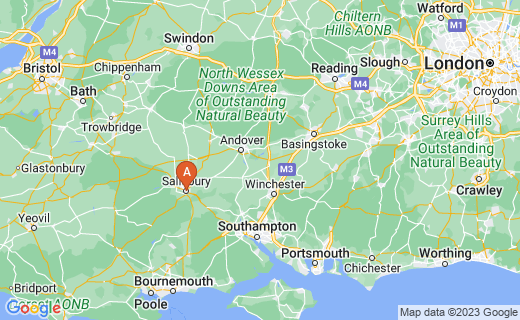 Salisbury is located in central southern England about 90 miles south-west of London.

The Most Beautiful Building in the World? Am I Mad?

Is Salisbury Cathedral a Contender for the Title