The Mystique of Alcatraz

Not every tourist attraction gets its own network television show (even if it did only last two seasons) plus several movies and many books - fiction and non-fiction - featuring it as an intrinsic part of the setting, plot, or most often both. Alcatraz Island is unique for many reasons, which I hope to share with you in the course of this article, but on first approach it's already clear that it offers something that has the power to captivate the imagination.

Some have already remarked on the fact that I write a lot about dualism in various aspects: light and darkness, life and death, fear and love, so on and so forth. Perhaps that is part of the explanation for my perception of Alcatraz as a place that is starkly dual to its very essence. Its history is fraught with strife, misery, and anger; but to go there now is to be amazed at the rioting glory of the flower gardens - tended by inmates of the prison at one time - and the rich variety of nesting wild birds who raise their young on what so many found to be inhospitable, brutal shores. It is a place equally remarkable for beauty and for ugliness; that in itself makes it, in my opinion, a truly worthwhile place to visit at least once if given the opportunity.

The day of our first visit to Alcatraz Island, the weather cooperated to perfection with the overall effect and mood. This will be evident in the photos, of course, but description in words is satisfying as well.

On the ferry to the island, and also when we first arrived, the island was shrouded beneath a dark blanket of brooding cloud. When we emerged from the tour of the interior (which I must admit was uncomfortable for me), the island was bathed in warm golden sunshine, the water a lovely turquoise-teal instead of slate grey.

This says quite clearly what I perceive to be one lesson the island teaches very well. Life, Death, Rebirth; all are present in breathtaking vistas here.

In practical terms, it's quite simple to google Alcatraz Island tours; it's also quite a simple thing to book the tour itself online, and print out tickets to bring with you in order to facilitate boarding the ferry quickly and with no headache. The prices vary with the season, but it is my opinion that the tours are never more expensive than they're worth. Everything about it is handled professionally, and both tours I've been on to Alcatraz went so smoothly it was difficult to believe I wasn't dreaming. 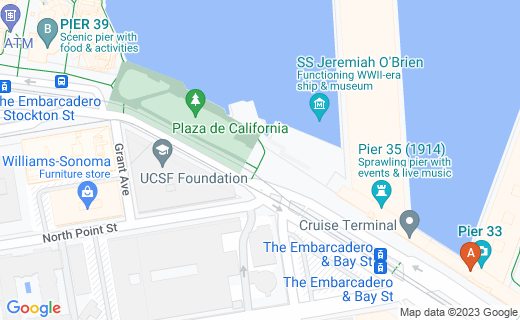 Pier 33 is where you catch the ferryboat to Alcatraz or Angel Islands. The nearby Pier 39 offers its own attractions.

Upon disembarking at the island, there is an orientation for everyone visiting in order to give a brief overview of the place's history as well as simple directions to enjoying the attractions. Although I do not believe it's actually required to stay and listen to the orientation, it's certainly beneficial, especially for first-time visitors.

This takes place between the dock and the entrance to what is now the museum, featuring artifacts from each major phase of the island's rich history as well as a film for anyone who wishes more information before proceeding with the actual tour. The orientation is given by a volunteer who often has some historic connection with the island as a prison; perhaps their father worked there as a guard, for instance. There are also brochures with a basic map available.

As mentioned above, following the orientation, you can go straight into the building in front of you, which is a museum dedicated to preserving the various phases of the island's history. These include Civil-War era cannons and several artifacts from the Native American claim once staked there, as well as the most notorious penitentiary phase.

Much of this building is subterranean, giving it a huge dose of atmosphere, lingering melancholy, anger, and despair. Painted brick narrow archways frame small rooms featuring well-placed displays and accompanying information on various points of interest.

In the main tunnel leading back outside (pictured below somewhere), there are nooks and crannies with further display items, as well as tiny arched wooden doors of mysterious origin and purpose. If you enjoy mystery and a general sort of Poe-esque atmosphere, this is a perfect place to begin this tour full of all of that - as well as startlingly vivid contrasts of hope, beauty, and life.

Emerging From the Tunnel

Toward the Prison House

Once you emerge from the tunnel exiting the museum, you begin to go uphill; for those who need it, there is a go-cart sort of shuttle to ride rather than walking.

However, if you are able to walk, it's well worth it to take your time and really examine the ruins lining the cliffs to one side of the path, as well as the gorgeously flower-lined cliffs leading up to the main prison house. There is a lot more here to see than I would ever have suspected, much of it delightfully hidden around corners or over fences.

Most of the buildings have signs posted by way of explanation, however brief, of the purpose - or purposes - they once served. The weather has taken a severe toll on most of the buildings, though there are varying degrees of ruin and preservation. The Meeting Hall, for instance, is roofless and mostly taken over by the wild, while there is an electrical plant further uphill that still appears almost entirely intact. There are also buildings that have been put to use as further display areas, some of which were still in progress when last I visited.

The ruins themselves have been largely taken over by seagulls and, less frequently here, other sea birds such as cormorants. They provide another contrast, building nests in the most unlikely-seeming places where humans once forged their own lives.

There are at least two ways to get up to the main prison house, where they give you a fairly brilliant audio tour full of history and evocative narration. More on that later!

First, there is a path upward near a steep, narrow staircase that is no longer in use for safety reasons, as well as a desire for preservation. The views as you proceed up this path are stunning, particularly on a clear day, when the San Francisco skyline is visible.

The second available approach to the main prison is slightly longer, and takes you directly past the morgue. This is not a place visitors can actually enter, which in my opinion is just as well. I got a very blurry photo through the thick glass into the interior, which despite its flaws has been called quite disturbing by some who've seen it. How atmosphere affects a person is largely an individual thing, so no doubt to other people it's simply a poor photograph of an old morgue no longer in use, interesting historically, perhaps, but with little relevance or effect on the present.

This destination is in fact so rich that I am finding it necessary to continue with the main prison house tour and conclusion in a separate hub; I hope some of you find this as fascinating as we did, and perhaps make it a part of your own travel investigations one day.

Next time - the main prison, the Battle of Alcatraz, the warden's house, the gardens, and more!