What are the Kelpies?

The Kelpies are a monument to the historical use of horses in farming and industry across Scotland. They are modeled on the heavy horses which worked not only on farms but pulled canal boats along the Forth and Clyde canal. The title also reflects the Scottish folklore attached to “Kelpies” as mystical water-born equine creatures.

Now one of the largest equine structures in the world, construction of the two Kelpies sculptures began on the 17th June 2013 after over eight years of planning and design by Scotland based sculptor Andy Scott who was already well known and highly regarded for creating public art at home and abroad.

The time consuming highly complex design and planning process ensured that the materials used (which Andy Scott ensured reflected Scotland’s former industrial power base as a producer of iron and steel), wind loadings and structural integrity were suitable for such large sculptures.

30 metres high and supported by a steel structural with a stainless steel outer skin each one weighs over 300 tonnes (300,000 kg). The outer skin reflects the natural light by day and is illuminated at night giving an almost lifelike appearance to the structures which seem to move with the constantly changing light.

The nighttime internal and external illumination change constantly from fiery red to cool blue echoing the colour changes experienced by the manufacturing processes of iron and steel which was once produced locally.

The Kelpies” were officially introduced to the world on the 18th April 2014 and along with the canal lock area and Helix parklands opened to the public on the 21st April 2014.

The Kelpies in Folklore

The Water Kelpie is a supernatural shape-shifting horse like water spirit that haunts rivers and streams in Scotland. It had a ravenous appetite for human beings and could take on many forms to lure strangers to their death.

Its usual guise was as a beautiful tame horse which the unwary would mount and then find themselves dragged headlong into the deepest part of the water to an early grave.

They were also said to warn of approaching storms by wailing and howling and the thrashing of their tail as they sank beneath the water was said to sound like thunder.

To tame a Kelpie one had to claim possession of its silver bridle which was covered in precious stones. The Kelpie would submit to that persons will as it would do anything to get its bridle back as it could not return to the water without it. With the strength and endurance of ten horses a Kelpie was indeed a highly desirable prize.

So if you are walking along some peaceful stretch of water and see a magnificent horse standing quietly by the edge, remember the old saying “If you want to live and thrive let the Kelpie stay alive”.

The two Kelpies are the main feature of a new built park (The Helix) near Falkirk (26 miles west of Edinburgh) close to the M9 motorway in Central Scotland. They are sited either side of a special designed canal lock and basin located on the Forth and Clyde Canal as part of the Helix Environmental Regeneration scheme.

The Helix is a 350 hectare park providing access to woodlands, waterways and parks situated along a pathway running east to west for almost 17 miles (27km) suitable for cycling or walking. 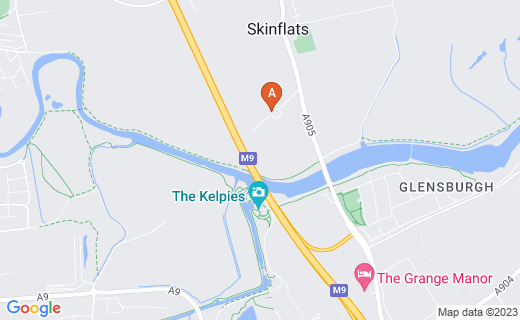 As well as visiting the site to admire the Kelpies there is a gift shop and eatery and guided tours which give a unique viewpoint looking upwards from inside the sculptures. The tours also include The Kelpies Tale and details of the history, engineering and art behind the structures.

Born in 1964 Scottish sculptor Andy Scott is a graduate of Glasgow School of Art who has completed over seventy projects across the United Kingdom and internationally with animals being a recurring theme of his work.

He specialises in hand-crafted figurative sculptures working mainly with galvanised steel, cast bronze and fibreglass. To create his striking landmark artworks he works regularly with structural engineers, fabricators, lighting designers and other specialists.

Before “The Kelpies” Andy was best known for his 4.5 metres (almost 15 feet) tall sculpture of a Clydesdale Horse situated on the M8 motorway running between Glasgow and Edinburgh.

Another iconic sculpture is the 10 metres (32 feet) high “Arria” (named after Arria Fadilla, the mother of Emperor Antoninus) which is located outside Cumbernauld 13 miles north east of Glasgow.